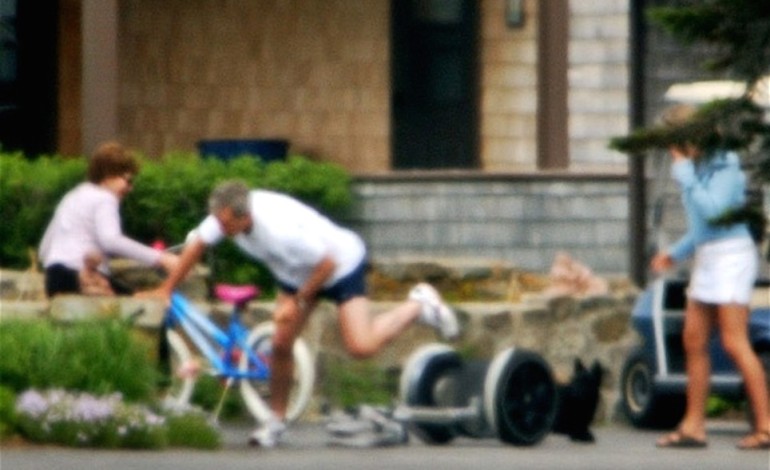 Usain Bolt was knocked over by a Segway driven by a cameraman after his 200m gold in Beijing on Thursday. The accident was watched by millions as a Vine video of the spectacular fall – and quick recovery – went viral.

It may appear to be a bit embarrassing for the athlete, but he shouldn’t worry. Not only was the fall handled with grace (he did a somersault, smiled, joked and carried on walking), but Segway falls are actually pretty common.

Maybe it’s because you don’t need a license to drive them. Here are some Segway falls to rival Bolt’s:

1. That time when George W Bush fell off a Segway

President Bush loses his balance while riding a Segway in 2003  Photo: AP

Usain Bolt handled his fall with far more grace than the former President of the United States. George W Bush existed before Vine, so all we have to mark the event is this very low-resolution picture, but it is still very funny.

2. The owner of Segway actually died using one

Bit of a dark one, but it’s certainly a worse Segway fail than Bolt’s. Jimi Heselden, the millionaire owner of the Segway company, tragically – and rather ironically – lost control of his Segway and plunged to his death off a cliff.

3. An entire 90 seconds of Segway crashes

It’s quite a satisfying watch – all of these people tried and failed to drive a Segway correctly. Your day is probably going better than theirs, and so is Bolt’s.

4. When Ellie Goulding got a face full of sand

The breathy-voiced singer experienced mild embarrassment after falling off a Segway onto a beach in front of paparazzi. She was wearing a very nice yellow shirt, though, and managed to get over it by drinking champagne.

This cameraman had a similar issue to the one who mowed down Bolt, but luckily didn’t manage to collide with two of the most expensive legs in the world. This guy was capturing shots of the Australia v India clash at the Melbourne Cricket Ground when he took a tumble. It was filmed for the world to see.

Two police officers in Idaho, US, found Segway training hard, and fell off, one shortly after the other. The whole film was captured and published by a local news site. Apparently they’ve since learned how to ride the things, and are probably chasing criminals on them now.

7. Some fictional fails from Arrested Development

Netflix realised the comedy value of a good Segway crash, and wrote the slapstic antic into their hit TV show. It’s sure to raise a laugh. Here’s character GOB trying to ride on in a construction site:

New Music: Efya – One Of Your Own