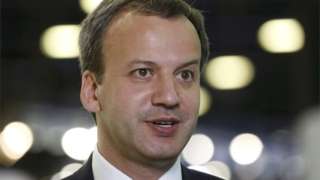 Brexit has weakened Europe and created uncertainties about its future, Russia's deputy prime minister has said.

Arkady Dvorkovich explained to BBC Newsnight: "For Russia it's important that Europe is strong. We need strong partners to go forward, and the British decision to leave Europe made Europe a little bit weaker at this point".

Mr Dvorkovich, who oversees economic policy for his government, argues that "the whole process [of Brexit]… creates uncertainties".

So what about the argument, oft repeated by Remainers during the referendum campaign, that President Vladimir Putin was rooting for Brexit because he wanted to undermine European unity and see the British, as a consistent voice in favour of sanctions on Russia over its policy in Ukraine, removed from the counsels of the EU?

Echoing his president, the Russian deputy prime minister argued that the UK's eventual withdrawal would not make a big difference to the European Union's internal debates over sanctions.

Mr Dvorkovich says that the economic platform against his country, which he characterised as "counter-productive, it brings losses to all parties", was the result, even in Europe, "mostly [of] the influence of the United States".

He was speaking to the BBC at the European House-Ambrosetti Forum economic conference, at Villa d'Este in Italy.

The EU is due to review its sanctions against Russia in mid-September but while those seeking to lift them had been sounding a note of cautious optimism, recent tensions over Ukraine have led most people to assume they will not be lifted.

Analysts in Brussels believe recent statements by German Chancellor Angela Merkel in favour of continued measures against the Kremlin have tipped the balance in favour of renewal.

As for the effect of these measures against Russia, analysts have suggested the country's economy shrank by 3.7% in 2015.

Mr Dvorkovich accepted that figure but argued: "Out of 3.7% contraction, 0.5% is related to sanctions and the rest is related to oil prices."

Since much of Russia's financial planning was based on an oil price of over $100 per barrel, its fall to around $40 at present has created big problems for the country's public finances.

While questioning the scale of the impact caused by sanctions, the Russian government is campaigning to have them lifted, with Mr Dvorkovich using the argument that they have harmed economic growth globally and consequently damaged the Western countries imposing them as well as Russia.

Might a reset of relations between the UK and Russia help in this regard?

There has been speculation that Britain might attempt to increase trade with Russia following Theresa May's taking office, and indeed suggestions from the Foreign Office that this moment might provide an opportunity for change.

"Let's see how it goes", Mr Dvorkovich told the BBC. "We are open, we are ready at any point in time".

Privately, Russian officials do not see much prospect of any significant short-term change.

But they do believe that the UK's strong economic interest (via BP) in the Russian oil sector might over time lead to increased co-operation and investment – something currently circumscribed by the EU's sanctions.

A40 crash: Mother and three young children killed in Oxfordshire

Top Nollywood actress opens up on her life as a politician

Gospel Singer Tope Alabi Denies Audio Confession: “I Am Not A Mermaid Spirit”

Fresh Revelations: General Ihejirika, Others To Be Picked Up