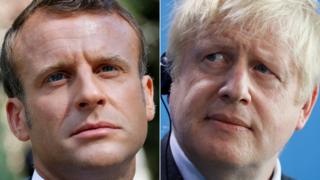 Boris Johnson is to meet Emmanuel Macron later, hours after the French president insisted reopening negotiations is "not an option".

Mr Macron said: "We have to help the British deal with this internal democratic crisis but we mustn't be hostage to it nor export it."

On Wednesday, German Chancellor Angela Merkel said the onus was on the UK to find a workable plan.

Mr Johnson said a deal could be achieved with "sufficient patience".

The UK prime minister has said the backstop – which aims to prevent a hard border on the island of Ireland after Brexit – must be ditched if a no-deal exit from the EU is to be avoided.

If implemented, the backstop would see Northern Ireland staying aligned to some rules of the EU single market, should the UK and the EU not agree a trade deal after Brexit.

It would also see the UK stay in a single customs territory with the EU, and align with current and future EU rules on competition and state aid.

These arrangements would apply until both the EU and UK agreed they were no longer necessary. Brexit supporters fear this could leave the UK tied to the EU indefinitely.

The EU has repeatedly said the withdrawal deal negotiated by former PM Theresa May, which includes the backstop, cannot be renegotiated.

However, it has previously said it would be willing to "improve" the political declaration – the document that sets out the UK's future relationship with the EU.

Mrs Merkel has argued that the withdrawal agreement does not need to be reopened if a practical solution to the backstop can be found.

At a news conference in Berlin with Mr Johnson on Wednesday, she indicated that a solution to the backstop – a key Brexit sticking point – might be achievable within 30 days.

Mr Johnson responded that the German chancellor had set "a very blistering timetable of 30 days" adding "I am more than happy with that."

"I think that if we approach this with sufficient patience and optimism we can get this done and it is in the final furlong generally when the horses change places and the winning deal appears," he added.

Later, Mr Macron said "Renegotiation of the terms currently proposed by the British is not an option that exists, and that has always been made clear by [EU] President Tusk."

Former Brexit Secretary David Davis said Boris Johnson's meeting with Angela Merkel had gone better than expected, adding "I certainly expected him to come away with a flea in his ear."

Mr Davis, who resigned over Mrs May's deal, said he thought it was "50/50" whether Britain would leave with a deal but if the EU wanted to get something done in 30 days they should look closely at the "very, very detailed proposals" for the UK-Irish border they had previously dismissed as "magical thinking".

Has Angela Merkel changed her tune?

There will probably be a frosty reception in Paris today. The mood music was a lot brighter in Berlin yesterday.

But the question is: has Angela Merkel changed her tune?

Behind the scenes Downing Street is pretty downbeat.

On the surface their meeting was very convivial, apparently they had a lovely dinner.

She said perhaps we can find a solution in 30 days but, the question is what is she going to do.

It seems that what Mrs Merkel was suggesting was talks about the political declaration, the legally non-binding document about the future relationship between the UK and EU, as opposed to the withdrawal agreement.

She was saying to the UK "come up with solutions" but she was not committing herself to reopening that crucial document.

The French president also said a trade deal with the US would not make up for the "cost" of what he called a "hard Brexit".

President Trump's national security adviser, John Bolton, has previously said the US supported a no-deal Brexit, adding that Washington would propose an accelerated series of trade deals with the UK.

But Mr Macron said: "Can the cost for Britain of a hard Brexit – because Britain will be the main victim – be offset by the United States of America? No.

"And even if it were a strategic choice it would be at the cost of a historic vassalisation of Britain.

Mr Macron added that "the British are attached to being a great power" but after Brexit could become merely a "junior partner" of the US.

Your guide to Brexit jargon

Earlier on Wednesday, an official in Mr Macron's office said France now saw a no-deal Brexit as the most likely scenario.

The UK is due to leave the EU on 31 October, with no deal being the default option.

Mr Macron said he saw no reason to grant a further delay to Brexit unless there was a significant political change in the UK, such as an election or a new referendum.

French officials said if the UK requested an extension in order to hold a new election, the EU would probably grant it.

After meeting Mr Macron on Thursday, Mr Johnson will attend the G7 summit on Saturday alongside other leaders including US President Donald Trump.

Mr Corbyn has proposed that in order to prevent a no-deal exit, opposition MPs should help him defeat the government in a no-confidence motion and install him as a caretaker PM.

If he wins the vote, he plans to delay Brexit, call a snap election and campaign for another referendum.

However the Liberal Democrats, and some potential Tory allies opposed to a no-deal exit, have indicated they will not back a plan that leads to Mr Corbyn in No 10.

The prime minister has said he wants to leave the EU with a deal, but that the UK would be ready for a no-deal Brexit.

The Cabinet Office has announced it will stop using non-disclosure agreements for organisations working with the government on Brexit unless strictly necessary. For three years such groups have had to sign legally binding contracts agreeing to maintain confidentiality.

#OMG! #KanyeWest Jumps Into A Lake While Performing [PHOTOS]

The Likely Cure For The Deadly Ebola Virus, EXPOSED

For Real! Madonna defends the illuminati...

9 important benefits of sex for both men and women

Beverly Osu in love with another woman’s man?