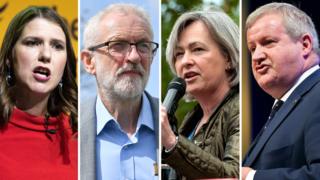 UK opposition parties have agreed not to back Boris Johnson's demand for a general election before the EU summit in mid-October.

Labour, the Lib Dems, the SNP and Plaid Cymru say they will vote against the government or abstain in Monday's vote on whether to hold a snap poll.

But the PM said the parties were making an "extraordinary political mistake".

Meanwhile, a bill designed to prevent a no-deal Brexit has been approved by the House of Lords and will pass into law.

It will force the prime minister to ask the EU for the Brexit deadline to be extended beyond 31 October if no deal is agreed by the UK and Brussels by 19 October.

Mr Johnson wants an election to take place on 15 October, ahead of that date and the EU summit on 17 and 18 October.

He argues that a snap poll will allow the government to "get on" with delivering Brexit by the end of October.

But opposition MPs – who, along with Conservative rebels, have already defeated one attempt by the government to bring in an early election – say Mr Johnson is trying to push through a no-deal exit.

During the past week the prime minister has suffered several defeats over Brexit in Parliament, expelled 21 of his own MPs for rebelling and seen his younger brother, Jo Johnson, resign from government.

"They discussed advancing efforts to prevent a damaging no-deal Brexit and hold a general election once that is secured."

SNP Westminster leader Ian Blackford said he was "desperate for an election", but it could not happen until an extension to Article 50 – the process by which the UK is leaving the EU – had been secured.

"It's not just about our own party interests; it's about our collective national interests," he said.

"So we are prepared to work with others to make sure we get the timing right."

He said they wanted to make sure the UK did not "crash out" in a no-deal Brexit.

Liz Saville Roberts, Plaid Cymru's Westminster leader, said there was an "opportunity to bring down Boris" and "we should take that".

And a Lib Dem spokeswoman said the group was clear that "we are not going to let Boris Johnson cut and run".

"The Liberal Democrat position for a while now is that we won't vote for a general election until we have an extension agreed with the EU. I think the others are coming round to that," she said.

"As a group we will all vote against or abstain on Monday."

But Housing, Communities and Local Government Secretary Robert Jenrick said the public were "sick of watching politicians bicker" about Brexit and it was time for an election.

He said opposition parties should "stop being cowardly, put the matter to the public, and get resolution at last, so the country can move forward with confidence and optimism for the future".

Mr Johnson has promised the UK will leave the EU "do or die" on 31 October, with or without a deal.

But he said on Friday that he would go to Brussels on 17 October and reach a deal.

He added that resigning as prime minister if he did not get one by then was "not a hypothesis" he would be willing to contemplate.

He also said he was "perplexed" by the decision of opposition parties to "run away" from an election.

"All I see is Corbyn and the SNP clubbing together to try and lock us into the EU when it's time to get this thing done," he said.

"It's the most sensational paradox – never in history has the opposition party been given the chance for election and has turned it down."

Unbelievable! More Nigerian pilgrims dupe each other in Saudi Arabia

VIDEO: Orezi and Davido party hard in remix of ‘Shuperu’