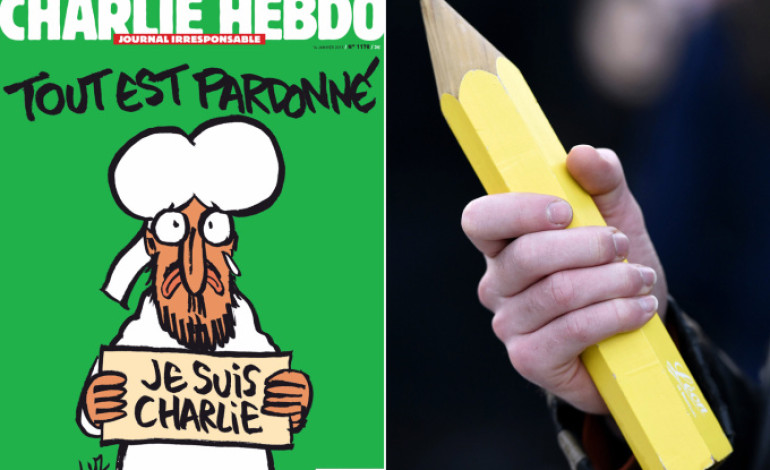 Here is the much-anticipated first edition of Charlie Hebdo since last week’s massacre — with a cover proclaiming, “All is forgiven.”

It’s not clear if the cartoon on the cover shows a generic Muslim or is an image of the Prophet Mohammed, such as those that sparked the killers’ wrath. The figure is weeping and poignantly
holds a sign that reads, “I am Charlie.”

The magazine is publishing 1 million copies for sale on Wednesday — exactly one week after the terrorist attack — but the cover was released on Monday.

“We will not give in, otherwise all this won’t have meant anything,” Richard Malka, the paper’s lawyer, told France Info radio.

Meanwhile, the White House admitted Monday it should have sent a senior official to Sunday’s massive rally against terrorism in Paris, as President Obama came under fire for failing to travel to France.

“I think it’s fair to say we should have sent someone with a higher profile,” White House Press Secretary Josh Earnest acknowledged.

The event drew dozens of heads of state walking arm-in-arm, including the leaders of the European Union, Israel and the Palestinian Authority. But Washington was represented only by the US ambassador to France, Jane Hartley.

‘We will not give in, otherwise all this won’t have meant anything. ’

Earnest said Obama would have liked to have gone himself, but suggested that the security requirements and short planning time had prevented it.

Attorney General Eric Holder, who was in Paris, also skipped the rally. Secretary of State John Kerry was traveling in India and Pakistan.

Criticism of Obama’s no-show came as 10,000 French troops flooded the nation’s streets to protect Jewish schools, transportation hubs and other targets — and to hunt for up to six other suspects wanted in the Charlie Hebdo siege and two others.

Among the terrorists who authorities think may still be at large is a man who was spotted driving a Mini Cooper registered to Hayat Boumeddiene, the widow of Amedy Coulibaly, the jihadist who
killed four at a kosher market Friday and murdered a young policewoman the day before. Boumeddiene fled to Turkey and then slipped into Syria before the attacks, authorities said.

French police also revealed that Coulibaly was cut down in a hail of 40 bullets as he ran from the market with guns blazing at exhausted cops, who had been on the hunt for 50 hours without sleep.

“One of the things that most motivated us was that video of the odious assassination of our colleague Ahmed Merabet outside Charlie,” one of the officers told Le Parisien.

Additional reporting by Geoff Earle and Sophia Rosenbaum, with Wires

Millions of people took part in the demonstration.