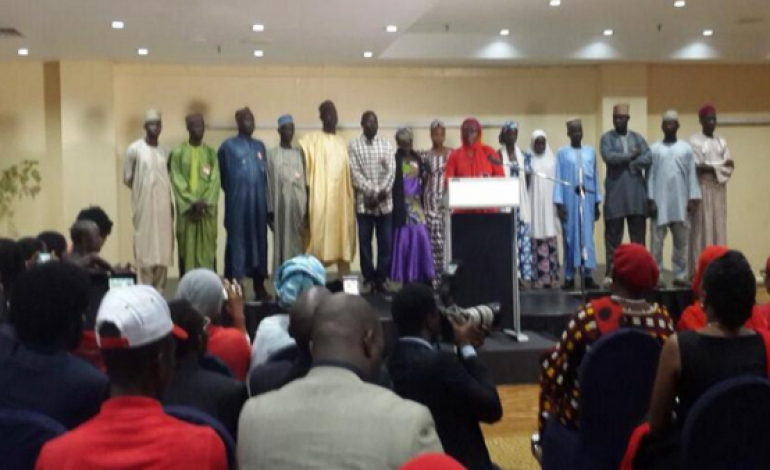 Press statement from representatives of parents of Chibok girls/survivors regarding the cancelled meeting between them and president Jonathan yesterday July 15th.
We the members of the Kibaku (Chibok) Community and representatives of the 12 fathers and 5 escaped girls who were hosted by Malala during her visit to Nigeria hereby speak on their behalf to offer to Nigerians the facts as they are and to put the records straight and correct the erroneous impression making rounds in the media on the botched meeting with the President:
1. The logistics and meeting between the twelve (12) fathers and five (5) girls and Malala was facilitated by the Abuja Chibok Community and the Citizens platform of BringBackOurGirls with our consent and on TRUST considering their sustained and focused advocacy to Bring Back our daughters.

2. These parents and escaped girls did not come to Abuja at the instance of government or its representatives for a meeting with Mr. President but on the full understanding that they were coming to meet with Malala; an advocate of girl child education and most importantly one who has suffered a similar fate as their daughters’.

3. That in the course of the interactions with Malala, NEITHER the parents nor the escaped girls asked for a meeting with the President or any government functionary, rather the narrative back home was to persistently ask why the President has not visited them in Chibok since the abduction.

4. It is obvious that their numbers of 12 fathers and 5 girls is about 2% of the parents of the 219 abducted girls still with their abductors and the 57 girls that escaped. Therefore, these parents DECIDED on their own accord to review the announced visit, which they FIRST heard of like every other person during Malala speech in Hilton.

5. That consequent to their decision to revert to other family members in order to incorporate every stakeholder on the matter as well as avoid discord and suspicion on a change of plans from the original mission to Abuja, they reached out to the Malala team and through them to the Presidency; to request for a new date for an expanded and more representative meeting that has a legitimate mandate to meet with the President.

6. That their request is also in recognition of the huge opportunity of a meeting with the President for the first time and after over 90 days of the tragic abduction of their daughters, and therefore required better consultations, structure and formality as against an instant advocacy request.

7. That it is totally misleading, unjust and without foundation to hold the Citizens’ platform BringBackOurGirls responsible for the decision made by the 12 parents and our community. We therefore take full responsibility for our decision and welcome the formal invitation by the Presidency as a follow up to Malala’s visit which we received this morning.

In the last 24hours, the #BringBackOurGirls Abuja family has observed with consternation the escalation of the pattern of the campaign of calumny by Government officials on our Citizens movement advocating for the rescue of the 219 school girls of abducted from Chibok Girls Secondary School, 93 days ago. The latest in this trend is emanating from the visit facilitated for the 11 parents and five escaped girls who were visiting Abuja to interact with girl-child education advocate Malala Yousafzai.

During the public speech by Ms. Malala she declared that she had received a promise by President Jonathan to meet with the 11 parents and five girls. The movement was not aware and neither was it part of the discussion of the said visit to our President.

However, at the BBOG daily sit out, our movement was informed by the Chairman, Abuja Chibok community of the outcome of a meeting held with officials of the Presidency in Malala’s suite (immediately after her speech). He conveyed that they were informed at that meeting of a the scheduling of the visit to the President for the eleven parents and five girls at 4.00pm on Tuesday 15th July 2014.

Although some members of the movement were surprised at the sudden invitation to meet with the President, our leadership concluded that session by emphasizing that it was the absolute right of the Chibok community to decide on the matter. It is instructive to note that majority of those at the Unity Fountain on that day were visiting from the Chibok community and were mostly the ones who vehemently expressed dismay at the information from the Chairman. He then clarified on the manner the invitation was conveyed to him and the parents at that meeting and reassured his community that he would schedule an emergency meeting to discuss the matter further.

On Tuesday 15th July 2014, the leadership of our movement were invited to a meeting by the Chibok Chairman and the leadership of their development association with the eleven parents in attendance. At the meeting they conveyed to us their unanimous decision to request for a rescheduling of the Malala facilitated meeting with the President. They further informed us of their intention to reach out to the Malala team and officials of the Presidency to request for an expanded meeting within a sufficient time frame for necessary planning with the rest of their community in Chibok.

As a movement, we wish to seize this opportunity to express our gratitude to Malala who helped amplify the advocacy for concerted efforts towards the rescue of our girls.

Meanwhile, it is pertinent to firmly state that since the inception of our movement in April 2014, we have remained steadfast and adopted all means and channels of civil engagement in the advocacy of our singular issue, which is #BringBackOurGirls NOW and ALIVE

Ooh! See The SUV’s That Ghanaian Footballers Were Given For Placing 2nd in AFCON

Rihanna is in Love With Designer Zac Posen

Autumnal Equinox: What it means and how you can make the most of it