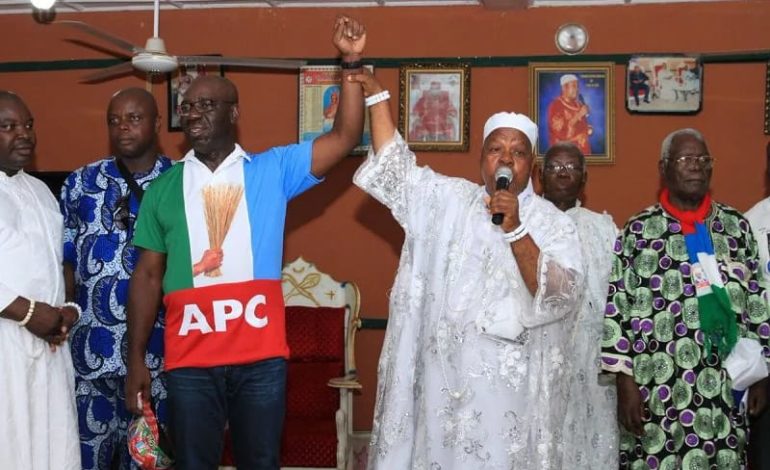 HRH Igbinidu holding up APC candidate, Godwin Obaseki’s hand ahead of the Edo election in September

The All Progressives Congress (APC) has openly celebrated an Edo monarch who threatened electorates in the upcoming Edo election with ancestral curse.

The Iyase of Udo Kingdom, HRH, Patrick Igbinidu threatened, on Tuesday, August 30, when the APC ward campaign train made a stop at Udo, Ovia South West local government area of the state, that any of his subjects who voted against the governorship candidate of the All Progressives Congress (APC) in the September 10 Edo election, Godwin Obaseki, would promptly incur the wrath of the ancestors of the land on such a person. 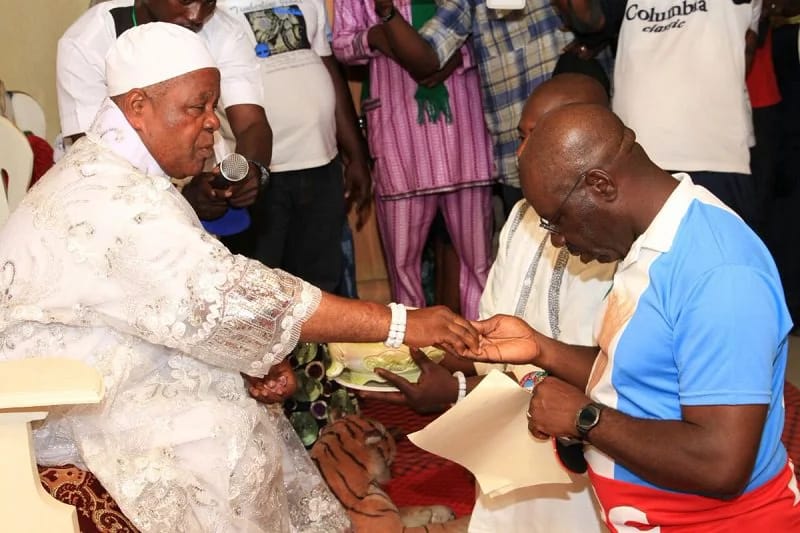 While stating that the plan to develop the state must be realised, the monarch said, “We have sent him on an errand and we are praying to God to grant him success as the governor and we know whatever he has promised to do, he will do.

“I’m very happy that he is ready to take over governance from Oshiomhole, we know that whatever Oshiomhole has started Obaseki will finish and also improve on them.”
READ ALSO: Fast all in one — UC Browser
The APC on Thursday, September 1, posted the monarch’s threat in one of its early morning tweets on its official Twitter handle.

“My Ancestors will fight anyone who votes against Obaseki” – HRH Patrick E. Igbinidu (JP), The Iyase of Udo. pic.twitter.com/stp1uelyTv

The monarch’s words and APC’s action on Thursday are clear negations of INEC rules as stated in the ‘offences’ section on its official website that for no reason should anyone force an electorate to vote for a particular candidate against his or her will. The punishment is spelt out.

Meanwhile, ahead of the September 10 governorship election billed for Edo state, the Nigerian Police Force (NPF) has concluded plans to deploy helicopters and 200 vehicles to monitor the election.

According to the acting Inspector- General of Police (IGP), Ibrahim Idris, the helicopters will provide aerial surveillance during the election, while the vehicles will logistics for Police Mobile Force (PMF) personnel, as well as marine police.

How Much Will it Be Invested in Nigeria? “U.S Will Invest $33 Billion in Africa” – Obama

6 Ways You Are Sabotaging Your Beautiful Love Story