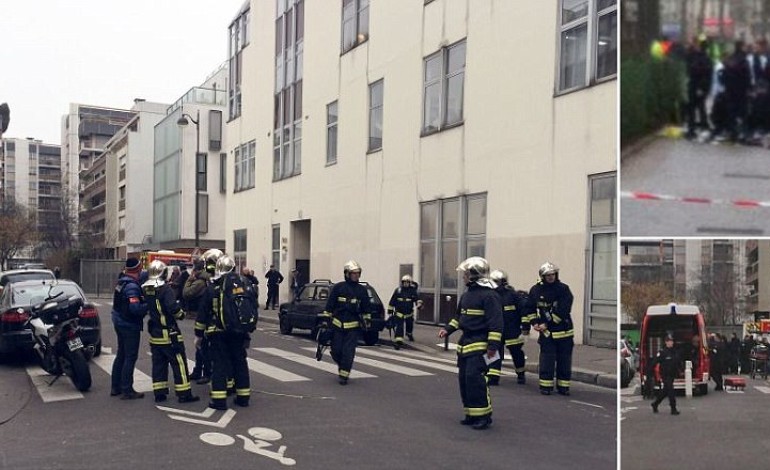 Up to 11 people were killed and five left critically wounded today when armed gunmen carried out a ‘massacre’ at the offices of a notoriously anti-Islamic satirical magazine in Paris.

By midday, there were reports of up to 11 people dead and 10 wounded, five critically, including journalists, administrative staff, and police officers who attended the scene.

Pierre de Cossette, a broadcast journalist with Europe1 News, said: ‘Several men in black cagoules were heard to shout ‘the Prophet has been avenged’.’ Emergency: Police officers and firefighters gather in front of the offices of the French satirical newspaper Charlie Hebdo in Paris today after armed gunmen stormed the offices Officers were involved in a gunfight with the men, who escaped in a hijacked car and sped away from the 15th arrondissement office, towards east Paris.

As well as the AK47 assault rifles, there were also reports of a rocket-propelled grenade being used.

When shots rang out, it is thought that three policemen on bicycles were the first to respond.

‘There was a loud gunfire and at least one explosion,’ said an eye witness. ‘When police arrived there was a mass shoot-out. The men got away by car, stealing a car.’

A police official, Luc Poignant, said he was aware of one journalist dead and several injured, including three police officers.

President Hollande was on the scene today, saying the worst terrorist atrocity in recent years this century was an unjustifiable attack on press freedom.

Florence Pouvil, a salesperson at Lunas France on Rue Nicolas Appert, opposite Charlie Hebdo offices, told MailOnline: ‘I saw two people with big guns, like Kalashnekovs outside our office and then we heard firing. We were very confused.’

‘There were two guys who came out of the building and shot everywhere. We hid on the floor, we were terrified.’ A police official, Luc Poignant, said he was aware of one journalist dead and several injured, including three police officers ‘They came from the building opposite with big guns. It has a bunch of different companies inside. Some of our co-workers work there so we were frightened for them.

‘They weren’t just firing inside the Charlie Hebdo offices. They were firing in the street too.

‘We feared for our lives so we hid under our desks so they wouldn’t see us. Both men were dressed in black from head to toe and their faces were covered so I didn’t see them.

‘They were wearing military clothes, it wasn’t common clothing, like they were soldiers.’

A source close to the investigation said two men ‘armed with a Kalashnikov and a rocket-launcher’ stormed the building in central Paris and ‘fire was exchanged with security forces.’

There were reports that the gunmen were looking for people by name.

After the shooting, hundreds of comments were posted on the Charlie Hebdo Twitter page, with one user, David Rault, writing: ‘A sad day for freedom of expression.’

The offices of the same magazine were burnt down in a petrol attack in 2015 after running a magazine cover of the Prophet Mohammed as a cartoon character. Officers were involved in a gunfight with the men, who escaped in a hijacked car and sped away from the 15th arrondissement office, towards east Paris

At the time, the editor-in-chief of the magazine, Stephane Charbonnier, said Islam could not be excluded from freedom of the press.

He said: ‘If we can poke fun at everything in France, if we can talk about anything in France apart from Islam or the consequences of Islamism, that is annoying.’

Mr Charbonnier, also known as Charb, said he did not see the attack on the magazine as the work of French Muslims, but of what he called ‘idiot extremists’.

The cover showed Mohammad saying: ‘100 lashes if you are not dying of laughter’.

Inside, there was an editorial, attributed to the Prophet Muhammad, and more cartoons – one showing the Prophet with a clown’s red nose.

Depiction of the Prophet is strictly prohibited in Islam, but the magazine denied it was trying to be provocative.

A firebomb attack gutted the headquarters of Charlie Hebdo in November 2011 after it put an image of the Prophet Mohammad on its cover.