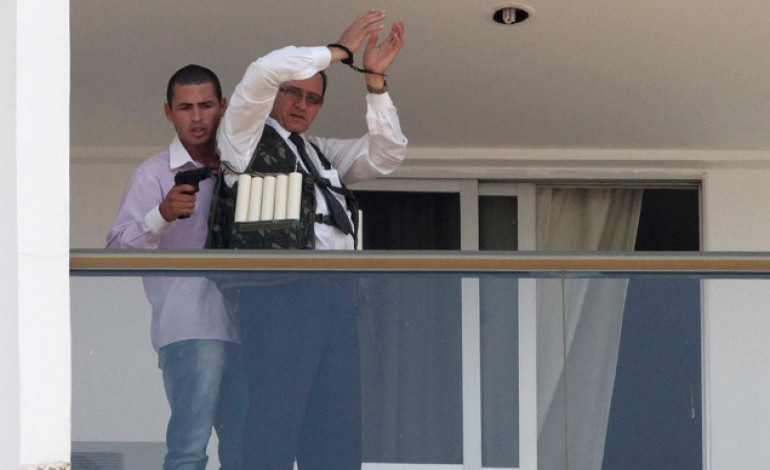 Isht is real in Sao Paolo!

A Hotel In Sao Paolo

A Brazilian hotel has been evacuated in the capital of Brasilia after a man took an employee hostage.

Live television on Monday showed the assailant with what appeared to be a gun parading the hostage out onto the balcony of a room on the 13th floor of the Saint Peter Hotel.

Ben Tavener, a freelance journalist in Brazil, posted a tweet with an image of the two men.

The hostage was handcuffed and wearing what appeared to be an explosive vest. Authorities didn’t confirm whether there were actually explosives in the garment.

Firefighters and police have cordoned off the area and about 300 guests and other employees left the hotel — some reportedly told to leave by the same man, who told them he planned to carry out a “terrorist act.”

“We are working up there. There are three negotiators. They’re trying to find out what his demands are; what it is he wants,” a police officer told Reuters.

Local media reported the man holds a grudge against the Brazilian government and has called for the “downfall” of Brazilian President Dilma Rousseff.

Police haven’t identified the man or said if he has any demands.

Where is Liam Neeson when you really need him?

Powerball fever sweeps California as the jackpot climbs to $800 million