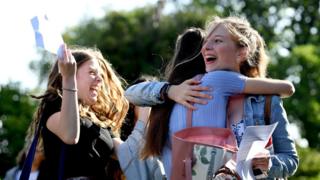 There has been a slight increase in the GCSE pass rate and the percentage of top grades this year, despite concerns about the difficulty of exams.

The pass rate edged up to 67.3% in England, Wales and Northern Ireland – up 0.4 percentage points on last year.

The rise comes as head teachers in England warned toughened GCSEs were demoralising some candidates.

More than 700,000 teenagers are receiving their GCSE results in England, Wales and Northern Ireland, after a string of reforms to the exams system.

Exam boards and exam regulators make efforts to hold standards steady so as not to disadvantage pupil sitting new exams.

A new numerical grading system and tougher exams have been introduced in England, while elsewhere many GCSEs are still graded A* to G.

In England, 837 candidates got a clean sweep of 9s – the very top grade – in all their subjects.

However, head teachers have warned that some lower-attaining pupils have been so disillusioned they refused to sit the exams or even their mocks.

"This has never happened before," said one deputy head, responding to an Association of School and College Leaders (ASCL) survey.

Why pass rates never change much

England's exams regulator Ofqual and the exams board insist they are keeping standards the same over time through a system of comparable outcomes.

Exam boards do this by making adjustments to grade boundaries during the marking process, having married the difficulty of papers with the predicted ability of the group of students sitting the exams.

This means the percentages achieving different grades nationally never changes very much from year to year.

But where exams are perceived harder, the grade boundaries may be lowered. For example, on Pearson/Edexcel's higher maths paper, the pass mark – (a 4 in England) – was just 22%.

Schools Minister Nick Gibb said the comparable outcomes system ensured that candidates were not treated unfairly by the raising of standards.

But Geoff Barton, ASCL general secretary, said while the increased rigour may have been in the interest of the more able students, it had come at the expense of the more vulnerable ones.

He called for the exams to be tweaked to make them "less of an ordeal" and said a more "humane way" to assess the abilities of young people was required.

The National Education Union warned of the impact these tougher exams were having on student mental health and wellbeing, adding that many young people were left feeling "disillusioned, disengaged and stressed".

Last week, a leaked document revealed the low number of marks required to achieve a grade A in some A-level subjects.

Teachers and students had already complained about the difficulty of some maths papers in particular.

There were an estimated 5.2 million GCSE entries this summer – up 50,000 on the previous year.

Are your GCSE results not what you expected? If you didn't get what you were hoping for, get in touch and put your questions on what to do next to our experts. A selection will be answered in our coverage. Email haveyoursay@bbc.co.uk.

Or use the form below

5 Dirty Things Abuja Big Babes Do To Get Money

Man Robs GTBank with Invincible Ring; But the RING Fails him

WOW! Lil Wayne's daughter gets a Ferrari and BMW for her 16th birthday

Goodluck Jonathan wins again as Buhari adopts one of his policies