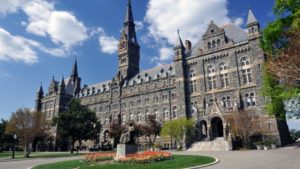 *Georgetown University, the oldest Catholic institution of higher learning in the United States, will take a series of steps to atone for the role that slavery played in its early survival, including giving financial aid to the descendants of the slaves Georgetown sold away from their families to pay off debts. Georgetown was founded by Jesuit […]

The post Georgetown University Trying to Atone for the Role Slavery Played in its Early Survival appeared first on EURweb.

Puff Daddy Announces Retirement from Music to Focus on Acting