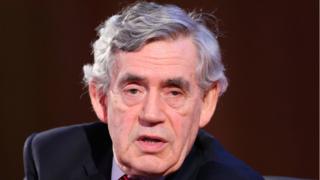 Gordon Brown will call on Labour to automatically expel members for anti-Semitism if evidence is "irrefutable".

In a speech in London, Labour's former prime minister will also call for an independent appeals process to keep it separate from "Labour's hierarchy".

He will suggest appointing a minister to tackle the issue.

Mr Brown will say: "To fail to act against the abuses we have witnessed runs counter to the very principles of the Labour Party we joined."

His call comes after more accusations of anti-Semitism against senior members of Labour.

PoliticsHome reported that Jules Rutherford, who is due to start as Labour's head of membership on Monday, shared a video on Twitter claiming anti-Semitism allegations within the the party were "smears against the party leader" Jeremy Corbyn.

Mr Brown will make his remarks while delivering the Isaiah Berlin Lecture in Hampstead on Sunday, calling for the changes to be made at Labour's party conference in September.

He will say the party cannot be "less demanding and less immediate" in its actions, especially when it already automatically expels people for other reasons – such as admitting to voting for other parties.

He is expected to say: "To the Jewish community, we promised 'never again'. We promised that the crimes of hatred, discrimination and persecution would never recur. We promised we would offer support and protection.

"But at a time when attacks on Jewish schools have risen 100%, attacks on or near Jewish synagogues 400% and attacks are carried out on social media thousands of times over, we have not lived up to that promise."

'Moral soul of a party'

Mr Brown said the party owed the Jewish community "an unqualified apology", but it would only be "a starting point in rebuilding trust", calling for a broad strategy, including better education in schools and stronger laws against racism in all its forms.

"We cannot go on ignoring the consequences of the upsurge in hate and hate speech, all too often in the form of sinister, anonymous and untraceable internet trolling," he will add.

"Opposing anti-Semitism and every manifestation of racism goes to the heart of who we are and what we stand for as Labour. It's about the moral soul of a party, whose most basic goal is a commitment to equality for all – not just for some who suffer oppression – but everyone."

The internal Labour row over anti-Semitism has being going on for nearly three years.

Here is a guide to what has been going on.

'Before you compare yourself to Don Jazzy...' - Teebillz writes

The Sons Of Futa Jalon (Part 1) By Femi Fani-Kayode