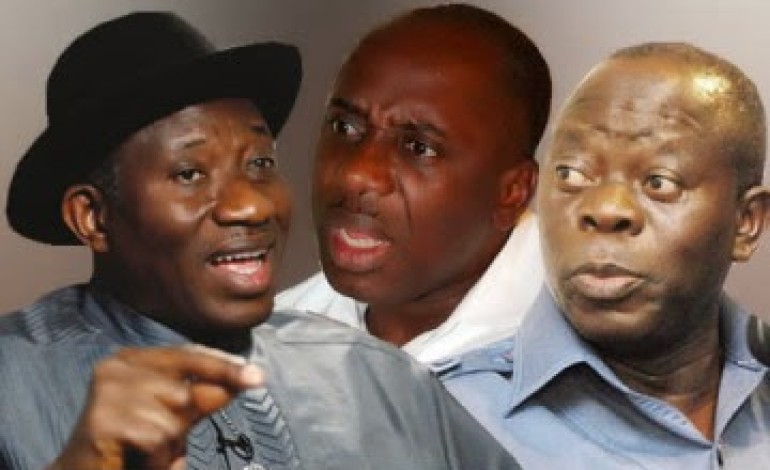 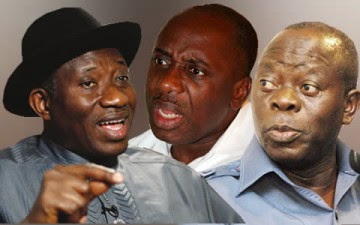 Governor Adams Oshiomhole of Edo State and his Rivers State counterpart, Rotimi Amaechi, have said they are not losing sleep over alleged plots by President Goodluck Jonathan to push for their impeachment.

The duo vowed that the Presidency and the Peoples Democratic Party could not impeach them like they did to the former governor of Adamawa State, Alhaji Murtala Nyako.

APC National Chairman, John Odigie-Oyegun, at a press conference on Wednesday alleged that Jonathan and the PDP were out to remove the governors of Edo, Nasarawa, Osun, Borno and Rivers states.

But Oshiomhole warned Jonathan not to try such in his state as he was popularly elected by the overwhelming majority of Edo people. He said:

“The thought of impeachment does not cross our hearts. First, what would be the rationale? Secondly, the APC has majority in the Assembly. Thirdly, the governor is on ground. Fourthly, he is performing. We are not losing sleep over that because we have capacity for decency when it comes to real issues of political engagement.”

He spoke through his Special Adviser on Media and Public Affairs, Mr. Kassim Afegbua, while accused the PDP of impunity, which he said was fast eroding democratic principles in the country.

He added, “If the PDP is now engaged in a gestapo manner with a gale of impeachment here and there, and with clear-cut abuses, it is the responsibility of the media to expose such dubiety and save our democracy from collapse.”

In Rivers State, Amaechi and his followers said they were aware of the threat of impeachment in order to force the governor back to the PDP, but added that such threat would not work.

Describing the threat to make him return to the PDP as a dull dream and a wild goose chase, the governor, who spoke through his Chief of Staff, Chief Tony Okocha, explained that the formal move by 25 members of the state House of Assembly to the APC on Wednesday had foreclosed any thought of his (Amaechi) removal as the state governor.

He said, “It is a wild goose chase because no threat of impeachment from the Presidency will make the governor cave in. Twenty-five PDP Assembly members have all defected formerly to the APC, all in solidarity with the governor.

“We are aware of such threats of impeachment, but it is not working. The coffin has been nailed and there is nothing they (Presidency) can do about it,” he added.

Amaechi, however, said he would not quit politics as a result of the threat to impeach him or force him to join the PDP, adding that his political future remains in the hands of God and the people of the state.

On the recent impeachment of Murtala Nyako as the governor of Adamawa State, Amaechi said though he was worried that his colleague was removed, the scenarios in Adamawa and Rivers states were different.

He said, “When the lawmakers were all in the PDP was even when we thought that impeachment would happen. Now, everybody in Rivers State has resolved that Governor Chibuike Amaechi will serve out his eight years.

“People are defecting enmasse to APC. So, they need to come and break our ranks here before they can achieve their plan. The threat to impeach Amaechi so that he will return to the PDP will not work; it is wishy-washy, it is a dull dream.”