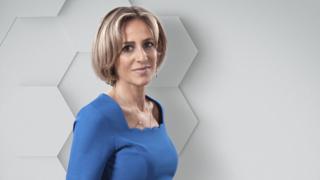 A prisoner has appeared in court accused of trying to contact BBC Newsnight presenter Emily Maitlis – a breach of his restraining order.

Edward Vines, 49, of HMP Ranby in Nottinghamshire, pleaded not guilty to breaching it by sending her a letter via her mother between 7 and 16 May this year.

The order had been imposed on him at Oxford Crown Court in 2008.

He represented himself at Nottingham Crown Court on Friday.

The charge alleges that Vines acted in breach of the restraining order without reasonable excuse, by writing a letter to Marion Maitlis to pass on to Emily Maitlis – which he was prohibited from doing.

He met and briefly became friends with the Newsnight presenter when they were both students at Cambridge University.

Judge Gregory Dickinson QC remanded the defendant into custody at the end of the hearing.

The trial is set to start on 3 February next year.

Checkout this N240,000 sneakers everyone is talking about (photos)