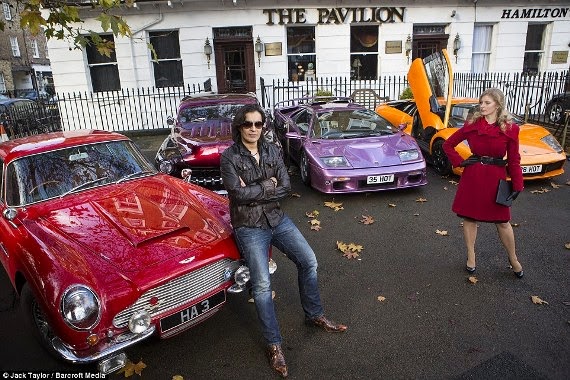 With £25m at his disposal, the loudest car in Britain as his ride and a fleet of leggy models on speed dial – Danny Lambo claims he is Britain’s self-styled ‘flashiest playboy’.
The boastful 37-year-old hotelier says he is part of a new generation of self-made millionaires ditching traditional English humbleness in favour of flaunting their wealth.
The brash Croydon-born entrepreneur claims he left school with no qualifications and says he was told by his headmaster that he would fail in life. 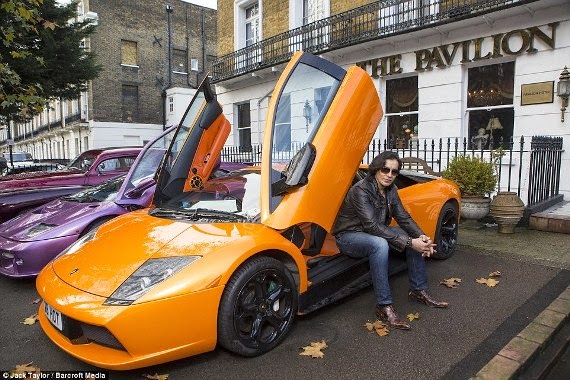 But years later he says he claims to be living a luxury lifestyle that sees him jetting around the world meeting Middle Eastern royalty, buying cars from rappers like 50 Cent and, of course, treating the ladies to the finer things in life.
‘Being a playboy is the opportunity to live out your childhood and adult fantasies and dreams,’ said the showy ladies’ man.
‘You have the opportunity to do what you want, when you want. If you’ve got the balls, nothing can stop you.’ 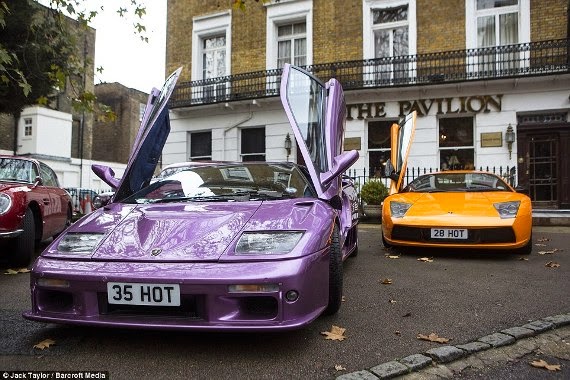 Danny, whose actual surname is Karne, claims he is known as ‘Lambo’ because of his passion for extra-loud and somewhat garish Lamborghinis.
These include a purple Diablo model, which he boastfully claims has the loudest exhaust in Britain, and has proved hell for his neighbours in west London.
The flashy businessman claims his cars are so loud that he uses a noticeboard and a megaphone to call out to the women that catch his eye while he’s behind the wheel.
But even after getting their phone numbers, the ostentatious Romeo says he sometimes just giving them to his friends. 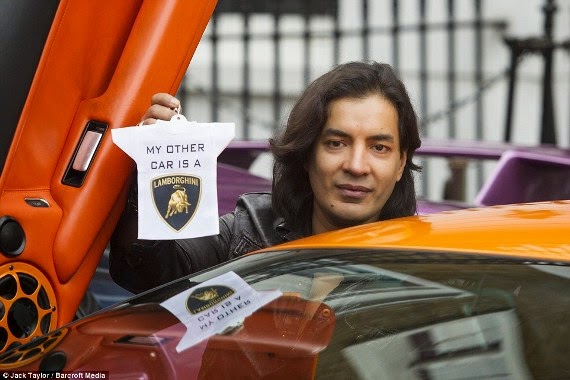 When he’s not managing his three hotels and property empire, he claims likes to romance several Russian models with swanky £10,000-plus drinks at his six-storey Mayfair townhouse, which once belonged to Tory Prime Minister Anthony Eden, or at his other property overlooking the Thames.
He thinks nothing of spending an extravagant £5,000 on meals at trendy west London restaurants like Chiltern Firehouse and Novikov before whisking them home to browse his antiques – which include a four-poster bed that he claims once belonged to Napoleon.
His other vices include judging beauty contests like Miss USSR UK and chatting up contestants at the Miss World finals.
The lucky ladies who become a permanent fixture in his ‘harem’ can find themselves whisked off to Barbados or the French Riviera at the drop of a hat to stay at one of his villas.
Sometimes he claims they allowed to simply spin the globe and choose a destination if he’s feeling extra generous.
But the only permanent lady in his life is his pet cat Molly. And he claims she got bought a staggering £1,500 diamond collar for Christmas.
Despite his ostentatious ways, Danny claims he is a good person with a kind-heart who is just enjoying life.
And despite his extravagant and flashy ways he says, he knows the value of money after growing up in a normal household.
‘I’m not going to hide my wealth, I don’t know why I should. I’ve worked hard for this. I wasn’t born with a silver shoe, so why not flash it?
‘I became a millionaire when I was 22 and I’m the type of person that if I have money I’ll spend it. 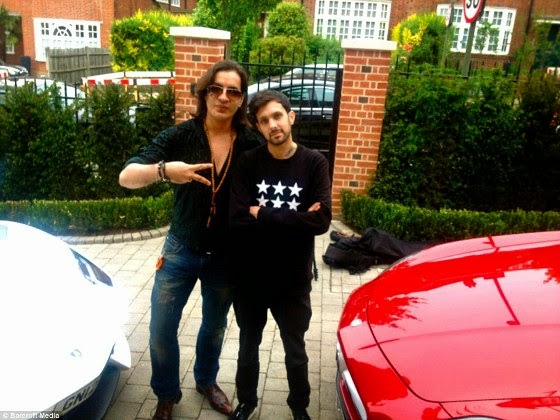 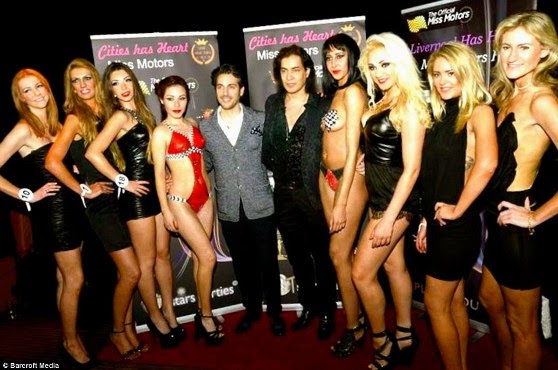 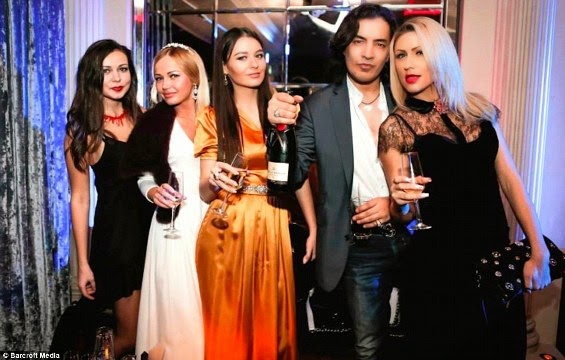 ‘I’m not going to take it to the grave with me.
‘When I’m dead and dusted I’ll leave what I have left to charities, friends and family, but while I’m still here I’m going to spend it.’
Danny, who owns a £100k Chopard watch, claims he is well-liked by the established wealth in London, despite appearing to flaunt his wealth.
He claims grew up in a normal household with one brother and two sisters in Croydon, south London.
Both his parents were teachers who encouraged him to get a full and rounded education – but Danny says he aspired to be something brighter and bolder.
‘We weren’t working class. Both my parents were teachers so we had a teacher salary, which wasn’t the best,’ said the father-of-one, whose two-year-old son lives with his ex in Moscow, Russia.
‘We had a reasonable house. It wasn’t anything grand but, you know, my father couldn’t afford to give me a Lamborghini like I could for my son.’
The self-confessed daydreamer left school aged 16 without any qualifications – thanks in part to a chance encounter with a Japanese music producer.
Danny and his friends were singing in a London bar when they were scouted and invited to tour the Far East, with the intention of later marketing them back to a Western audience. 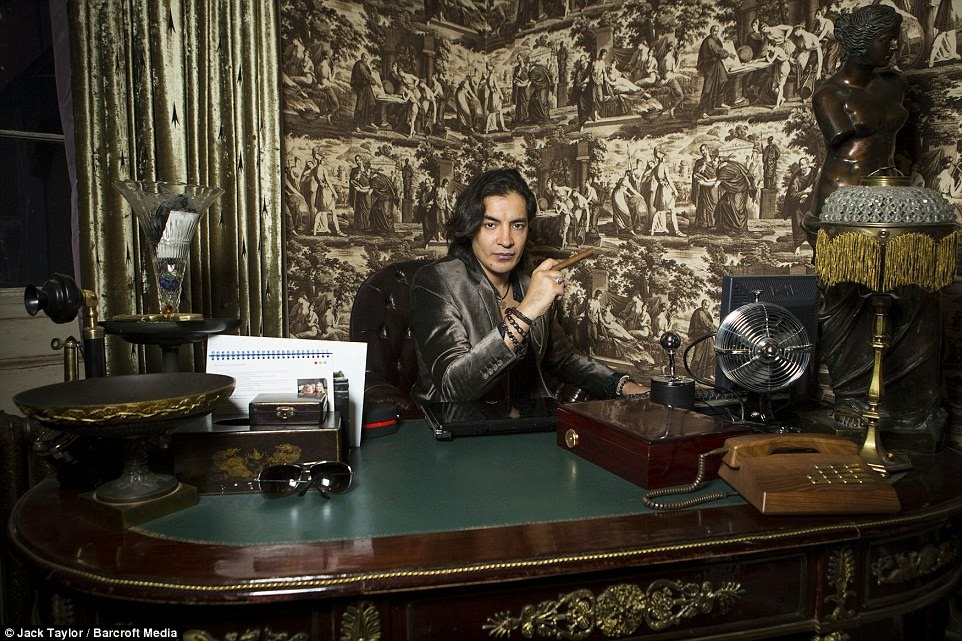 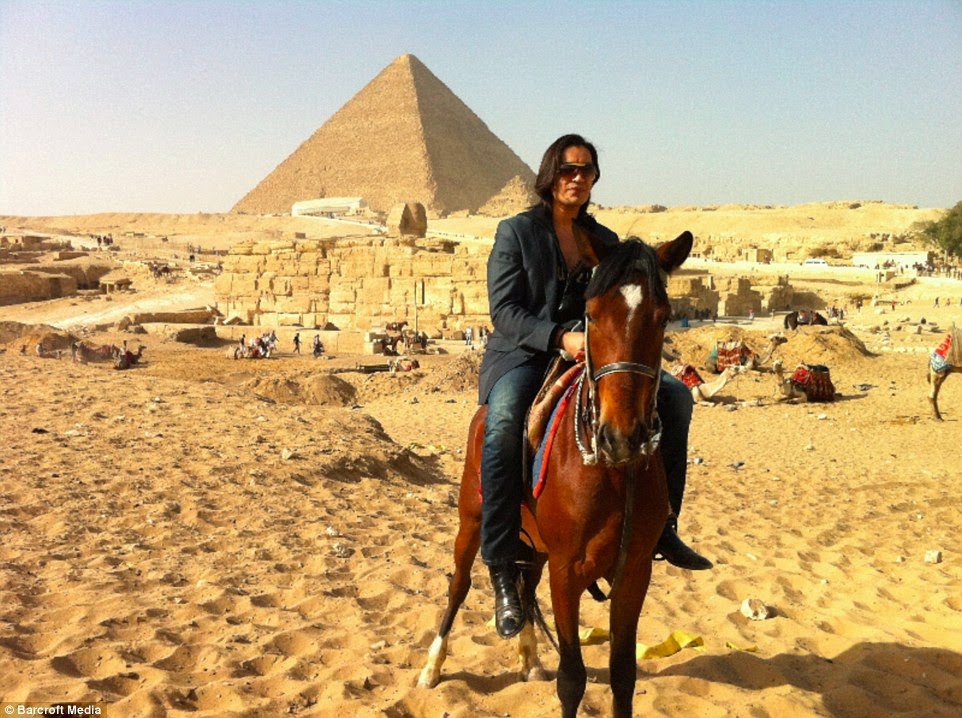 “We were offered a record deal and so I literally walked out of school before my final exams and headmaster said: ‘Hey, Danny where are you going?’.

‘I said, ‘I’m going to Japan to become a pop star’. He replied ‘you’re going to fail in life’.
‘I told him to get lost and we walked out and went to Japan.’
Over the next four years, Danny toured girls’ schools and other venues in Asia, Australia and New Zealand, living out of a suitcase and spending most of his time rehearsing and performing or living in hotels.
When the band finished, Danny was forced to turn to the one thing he did know after several years on the road.
‘The hotel kind of became my world outside of the music,’ said Danny, who was the lead singer in the group called Jealous.
‘For 21 hours of the day we’d just be hanging out in the hotels. It was all I knew. My best mate would be the concierge and I’d be dating the chambermaids.
‘So when I got out of the music industry when I was 21, having sent every penny I’d saved back home, the only thing I knew how to do was run a hotel.
Culled from  Daily Mail Uk
Top Post

Jokes About Paul Walker To Be Removed From Justin Bieber Roast