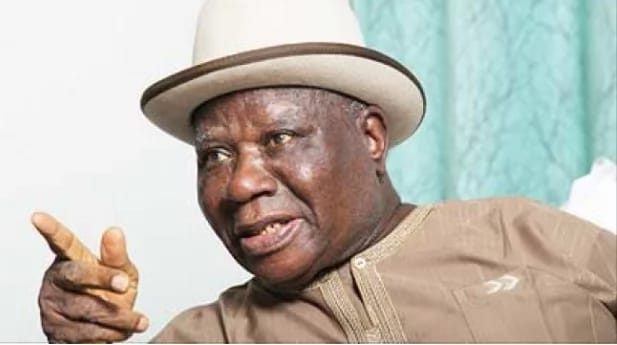 Negotiation between the federal government and militants in the Niger Delta region has suffered setback as Ogiame Ikenwoli who is the Olu of Warri has rejected the Chief Edwin Clark-led team.

Clark was appointed by the Niger Delta Avengers to head the negotiation team to dialogue with the federal government after the group called for a ceasefire.

He also rejected the monarchs’ meeting which had Dr. Ibe Ikachikwu who is the minister for petroleum in attendance.

In a statement issued by the palace administrator, Dr. Emmanuel Tetsola, Ikenwoli lashed out at those who claimed to have represented the Itsekiri nation at the two meetings as no one had been authorised to represent him.

“It has come to the knowledge of the Palace of the Olu of Warri that some Itsekiri sons and daughters who are attending the above mentioned meetings are claiming to be representing either the Olu of Warri or the Itsekiri people of Delta State.

“The Palace wishes to state categorically that while individuals are entitled to freedom of speech and association, as guaranteed by the Nigerian constitution, it has not authorised or mandated any person to represent either the Olu of Warri or the Itsekiri people at these meetings.”

Prof. Lucky Akaruese was reported to have represented the Itsekiri ethnic group at the meetings and this was frowned at by the monarch.

“Consequently, those persons who attended these meetings cannot arrogate to themselves the authority to speak or represent either the Olu of Warri or the Itsekiri people,”

Governor Ifeanyi Okowa of Delta state had attended the meeting while the governor of Bayelsa was also represented in a bid to find a lasting solution to the problem of herdsmen attacks.

Meanwhile, the federal government is waiting for reports from the National Security Adviser Major General Mohammed Monguno (retd.); service chiefs and other top government officials before commencing dialogue with militants.

The special adviser to the president on media and publicity, Femi Adesina, confirmed this on Tuesday, August 30.

He said: “The President has charged some people with engaging the various militant groups, and now that they are waiving the white flag, there will definitely be formal talks. “But before that, the NSA, service chiefs and all those involved need to bring their reports, they will be assessed before dialogue will kick-off”.

Muna’s Death: We Can’t Help Anyone Who Is Not On The Plan – AGN

Judge wins $291 million in lottery jackpot, while his brother wins a whooping $7