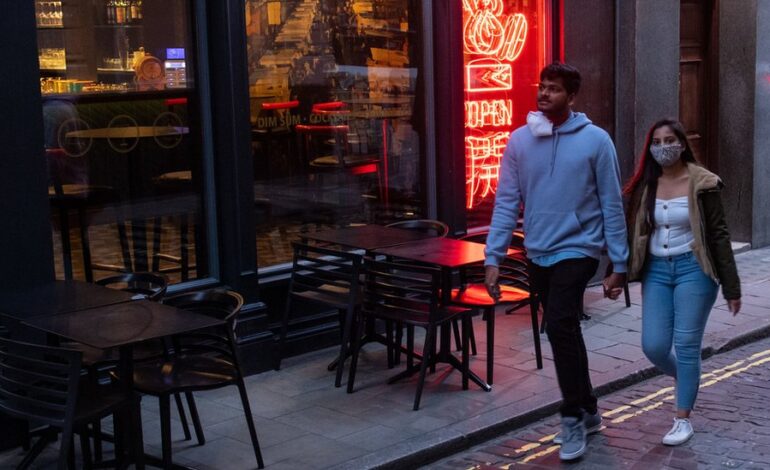 The chancellor has unveiled increased support for jobs and workers hit by Covid restrictions after growing clamour from firms in tier two areas.

He told the Commons that even businesses not forced to shut were facing "profound economic uncertainty".

Under the revised scheme, employers will pay less and staff can work fewer hours before they qualify.

At the same time, the taxpayer subsidy has been doubled.

Businesses in tier two areas, particularly in the hospitality sector, had complained that they would be better off if they were under tier three restrictions.

One prominent chef, Yotam Ottolenghi, had said conditions for his restaurants were "terrible" since tier two restrictions were applied to London, adding: "We are on our knees now."

In response to such arguments, Mr Sunak has now changed the terms of the JSS.

Referring to those businesses, he said: "It is clear that they require further economic support."

Instead of a minimum requirement of paying 55% of wages for a third of hours, as announced last month at the launch of the Winter Economic Plan, employers will have to pay for a minimum of 20% of usual hours worked, and 5% of hours not worked.

The government will now fund 62% of the wages for hours not worked . This more than doubles the maximum payment to £1,541.75. In the most generous case, the taxpayer will now go from funding 22% of wages to just under half.

The scheme will, as before, be open to all small businesses and larger businesses that can show an impact on revenues.

It is aimed at addressing the gap in support for businesses in tier two restrictions, such as London and Birmingham, but is not explicitly tied to that status, and is available across the UK.

"I've always said that we must be ready to adapt our financial support as the situation evolves, and that is what we are doing today. These changes mean that our support will reach many more people and protect many more jobs," Mr Sunak said.

"I know that the introduction of further restrictions has left many people worried for themselves, their families and communities. I hope the government's stepped-up support can be part of the country pulling together in the coming months."

Responding to his statement, shadow chancellor Anneliese Dodds criticised the government for what she said was a "patchwork of poor ideas, rushed out at the last minute".

She said its approach to support for areas entering tier three had been "nothing short of shambolic".

In other political reaction, Greater Manchester mayor Andy Burnham tweeted that the new measures had not been "put on the table" during negotiations with the government this week that failed to agree a £65m package of support.

"Honestly, can barely believe what I'm reading here," he said.

Honestly, can barely believe what I’m reading here. 👇
Why on earth was this not put on the table on Tuesday to reach an agreement with us?
I said directly to the PM that a deal was there to be done if it took into account the effects on GM businesses of three months in Tier 2. https://t.co/w2AeeLitGP

English councils will be funded to give monthly grants of up to £2,100 to 150,000 hotels, restaurants and B&Bs. Devolved nations will be given the equivalent funding for other nations, under the Barnett Formula.

The generosity of the self-employment scheme has also been doubled from 20% to 40% of profits, with a maximum grant now of £3,750 a month.

The changes to the JSS mean that employers are still obliged to establish whether they can continue to pay just over a fifth of usual employees for workers they wish to keep on.

At the time, some business groups and unions criticised the idea of forcing employers to calculate which jobs were "viable".

That approach was deemed appropriate by the government for a period of recovery, when the pandemic was in retreat, says BBC economics editor Faisal Islam.

However, that situation has now changed, and the new levels of generosity of the scheme indicate the government is acknowledging that large swathes of the economy are in survival mode, our editor adds.

Ndigbo, We Defend Thieves: Open Letter To The Igbos