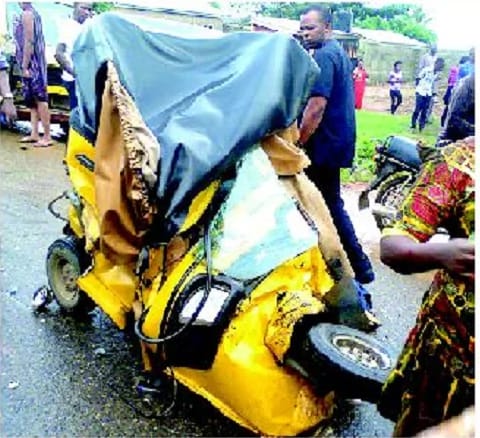 Two commercial motorcyclists popularly known as Okada riders have lost their lives, while several others have sustained various degrees of injuries after an accident at the Okegbegun area, near Lagos State Polytechnic (LASPOTECH), Ikorodu campus.

One of the crashed tricycle

A Total petrol tanker was said to have rammed into the motorcycles, two tricycles, a Sport Utility Vehicle (SUV) and a Mazda bus, while trying to bypass a broken down trailer on the busy road.

The motorcyclists died on the spot, while the injured, including the tricycles’ drivers were immediately taken to the hospital for emergency attention.

According to the officials of the Lagos State Traffic Management Authority (LASTMA), the accident was as a result of impatience on the part of the motorists.

One of the LASTMA officials who requested anonymity because he is not in position to talk on the matter, said they were planning to move the broken down trailer away from the road side, before the incident occurred.

“The accident happened as the tanker heading to Odogunyan rammed into the tricycles, bikes and the SUV. Although they all tried to manoeuvre but it was to no avail.”

An eye witnesses said the tanker driver ran away after the incident due to his impatience, he tried to manoeuvre but unfortunately his break failed.

“Two of the bike men died instantly and those in the tricycles were injured. All the dead and injured persons have been taken to the government hospital,” he said.

A truck driver recently died after an over speeding trailer swerved to the other side of the road and collided with the truck coming from the opposite direction.

The accident that involved a Toyota Camry car was said to have occurred after the trailer driver lost control. The accident caused a traffic gridlock yesterday along the ever-busy Ikorodu road, around the Onipanu area of Lagos. Original Article

Woman gets married and gives birth on same day (photos)