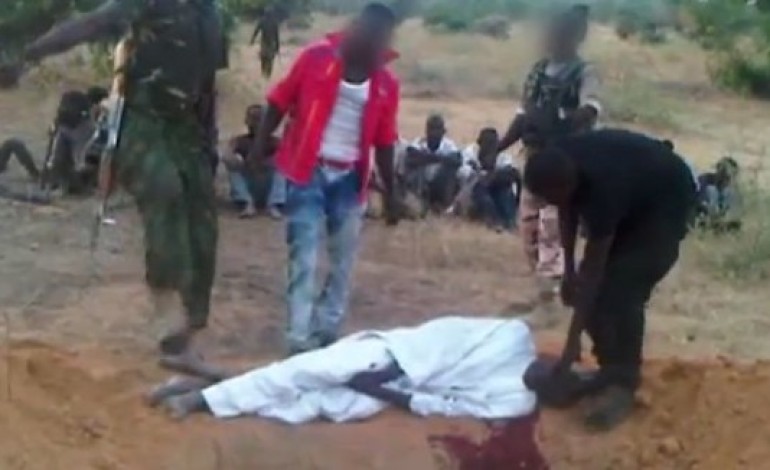 Amnesty International claims that the Nigerian military has committed atrocities in the North-East in its fight against Boko Haram.

In the video released today, the military is recorded on camera abusing civilians who are believed to be suspected members of the Islamist militant sect.

The video was obtained by numerous sources during a visit by a rep for Amnesty International. It provides fresh evidence of war crimes including extrajudicial executions, and other serious human rights violations

In one part of the video, detainees are seen having their throats slit one by one and dumped in mass graves by men who appear to be members of the Nigerian military and the Civilian Joint Task Force (CJTF)

Chris Olukolade, Director of Defence Information has sent out a press release;

Gentlemen of the Press,

Welcome to this press briefing which was compelled by the urgent need to clarify some developments arising from our counter-terrorism operations in the country.

The Nigerian military welcomes the interest being shown by international bodies and civil society groups on the observance of Human Rights in all aspects of ongoing counter terrorism campaign in Nigeria. Despite the highly challenging and peculiar nature of the variables in the operations, the importance of accountability for all actions has remained paramount. The Armed Forces of Nigeria is conscious of the nation’s obligation to observe all rules, regulations and commitments in all activities, and wishes to reassure the international community, bodies and citizens that it will not encourage or condone any form of violation.

It is expedient to particularly address the recent allegation of gross Human Rights abuses leveled against the military by the Amnesty International and those circulating video footage purportedly showing Nigerian military carrying out extra-judicial killing of suspected terrorists.

For the records, we must unequivocally state that the Nigerian military takes the issue of Human Rights seriously and will never condone any proven case of abuse by its personnel. Military authorities are deeply concerned about the set of video footage being circulated and which unfortunately has also become reference data for Amnesty International in its report. Much as the scenes depicted in these videos are alien to our operations and doctrines, it has to be investigated to ensure that such practices have not crept, surreptitiously into the system all to the detriment of expectations, in line with best practices to which the nation’s military has committed itself.

The Defence Headquarters considers these allegations too grievous to be associated with Nigerian troops, considering the doctrinal and operational contents of the training imparted to personnel on a continuous basis; emphasizing the importance of respect for Human Rights and dignity of human person as well as observance of humanitarian laws. Rather, the scenes in that video clip clearly depict a pattern consistent with the atrocious operations of the terrorists.

Notwithstanding the cases of impersonations that have pervaded the counter terrorism operations in Nigeria and many other related issues which cast doubts on the claims made in the video, the Defence Headquarters views those grave allegations very seriously, more so as it borders on the integrity of the ongoing counter-terrorism operation, which must be sustained in the interest of our national survival.

You will recall that a Joint Investigation Team (JIT) was earlier constituted based on previous allegations of human rights abuse. The JIT is still in place and have regularly conducted visits to detention facilities. It is currently on tour of some of such facilities across the country. The JIT has also regularly forwarded names of those suspects who are culpable to the Ministry of Justice for prosecution. An additional list is currently being compiled to facilitate the decongestion of detention facilities.

These attempts at protecting the rights of detained terror suspects categorically point to the fact that as a professional institution with thorough-bred officers and men, the Nigerian military cannot be party to such degree of savagery, as portrayed in the video footage available to Amnesty International. The Nigerian military has over the years demonstrated a pedigree devoid of such acts in several operational theatres in and out of the country. There is no reason why this should change at this stage of our national life.

Without mincing words, the Nigerian Armed Forces cannot condone any action or inaction that tramples on the right to life of any Nigerian. The ultimate objective of Nigeria’s counter-terrorism operation is the complete cessation of the heinous and barbaric activities of the terrorists and to stamp out every vestige of terrorism in our country with the application of international best practices in such operations. It will, therefore, be absurd for the Nigerian Armed Forces as an institution to perpetrate such unprofessional acts in the manner and level depicted in that video as alleged by Amnesty International. Respect for the sanctity of life is always boldly emphasized in our doctrinal trainings. Indeed, that level of barbarism and impunity has no place in the Nigerian military. It must thus be reiterated that the Nigerian military is a very well organized professional body of troops whose conducts in war and peace times are guided comprehensively by law.

We assure Nigerians and indeed the international community that the Nigerian Armed Forces recognizes the concern of Amnesty International as well as other similar bodies and therefore remains committed to the observance of the rules of engagement and human rights in its counter-terrorism operations.

I Caught My Girlfriend Sleeping Around Shamelessly