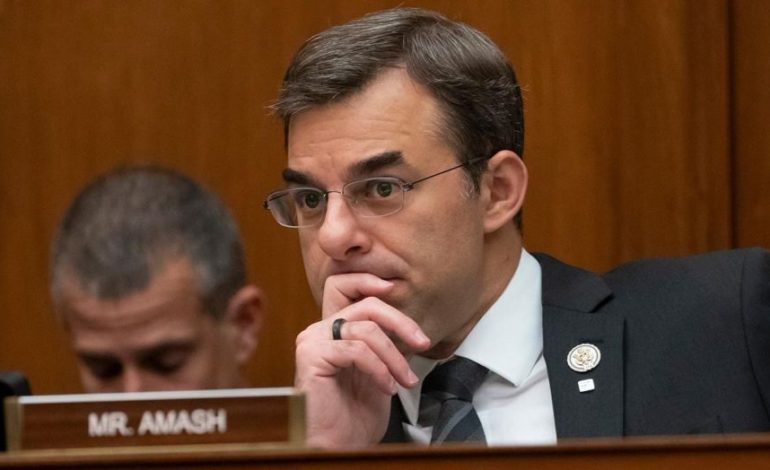 The folks on the Outnumbered couch weighed in on President Trump slamming Michigan Rep. Justin Amash, who announced Thursday that he was leaving the Republican Party.

In a Washington Post op-ed that was timely published on Independence Day, the liberatarian and outspoken Trump critic, who previously called for the president's impeachment, explained why no longer associates himself with the GOP.

"In recent years, though, I’ve become disenchanted with party politics and frightened by what I see from it,” Amash wrote. “The two-party system has evolved into an existential threat to American principles and institutions.”

Trump celebrated Amash's decision on Twitter, calling him "one of the dumbest & most disloyal men in Congress."

"Great news for the Republican Party as one of the dumbest & most disloyal men in Congress is 'quitting' the Party," Trump tweeted. "No Collusion, No Obstruction! Knew he couldn’t get the nomination to run again in the Great State of Michigan. Already being challenged for his seat. A total loser!"

Actor Dean Cain, who was Friday's "one lucky guy," began by insisting that Amash "wasn't exactly a Republican" and that he would likely not earn his party's nomination due to a rising challenger. He then pivoted to Trump's tweet.

"That's President Trump at his best and worst, if you will," Cain told the panel, "because he says stuff like that and we were all reacting to it because it's how you would talk if we were sitting in the back having coffee and the cameras weren't on. … He says it like he thinks it and he puts it out there. And some people love him for it and some people hate him for it."

Fox Nation's Carly Shimkus said she wished the president would "stay away from tweets like this." Fox News anchor Julie Banderas agreed.

"I don't like the word 'loser.' Ever," Banderas said. "I would never allow my children to use it. I wouldn't want them hearing the president of the United States using that word, either."

Fox News contributor Kat Timpf told the panel that Amash's "bigger point is getting lost" in the conversation about the "frustration with the two-party system."

"I, too, am frustrated with the two-party system because I''m not a Republican or a Democrat and I just don't understand why it is the way it is," Timpf explained. "I mean, it's just not true that each half of the population only believe in one set of views or the other set of views when really there are infinite combinations possible."

She continued, "What about just being free thinker and having independent thought? I mean, people care more about partisanship now than they care about truth and I think that's so wrong."

Dr. Nicole Saphier noted how Trump "used to be a Democrat" and suggested that he's a "good leader" for cherry-picking policies from both sides of the aisle.

#Wizkid officially announces Sunday Are as his new manager

Guess Who This Fired Up Kid Turned Into!