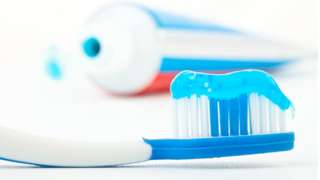 Plastic microbeads to be banned by 2017, UK government pledges

The UK government has announced plans to ban microbeads used in cosmetics and cleaning products by 2017.

The small pieces of plastic commonly found in toothpaste, exfoliating body scrubs and other household products and are thought to damage the environment.

Environmentalists fear they are building up in oceans and potentially entering the food chain.

A consultation on how a ban would work will start later this year, Environment Secretary Andrea Leadsom has announced.

A number of cosmetic companies have made voluntary commitments to phase out the use of microbeads by 2020.

How do you know if a product contains microbeads?

Products that contain the tiny bits of plastic won't necessarily say "microbeads" in the list of ingredients.

Instead, look for the words polyethylene, polypropylene and polymethylmethacrylate – the chemical names for plastics. Nylon may also be listed as well as the abbreviations PET, PTFE and PMMA.

There are several websites listing products that do and do not include plastic such as Beat the Microbead. It also has a free app where you can check products by scanning the barcode with your smartphone camera.

Many cosmetics brands include information on their websites. Johnson & Johnson which produces face scrubs under the brands Neutrogena and Clean & Clear has committed to phasing out microbeads by the end of 2017.

Proctor and Gamble which owns Crest toothpaste, Gillette and Olay, has also promised to stop using them by next year.

Read more: Why are microbeads controversial?

The House of Commons Environmental Audit Committee last month said the government needed to step in to protect the environment as soon as is practicable, after it was revealed a single shower can result in 100,000 plastic particles entering the ocean.

Mrs Leadsom said: "Most people would be dismayed to know the face scrub or toothpaste they use was causing irreversible damage to the environment, with billions of indigestible plastic pieces poisoning sea creatures.

"Adding plastic to products like face washes and body scrubs is wholly unnecessary when harmless alternatives can be used."

She said it was the "next step in tackling microplastics in our seas" following the introduction of the 5p plastic bag charge, which was introduced in England in October.

He said: "Over 680 tonnes of mircrobeads are used in the UK alone every year. That's substantially more than all of the litter we pick up on our beaches in voluntary beach cleans each year, so it's not a trivial quantity.

"The sooner we can make progress with avoidable, unnecessary emissions, because it's not clear to me at all why we need to cleanse ourselves by rubbing our skin with millions of small, plastic particles. What's the societal benefit there?"

The environment committee's report suggested microplastic pollution could be more damaging to the environment than larger pieces of plastic because its size makes it more likely to be eaten by wildlife and then potentially enter the food chain.

As an example, it said a plate of six oysters can contain up to 50 particles of plastic.

More than 280 marine species have been found to ingest microplastics, but the committee said much more research was needed into plastic pollution because there was huge uncertainty about the ecological risk.

It added there was "little evidence" about the potential human health impacts of microplastic pollution, but said further research was "clearly required".

Commenting ahead of the government's move, Greenpeace UK senior oceans campaigner Louise Edge said: "It's a credit to Theresa May's government that they've listened to concerns from the public, scientists and MPs, and taken a first step towards banning microbeads.

"Marine life doesn't distinguish between plastic from a face wash and plastic from a washing detergent, so the ban should be extended to microplastics in any product that could be flushed down the drain.

"If Theresa May wants to show real leadership on this issue, that's the kind of ban she should back."

The US recently became the first country to announce it would ban microbead use in cosmetics, with pressure growing globally to take action.

The European Commission is also currently developing proposals to ban them in cosmetics across the EU, following calls from a number of member states.

Actress Ella Martins Wants You To See Her Massive Assets

Ladies Are More Than Men, I Do Not Mind Being A Second Wife – Nollywood Actress