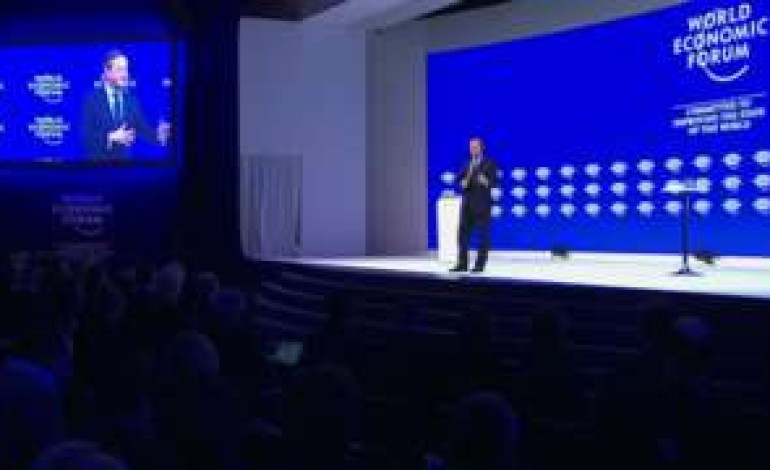 David Cameron has urged business leaders who want Britain to remain in a reformed EU not to "hold back".

The PM has told his cabinet colleagues to wait until he returns from Brussels with a reform deal before campaigning to leave or stay in the EU.

But he told an audience of global business leaders they should "get out there" and start making their case now.

He was speaking during a three-day visit to the World Economic Forum in Davos, Switzerland.

Mr Cameron said he hoped to get agreement on his reform demands at an EU summit next month, paving the way for referendum later this year, but he was in "no hurry" if the deal was not right.

Prospects for a swift agreement were played down by French Prime Minister Manuel Valls, who said the negotiations had "only just begun" and warned that a deal "at any price" would not be acceptable.

Mr Cameron said his proposed welfare reforms were "absolutely crucial" to his hopes of getting a reform deal.

But he said he was open to other, "equally potent", welfare curbs if other EU nations refused to accept a four year ban on in-work benefits for new arrivals to the UK.

He said he would continue to push for reforms to the EU in the future even if Britain voted to remain in it – and stressed that he believed the UK could succeed outside the EU, but he said the question was "how will we be the most successful?"

Success in the renegotiation could deliver the UK "the best of both worlds" by allowing it to be within the single market while retaining control of its borders and remaining outside the single currency and the ever-closer union sought by some other member states.

He said it was "a prize worth fighting for" and one "I'm determined to deliver in this, my second term as prime minister" and he issued a plea to businesses and charities to get behind him.

"I would say don't hold back right now, even though the question isn't settled.

Mr Cameron explained why Britain was having a referendum – that it was "drifting away" from the EU, which had become increasingly unpopular with the British public.

He said he wanted to "secure the future of Britain in a reformed European Union" and to do this by securing "full and democratic support" for membership from the public.

Meanwhile, in London, Downing Street said a cabinet meeting would be held "soon after" any deal was agreed – following concerns a delay could assist the campaign to remain in the EU.

Some ministers had raised concerns that a delay to holding a cabinet meeting would give Mr Cameron the opportunity to set out his case for the deal without being challenged.

However, Number 10 said a cabinet meeting would be held "in good order" after any agreement, but said it could not guarantee a day or time.

Liz Bilney, chief executive of Leave.EU, said: "The fact that the prime minister is begging for international corporations to stick their noses into our democratic process only shows how little he and the elite care for ordinary British citizens."

Matthew Elliot, who heads Vote Leave, suggested Mr Cameron's speech was aimed at big business but it was "the smaller businesses who are most hurt by EU regulation".

Sir Stuart Rose, chairman of Britain Stronger in Europe, said Mr Cameron's speech "underlines the importance of our place in Europe to Britain's economy and prosperity, and to businesses large and small".

"I have urged British business to speak up about Britain's place in Europe without fear or favour. Leaving Europe would have a profound impact on our economy for generations to come, so I refuse to accept that British business should be a silent partner in this debate."

CBI director general Carolyn Fairbairn said: "The majority of CBI members want the UK to be in a reformed EU – changing it for the better, not just for the UK but for all member states… there are several areas where the EU needs to raise its game. Businesses want to see more trade deals, completion of the single market and less red tape."

The Institute of Directors urged businesses not to "bury their heads in the sand" over the EU referendum and had "a duty to their shareholders, employees and customers to be discussing the implications of the vote at the most senior levels".

Referendum timeline: What will happen when?

Guide: All you need to know about the referendum

Q&A: What does Britain want from Europe?

Photos: Waconzy poses with a stack of $100,000 notes in Hollywood

How long should sex really last? The answer may surprise you