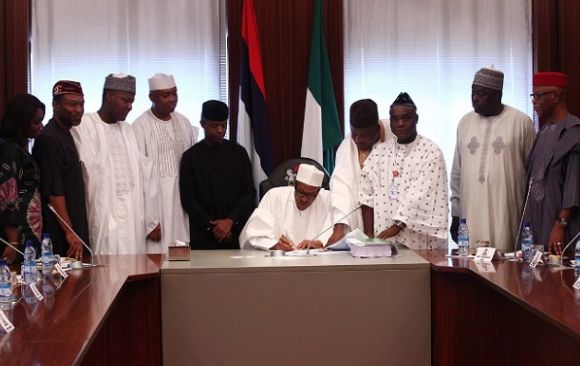 Welcome to a Nigeria in recession, where only those who spend wisely can survive the days, weeks and months ahead. Long before July 21, 2016, when the Minister of Finance, Mrs. Kemi Adeosun, stated that the country was ‘technically in recession,’ it had been an arduous battle for survival for many citizens, organizations and governments at all tiers.
In spite of government’s assurances, Nigerians were faced with the challenge of petroleum scarcity, epileptic power supply amid increase in electricity tariff, removal of subsidy on petrol, hike in cost of food, goods and services, unprecedented scarcity of tomatoes, skyrocketing exchange rate of the naira to a dollar, backlog of unpaid salaries and mass retrenchment of workers.
The first half of the year was rough.
Government kept repeating that the tide would turn once the 2016 budget was passed and the second half of the year would be better for the country and its citizens.
President Buhari eventually signed the budget on May 6, raising the hopes of turnaround with the injection of government funds across critical sectors of the economy.
With four months left in the year, it’s a stark reality of a depressed economy staring Nigerians in the face as strange things are reported daily.
Organized and petty crimes are on the increase, unsecured pots of soup have become endangered species, sale of human blood and organs for economic reasons is rife, and frustrations have given rise to rampant cases of domestic violence (husband beating wife out of anger), child abuse and suicide.
According to Guardian, the hunger is so widespread that poultry farmers confess to skipping meals for their birds as the cost of feed has risen by 100 percent.
Even in the president’s home state of Katsina , there was a massive scramble for unwholesome grain recently when the truck conveying bags of the suspected poisonous grains for destruction broke down in a village.
When persuasion failed, authorities had to engage the help of task force to retrieve some of the poisoned grains in a bid to avoid devastating consequences. The reality of poverty!
The new economic reality is affecting the lifestyle of Nigerians.
Today, an exchange of pleasantries is incomplete without the word ‘Change’ in reference to the evocative slogan that brought the present administration of the APC to power.
The standard reply to any untoward situation in the country is ‘Chanji’, the street version of APC’s motto – change. 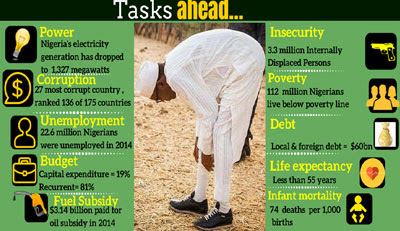 A public affairs commentator based in Kano State, Aminu Muhammad Ofs, last week recounted his experience of the times, which has gone viral on social media.
He said: “I was sitting with a guy who sells tea when an elderly man came and said ‘Give me ‘Buhari’s mixture’. Without saying anything more, the man was given some tea and small bread for a sum of N40.
I was baffled, so I asked the seller what the man meant by ‘Buhari’s mixture’. He explained that it means tea without milk plus a small loaf of bread.
“Again the next day, I stopped by a small kiosk to get a battery for my wireless computer mouse. While I was leaving, a guy came who said: ‘Give me Buhari and Osinbajo'. I waited to see what he meant and the seller handed him garri and groundnut.
“I inquired from the seller, who explained that garri is now the street term for President Buhari, Vice President Yemi Osinbajo is groundnut, while Senate President Bukola Saraki is sugar, slang for the staple foods the poor can afford.”
Before now, Lagos State was often referred to the city that never sleeps, because it is known for its hustle and bustle from dawn to dusk.
The wind of recession has blown all that away.
The bustling nightlife is disappearing in the Centre of Excellence, as the city practically shuts down and becomes a ghost town once it is 10p.m., even on weekends.
Due to the harsh economic conditions in the country, Nigerians have developed some clever methods of dealing with the tough circumstances.
According to a public opinion survey by NOIPolls, released on August 10, 2016, 97 per cent of the respondents said the recent economic realities have had a negative effect on the wellbeing of the average Nigerian.
Some survival methods discovered by the polls include cutting down on household expenses and luxury items, resorting to prayers and hoping for a miracle, engaging in subsistence farming, adjusting feeding patterns in place of the regular three-square meals.
A businessman, Emeka Obinna confessed to Guardian that he has adjusted his family's feeding.
“I have a family of six, with several other dependents. That’s the only way we are managing to survive. No more three-square meals. It is either breakfast and dinner, or lunch and dinner. So, it is the 1-0-1, 1-1-0 or 0-1-1 formula I am operating now with the little resources at my disposal.”
Read More

Man says he is the sexiest man alive, you need to see his photos

Pregnant secretary of Pope Francis found dead in her home