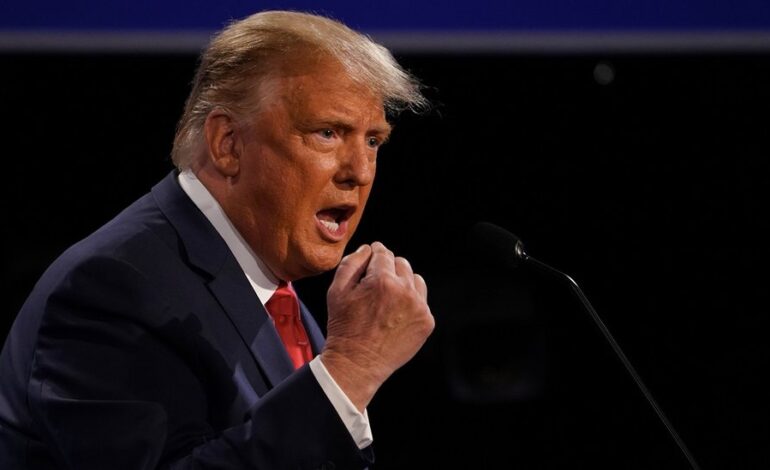 US President Donald Trump and his White House challenger Joe Biden clashed over Covid and race while trading corruption charges, in their final live TV debate.

On the pandemic, Mr Biden would not rule out more lockdowns, while Mr Trump insisted it was time to reopen the US.

Mr Biden has a solid lead with 11 days to go until the presidential election.

But winning the most votes does not always win the election, and the margin is narrower in a handful of states that could decide the race either way.

More than 47 million people have already cast their ballots in a voting surge driven by the pandemic.

This is already more than voted before polling day in the 2016 election. There are about 230 million eligible voters in total.

What was the overall tone?

Thursday night's primetime duel in Nashville, Tennessee, was a less acrimonious and more substantive affair than the pair's previous showdown on 29 September, which devolved into insults and name-calling.

Following that political brawl, debate organisers this time muted microphones during the candidates' opening statements on each topic to minimise disruption.

But the 90-minute debate, moderated by NBC's Kristen Welker, was the scene of plenty of personal attacks between the opponents, whose mutual dislike was palpable.

In individual closing argument to voters, they offered starkly different visions for the nation on everything from shutting down the country to tackle coronavirus, to shutting down the fossil fuel industry to confront climate change.

Nowhere was the distinction between the two candidates more apparent than in their approach to the pandemic.

Asked about his support for more lockdowns if the scientists recommended it, Mr Biden, a Democrat, did not rule it out.

But Mr Trump, a Republican, said it was wrong to inflict further damage on the economy because of an infection from which most people recover.

"This is a massive country with a massive economy," said the president. "People are losing their jobs, they're committing suicide. There's depression, alcohol, drugs at a level nobody's ever seen before."

Mr Trump, 74, declared that the virus was "going away" and that a vaccine would be ready by the end of the year, while Mr Biden warned the nation was heading towards "a dark winter".

The president said: "We're learning to live with it." Mr Biden, 77, countered: "Come on. We're dying with it."

Mr Biden laid blame for the 220,000-plus American deaths as a consequence of the pandemic at Mr Trump's door.

"Anyone who's responsible for that many deaths should not remain president of the United States of America," he said.

'This guy is a dog whistle'

During a back-and-forth on race relations, Mr Trump said: "I am the least racist person in this room."

He brought up the 1994 crime bill that Mr Biden helped draft and which Black Lives Matter blames for the mass incarceration of African Americans.

But Mr Biden said Mr Trump was "one of the most racist presidents we've had in modern history. He pours fuel on every single racist fire".

He added: "This guy is a [racial] dog whistle about as big as a fog horn."

Once again, Mr Biden largely held up under fire – avoiding the kind of gaffes and stumbles that could have played into Republican attempts to question his age and mental acuity.

The Trump campaign will try to make an issue out of Mr Biden's call for a "transition" from oil-based energy – a risky thing to throw in at the tail end of the debate. In an era of hybrid cars and energy-efficient homes, however, when even petroleum companies employ similar language, it may not hit Americans as hard as Republicans imagine.

In the end, the raucous first debate probably will be what the history books record. And with polls showing most Americans already having made up their minds – and more than 45 million already having voted – the chance that this evening has a lasting impact on the race seems slim.

Bank accounts 'all over the place'

But Mr Biden denied the president's unfounded insinuation that the former US vice-president somehow had a stake in the ventures.

"I think you owe an explanation to the American people," said Mr Trump.

Mr Biden said: "I have not taken a single penny from any country whatsoever. Ever."

The former vice-president referred to the New York Times recently reporting that Mr Trump had a bank account in China and paid $188,561 in taxes from 2013-15 to the country, compared with $750 in US federal taxes that the newspaper said he had paid in 2016-17 when he became president.

'Trouble ahead' on climate

Mr Biden described climate change as an "existential threat to humanity" and attacked Mr Trump for cutting curbs on polluters.

"Four more years of this man eliminating all the regulations that were put in by us to clean up the climate… will put us in the position where we're going to be in real trouble," he said.

Mr Trump defended his decision to pull out of the Paris Climate Accord, saying he would not "sacrifice tens of millions of jobs, thousands and thousands of companies" for the agreement.

The two clashed on energy policy, as Mr Trump asked his challenger: "Would you close down the oil industry?"

He said Big Oil – a reference to big oil companies – had to be replaced by renewable energy over time with the US moving towards net zero emissions.

The Biden campaign afterwards said their candidate had been talking about ending oil subsidies.

'Who built the cages, Joe?'

The two again argued when Mr Trump was asked about his policy of separating hundreds of children from undocumented immigrant adults at the southern US border.

The president pointed out that migrant children were also detained under the Obama administration.

"Who built the cages, Joe?" he said, referring to the chain-link enclosures where unaccompanied migrant children were held during the Obama-Biden administration.

But the former vice-president said the Trump administration had gone further by separating families and the practice was "criminal".

Any other stand-out moments?

Not surprisingly, both candidates accused the other of unfulfilled promises while in office.

Mr Biden took his opponent to task for his pledges to come up with a healthcare plan to replace Mr Obama's Affordable Care Act. Mr Trump had been talking about making such a move for years but "he's never come up with a plan", the Democrat said.

The president, meanwhile, talked about what he said was Mr Biden's own inactivity while in office.

"You keep talking about all these things you're going to do… but you were there just a short time ago and you guys did nothing," he said.

The Mo Hits Issues: D’Banj Spills It All On The Truth With Olisa

8 Embarrassing Sex Questions You Are Too Shy To Ask

Ribadu Came To My House To Beg Me, Says Atiku