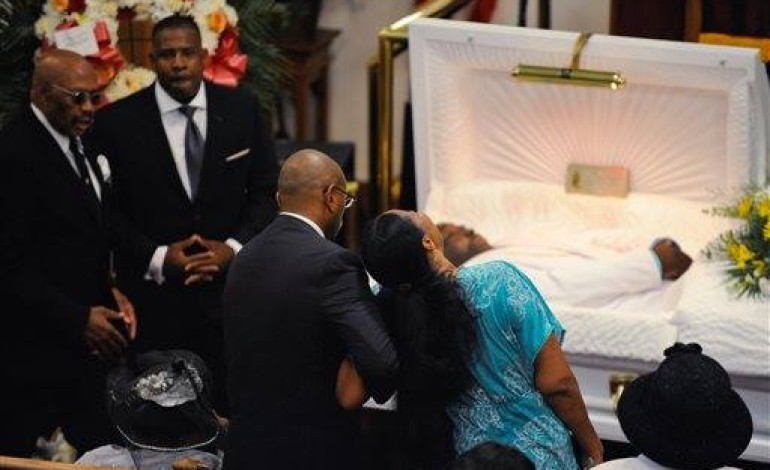 We reported last week about a New york man who died while the police were trying to arrest him. Eric garner’s funeral service held on wednesday, 23rd july and an overflowing crowd filled the church to bid farewell to him.

Eric Garner’s relatives stopped in front of his open casket, some weeping and wailing. A preacher opened the service at Brooklyn’s Bethel Baptist Church with a mix of solemn prayer and an organ-backed gospel medley.

Garner, who had asthma, died last week on Staten Island. An amateur video shows a plainclothes police officer placing him in what appears be a chokehold. Garner can be heard gasping, “I can’t breathe!”

At the church, the program depicted Garner as an angel and included a collage of photographs from his life and death, including one of a sign echoing what he told officers before he died: “This Stops Today.”

The Rev. Al Sharpton told the crowd he was scheduled to meet Friday with the U.S. attorney’s office, and he called for a civil rights probe. He took Ramsey Orta, the man who shot the video, to the lectern and praised him for recording the arrest.

Sharpton fired up the crowd with a point-by-point dissection of the events that led to Garner’s death.

“Yes, God will make a way, but God expects something of us,” he said. “When you can, in broad daylight, choke one of God’s children, he expects us to stand up and demand justice.”

Sharpton compared Garner’s death to that of Diallo, who was shot by officers who said they thought a wallet was a gun.The crowd included relatives of other men killed in interactions with police: Amadou Diallo and Sean Bell.

“What excuse could you come up with this time?” Sharpton asked.

He said even if police forgot their training and used an illegal chokehold, they and medics needed to react when Garner said repeatedly, “I can’t breathe.”

Breaking: Vacancy in the Nigerian Senate?

6 factors that will help to sustain peace in Niger Delta