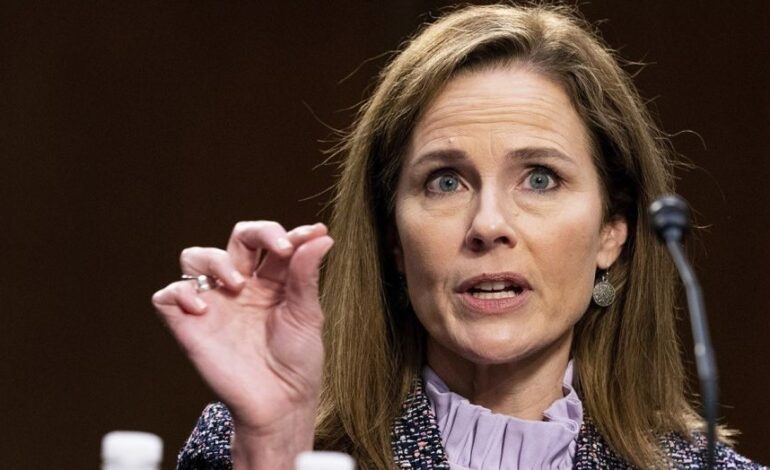 Aimee Buccellato, a friend of Amy Coney Barrett, reacts to the judge’s nomination to the Supreme Court.

At Judge Barrett’s Judiciary Committee confirmation hearing we learned a great deal about her approach to the law, but even more about how willing Senate Democrats are to sacrifice the foundations of the republic on the altar of big government.

We watched and listened as the Democrats used their time at the hearing to rail about COVID-19 spending bills and their terror of a world without the Affordable Care Act. Never mind that two weeks ago every one of them chose to vote against much-needed legislation that would have provided relief to individuals, businesses, and schools impacted by the coronavirus pandemic — along with funding for vaccines and testing. They don’t want a solution; they want a campaign issue.

Over the course of four days, the liberal wing of the Judiciary Committee threw all the mud they had against the hearing room walls, taking full advantage of the chaotic news cycle in a last-ditch effort to portray Judge Barrett as a corrupt tool of the Trump administration.

At every turn, they conflated the issue at hand — which was, believe it or not, the examination of Barrett’s prodigious record — with a panicked defense of their own disastrous policies.

Throughout the whole disgusting performance — the fake emotion, the condescending displays of disapproval, the blatant suggestions that Judge Barrett was far too simpleminded to deserve her appointment — Barrett sat quietly, composed.

Democrats did not ruffle or anger her. She kept control of the debate, and quickly made it clear that underestimating her abilities was a terrible mistake.

What the left obviously does not appreciate is that women on the political right are on to them. We live with the bias and prejudice thrown at us every day by the left and the liberal media.

If you want to meet someone who is rock-solid in her conservative principles, take some initiative and meet a conservative woman. This is the reason I wrote my book, “The Mind of a Conservative Woman.”

We have come to expect that our pro-life, family, religion, business, and military views have painted a target on our backs, welcoming accusations from the left that we are somehow not fully female.

For years, liberals in Washington have relied on the courts to massage constitutionally suspect legislation into something resembling respectable policy. So it’s no surprise that Judiciary Committee Democrats squandered the vast majority of their time trying to trick and manipulate Judge Barrett into guaranteeing she would use her vote to rubber stamp a party platform — a tactic that failed them miserably.

Undeterred, they threw down their pens and ridiculous charts and declared that if /Judge Barrett couldn’t guarantee progressive outcomes, she had no choice but to recuse herself from any number of a vaguely defined set of cases.

Of course, Judge Barrett could no more guarantee the safety and prosperity of blue state constituents than she could a world free from abortion and socialized health care. Everyone in the room knew this.

Sensing their own unraveling, the Judiciary Committee’s left wing turned the dais into a stump and launched a mind-numbing volley of accusations of rank corruption, backroom deals and outright conspiracy.

Here’s the important distinction between the two sides of that dais: while one Democratic senator stated that he feared Barrett would usher in an era of conservative activism, he accidentally revealed that what Democrats want is an era of liberal activism.

The Democrats, in their zeal to “pack the court,” or at least “balance” it — as they kept insisting was key to delivering justice — are looking for activists who will do the party’s bidding. That’s what they expect.

Conservatives, on the other hand want constitutionalists who will call balls and strikes. If a law needs changing, that’s our job in Congress, not the business of the judiciary.

This is our commitment to the American people: that no election, high-stakes appointment, or policy battle will cut the mooring lines that keep us grounded in the Constitution and the founding freedoms that make America so special.

I understand how important that connection is, as do millions of conservative women and, most crucially, as does Judge Amy Coney Barrett — and that’s why this conservative woman will be more than happy to stand on her behalf and support her confirmation on the Senate floor when the time comes.

The best, worst and zaniest moments from the Golden Globes

United’s £150M Spending Spree Summit Begins Today As They Bid To Keep Up With City, Chelsea