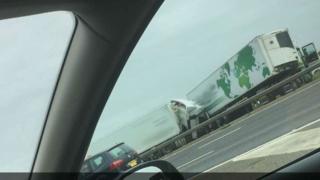 Several people have died and four others have been taken to hospital after a motorway crash involving a minibus and two lorries, police say.

It happened on the southbound M1 at Newport Pagnell in Buckinghamshire just before 03:15 BST.

Thames Valley Police said the minibus was believed to have travelled from the Nottingham area.

Two men have been arrested on suspicion of causing death by dangerous driving and are in police custody.

The southbound carriageway is due to remain closed "for a significant amount of time" while emergency services work at the scene.

The vehicles were all travelling in the same direction between junctions 15 and 14, police said.

Highways England said traffic trapped between junctions 15 and 14 was being released past the scene, and diversion routes were in place from junction 15, with traffic following the A508, A5 and A509 to rejoin the M1 at junction 14.

Northamptonshire Police have asked people travelling to the British Moto GP at Silverstone to allow more time for their journey.

Ch Insp Henry Parsons, of Thames Valley Police, said: "Emergency services are currently on the scene responding to this collision and road closures are in place.

"I would appeal to anyone who witnessed the collision and has not yet spoken to officers to please contact us."

The M1 is expected to be one of the country's busiest roads over the Bank Holiday weekend.

Here’s Flabba’s girlfriend who allegedly stabbed him to death

After Humiliating Finish at World Cup, Luiz Felipe Scolari is Out as Brazil’s Coach

The Things my Big Ikebe has Caused Me - Actress Didi