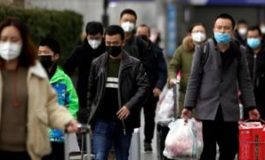 A woman has told how she was pushed and stabbed by the Streatham attacker – but not hurt because he "didn't realise the knife still had plastic packaging on".

Rosa, not her real name, was in a shop in Streatham High Road on Sunday when Sudesh Amman, 20, launched his attack.

She described it as "like a movie" as Amman stabbed two people before being shot dead by police in south London.

Rosa said it was "horrific", adding: "Someone could have killed me when I was just going out to the shop."

One of the victims has been named as 51-year-old nursery school teacher Monika Luftner.

Speaking in Spanish in an interview translated by BBC News, Rosa, who is originally from the Dominican Republic, said she had been in a corner shop for about five minutes when "the man came in… who hurt the other people".

She told the BBC's Lucy Manning: "He came in and took a knife and he looked like he was leaving the shop. The owner thought he was going to stop by the cashier to pay.

"But… he pushed me, he tried to open and remove the plastic packaging from the knife but he didn't manage.

"He pushed and he stabbed me but the knife was still covered with plastic."

Amman, who had previously been convicted of terror offences, was seen entering a shop in Streatham High Road shortly before 14:00 GMT on Sunday.

Once outside the shop he attacked two people before he was fatally shot by police – who had had him under surveillance – one minute later.

Rosa, 36, told how Amman ran from the shop after attacking her.

"There was a woman just there removing the lock from her bike. He stabbed her in the back on the right-hand side," she said.

She went on to describe how Amman "went up the road shouting" before stabbing a man further up the road.

Amman wore an imitation suicide belt during the incident. He had been released from prison about a week ago after serving half of a sentence for terror offences, and was under police surveillance.

Rosa said she has not been able to sleep since Sunday. "It's hard even to think about it," she said.

"It's really scary that you can die from one day to the next.

"I have to go to work and walk around the streets… this is something that stays with you. It's a really bad trauma.

"You don't have any enemies and suddenly someone tries to kill you just like that, just because it satisfies them. It's horrific."

When the attack was over Rosa said she returned to her flat nearby, and "gave my mum a hug, my daughter and my granddaughter. It is God's miracle that I am alive".

Sunday's attack was the second by men convicted of terror offences in recent months.

In November, two people were killed near London Bridge by Usman Khan, who was out on licence from prison.

On Monday, the government said it would introduce emergency legislation to end the automatic early release from prison of terror offenders.

Three people were taken to hospitals following the attack in Streatham, including the two stabbing victims.

Mrs Luftner, a teacher at St Bede's Catholic Infant and Nursery School in Balham, is recovering at home with her partner.

In a statement, the school said she was making "a good recovery" and asked that her privacy be respected.

Police said the condition of the second stabbing victim – a man in his 40s – was initially considered life-threatening, but he is now in a serious but stable condition.

A woman in her 20s received minor injuries – believed to have been caused by glass following the police shooting – and has been discharged from hospital.

There are 224 people convicted of terrorism offences in prison in Great Britain, most of whom must be released at the end of their custodial sentence.

On Monday, Justice Secretary Robert Buckland said the government planned to change the law so terror offenders would be considered for release only once they had served two-thirds of their sentence and with the approval of the Parole Board – rather than half-way through, automatically.

The law change would apply to both current and future offenders, he said.

The government has also said it will consider making new legislation to ensure extremists are more closely monitored on release and review whether the current maximum sentences for terrorist offences are sufficient.

Khan had been released from jail on licence in 2018, half-way through a 16-year sentence for terrorism offences.

This prompted a raft of measures to be proposed by the Home Office in January.

Anaconda Shade!!! Nicki Minaj gets turned down by her High School Principal

Goodluck Jonathan Declares State Of Emergency In Nigeria Over Ebola