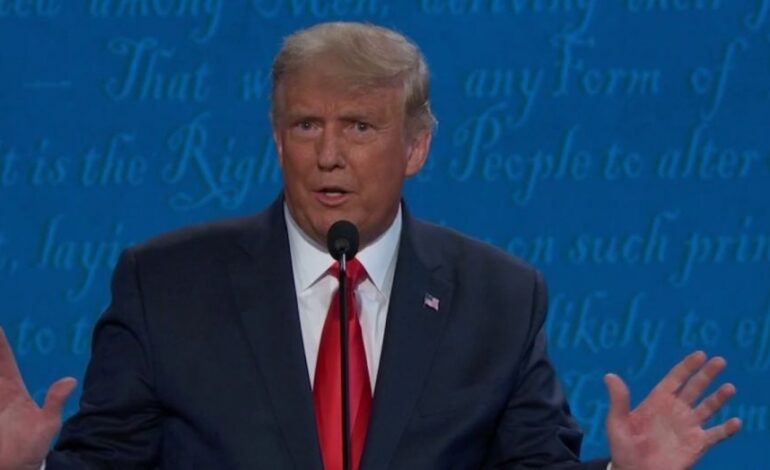 Trump vows to 'terminate' ObamaCare in favor of a better plan

President Trump appeared to have his microphone cut off for a brief moment while he was explaining his health care plan during the final presidential debate in Nashville, Tenn., on Thursday night.

"We have done an incredible job on health care and we're gonna do even better … " Trump said before his mouth continued to move but his voice was no longer heard.

After the first Trump-Biden debate in Cleveland on Sept. 29 was plagued by interruptions and insults — the majority by the president — the Commission on Presidential Debates announced a change to the scheduled format.

Each candidate was afforded two uninterrupted minutes to speak at the beginning of each 15-minute topic, with the microphone cut for the candidate who is not speaking during that time.

"President Trump is committed to debating Joe Biden regardless of last-minute rule changes from the biased commission in their latest attempt to provide advantage to their favored candidate," the president's campaign manager, Bill Stepien, said prior to the debate.

His mic had yet to be cut roughly an hour into the debate, according to the Washington Examiner.

In the final showdown between the two candidates, they both largely found themselves avoiding talking over each other, which was a relief for most people watching.

"I would have liked to have been able to moderate that debate and get a real exchange of views instead of hundreds of interruptions," said "Fox News Sunday" anchor Chris Wallace, who moderated the first debate.

OMG! Boobs On Display: So This Culture Is Still Going On? (photos)