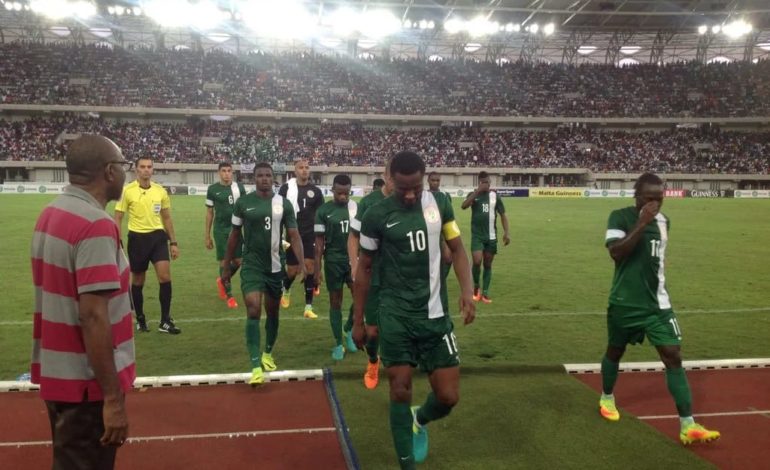 Manchester City striker Kelechi Iheanacho was the hero as Gernot Rohr got his first win as coach of Super Eagles in a hard fought 1-0 win over Tanzania.

Iheanacho stunning strike from 25 yards in the 81st minute was enough to earn Nigeria a win in their last game of in 2017 African Cup of Nations qualifiers.

Nigeria can no longer qualify for the 2017 AFCON but the win will be a morale boosting one for the national team who will turn their attentions to the 2018 FIFA World Cup qualifiers.

Read our live coverage below:

90+2′ Yellow Card. Leon Balogun is booked for a silly foul.

85′ We’re into the final five minutes in Uyo. The players have a water break as Coach Gernot Rohr looks quite happy with the result.

78′ GOALLLL!!! and what a strike it was from Kelechi Iheanacho. Nigeria 1-0 Tanzania.

58′ Iheanacho does well to create space and shoot but its tipped over by the goalkeeper. Moments later, Aishi Manula makes another fabulous save to deny Ahmed Musa.

53′ Iheanacho blasts one high when he should have kept it on target. Minutes later, Mikel heads over from a corner. Two chances goes begging.

50′ Nigeria pick up from where they left off, dominating the play but still unable to convert their chances.

46′ The second half is underway, which team is going to draw the first blood?

Nigeria with the chances but still no goals

36′ Tanzania try to mount a late spell of pressure in a bid to steal a goal just before the break, but there’s no way through as John Bocco is punished for being in an offside position

30′ WHAT A MISS!!! Ahmed Musa squares up Victor Moses in the Tanzanian defence the Chelsea winger powers his chance over the cross bar even when he had only goalkeeper Aishi to beat. What a miss!

28′ Musa Muhammed gets into the referee’s book after a wreckless challenge on John Bocco. A chance for Taifa Stars to launch an attacking move

25′ In case you missed it, these are the line ups;

21′ Great move from Iheanacho. He tries an attacking move but is brought down by Mwantika and the referee awards a freekick to the Super Eagles from a very scorable position

20′ The Super Eagles have made a bright start to the match and are asking many questions of the Tanzania defense…will the goal come through?

14′ Iheanacho manages to cross into the goal mouth. And Mikel Obi heads out of play. Not a bad start for the Super Eagles but they must make every chance count

13′ INCHES AWAY! Nigeria attack down that right hand side again, this time through Moses, who manufactures the space to shoot at goal but goalkeeper Aishi Manula makes a simple catch

Nigeria will play host to Tanzania on Saturday, September 3, as the Super Eagles look to gain a morale-boosting result in the 2017 African Cup of Nations qualifiers. 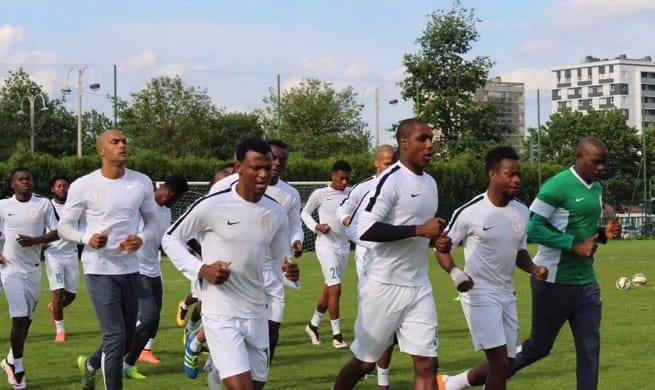 Super Eagles of Nigeria during a training session

The Super Eagles and their opponents Tanzania cannot qualify for the biggest football tournament in Africa which makes the game a dead rubber.

Group G leaders Egypt are already through to the competition. Nigeria are second in the group while Tanzania trail the group with just a point.

GET for FREE: Get the latest sports news on Naij Sports

German tactician Gernot Rhor will be taking charge of the Super Eagles for the first time after his recent employment as the head coach of the team.

Tanzania will be the outsiders when the game gets underway at the Godswill Akpabio Stadium in Uyo, but coach Charles Boniface Mkwasa will have every confidence in his side.

The Taifa Stars are still searching for their first win over the Super Eagles after five previous clashes. The first encounter between the two teams was at the 2nd All-Africa Games that Nigeria hosted in 1973, with Nigeria edging the tie 2-1.

Jonathan's Female Minister's Son Beats His Wife, Locks Her Up In The Bathroom

Elvina Ibru opens up on why she doesn't want to get married, also says she only dates younger men