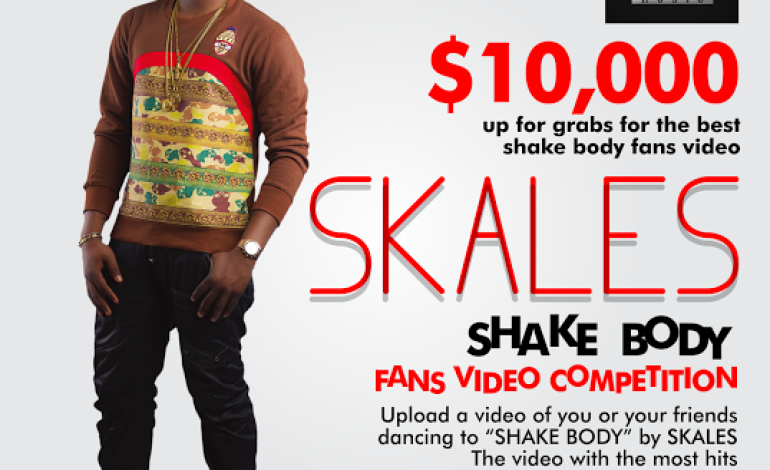 Skales, has announced an opportunity to gift one lucky fan or a group with 10,000 US Dollars.

The star artiste announced the competition at a world press conference in Lagos, Nigeria where the rave of the moment also announced that he has signed under renowned music label Baseline Music – managed by Howie T, and Dipo Abdul.

To sign-up for a chance to win the amazing sum, fans only need to record themselves dancing to his hit single ‘Shake Body’, and upload it onto www.skalesmusic.com. The lucky winner of $10,000 US Dollars, will emerge via popular polls.  “It is a popularity contest, but I think it will be easy if people checked out the video for Shake Body before recording their own version. We intentionally shot the video that way to enable people steal some moves”, Howie T who manages Baseline Music says.

The ‘Shake Body’ lucky Fan competition will herald Skales’ new alliance withBaseline Music in a massive way. “Baseline understands the Skales Direction and this is why I decided to take this step,” Skales says. Under his self-owned OHK Entertainment, Skales made a game-changing breakthrough with the release of two singles in May: ‘Obi’ and ‘Shake Body’. Now the rave-of-the-moment is ready to take his career to an all-new level as he joins forces with the team at Baseline Music.

The video to Shake Body, which was initially released at the press event, was directed by Stanz Visuals in Lagos, Nigeria.

The Police contact after Chris Brown & Karrueche have an encounter

Is That True? Amosun rubbishing my legacy, says Daniel

NAIJ.com digest: Top 7 news that got Nigerians talking this Wednesday

Eclipse: Read the promise FCT police command has made to residents