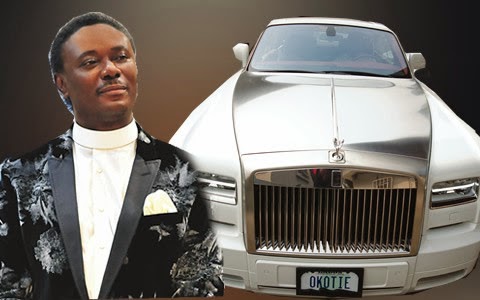 Article written by Florence Amagiya for Vanguard. I can’t figure out if she’s for or against him. Lol. You want to paint him as a great guy and you mention he has N400million fleet of cars and that he has other choice properties in the US worth millions of dollars? Lol. Read below..

Human beings are not naturally known to always give without thinking of what they would get in return. So it is worthy of note when a man gives so much without asking for anything in return.

Rev. Chris Okotie may not have a stunning personality to some Nigerians, but he has endeared himself to many particularly those who got a helping hand when it mattered to them. He shows love to all and occasionally dishes out different gift items.

Recently, on his birthday when others would sit back to welcome and collect birthday gifts in multitude; he chose to dedicate the day giving to people household items, satisfying the material needs of people. In this edition, we bring you an icon that is always ready to share…

No doubt, the ageless multi award winning pop Musician, Chris Okotie; now known as Rev. Chris Okotie is a very wealthy man; who loves seeing the faces of people light up whenever he gives.

He doesn’t need any introduction to Nigerians as his album ‘I need someone’ brought him to limelight in the 80′s. It would also be recalled that Pastor Chris left singing secular songs for gospel songs more than 30 years ago; after he repented.

Today, he writes gospel songs and he sings to worship God. It is also worthy of note that Rev. Chris is also a writer as he wrote the best selling book titled “The last outcast” which was a sell out. Pastor doesn’t have a choir in his church yet awesome songs are produced by him as the choir master and his church as his choir.

Rev. Chris was born on June 16, 1959. He is an Urhobo from Abraka in Ethiope East Local Government Area of Delta State. He is the founder and senior pastor of Household of God Church; a church located in Oregun, Ikeja, Lagos state since 1987. He is a law graduate from the University of Nigeria, Enugu campus.

PROPERTIES
The church auditorium, including the children’s department, the car parks and its extensive fallow land is worth billions of naira. He has other choice properties in the United State of America worth millions of dollars.

The church auditorium is a beautiful, large edifice, built to house more than 2000 people or more. Although, Household of God Church is not as crowded like people would have expected it to be, but they have the ability and movement of a batallion as Rev. Chris would always say that “God doesn’t work with the crowd, but with selected few who are ready to work in the his vineyard”.

INVESTMENTS
Rev. Chris Okotie believes strongly in investing in the lives of people; he is described by all who has made contact with him as an intense giver. He also believes that “God who has called him would take care of him”.

So he doesn’t believe in any investment except in the service of God and humanity. But even at that; he is arguably one of the richest pastors in Nigeria; as he collects very expensive wrist watches, wears expensive suits, ties, perfumes and shoes.

Rev.Chris spoke extensively on this very issue in one of his sermons. According to him ” working in line with God’s will and direction for my life has made me buy more expensive cars and wear more expensive clothes than most of my colleagues”.

CHARITY
Pastor Chris spends a lot of money on charity as he is enjoys giving. He jokingly told the church on one of such Sundays that he spends over two hundred and fifty thousand naira each Sunday buying gifts for people.

The Yuletide seasons are not left out as he spends millions through the church making Christmas season beautiful for the less privilege in the Society.

Pastor and the church has a yearly grace programme; on the programme they organise an award event known as Karis award for people who did amazing things in their field of specialty.

CARS
He is an unrepentant car freak; as his cars are estimated to be over N400m. He has cars such as BMW, to exotic models of Range Rover and Mercedes Benz. Recently, he added a Rolls Royce Phantom, 2014 edition to the fleet in his garagewhich cost him a whooping sum of N80m. That was to be a personal gift to celebrate his 27 years on the pulpit and 30 years as a born again Christian.

This is Bad! Dad kills his 5 young children and dumped them in bin bags at side of road

Yvonne Nelson Looking Cute at the Premiere of her New Movie