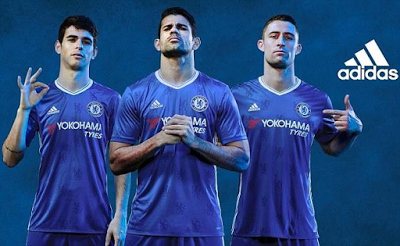 Sportswear giants Adidas have decided to end their sponsorship deal with Chelsea football club six years early due to the disastrous and sad season the club has endured this year.
According to reports, Chelsea initiated the termination talks but Adidas were also happy to terminate the deal and move to 'bigger clubs' as Chelsea had a terrible season, one not good for the Sportswear company's image.
Adidas has been the sponsor and sportswear supplier for Chelsea since 2006, but Chelsea will pay £40m termination fee to adidas after initiating the talks to end the deal as the club also feel they could get better money from sponsors, an irony given that they haven't had a good season.
Chelsea signed the £30m-a-year deal in June 2013 and were surprised when the company secured a £75m-a-year deal with Manchester United 12 months later. Chelsea believe they have been one of the world's most successful clubs and the current adidas deal did not reflect their market value.
A spokesperson at Adidas told Sky Sports News HQ

"Adidas AG wishes to expressly thank Chelsea Football Club for their always professional and successful collaboration, which has included, among other successes, the time of their UEFA Champions League title in 2012 as well as two Premier League titles."

"It's in line with our strategic business plan where we will sponsor fewer teams in the coming years".

Just days after their wedding, read what Lagos policeman told his wife about his wealth

Will Oscar Pistorius go to jail for killing Reeva? We'll find out shortly

Knocked Up Or Nah?? Kevin Hart Confirms Whether Or Not Fiancée Eniko Is Totin’ A Gut Full Of Grown Little Man