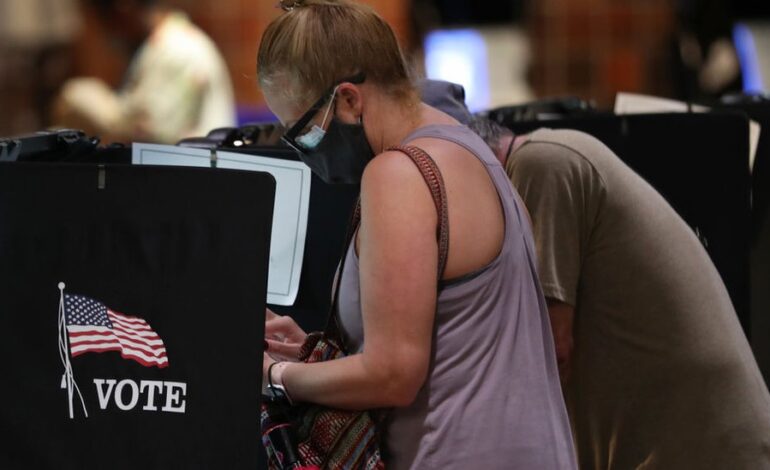 US national security officials say Iran was responsible for sending threatening emails to Democratic voters ahead of next month's presidential election.

The emails appeared to come from a far-right pro-Trump group and were meant to "incite unrest", National Intelligence Director John Ratcliffe said.

Both Iran and Russia denied the accusations of election interference.

"As we have said before, it makes no difference for Iran who wins the US election," he added.

Kremlin spokesman Dmitry Peskov told the BBC: "We think this is unfortunate. These accusations come every day, they are all completely groundless, they are based on nothing."

"They are most likely some sort of internal political process connected with the upcoming elections."

Mr Ratcliffe's decision to hold a briefing so close to the presidential election was seen as a testament to the government's concerns over voting interference and disinformation campaigns from foreign actors.

He added that the voter data could be used in attempts to "communicate false information to registered voters that they hope will sow confusion chaos and undermine your confidence in American democracy".

Mr Ratcliffe said officials "have not seen the same actions from Russia", but are aware they have some voter information.

In many states, voter data is available upon request, though each state has different requirements on who can request voter information, what data is available and how this data might be used, according to the National Conference of State Legislatures.

"If you receive an intimidating or manipulative email in your inbox, don't be alarmed and do not spread it," Mr Ratcliffe said, calling the actions to influence US voters "desperate attempts by desperate adversaries".

This announcement inevitably has shades of the 2016 Russian interference in the US election.

In that election thousands of fake bots were created on social media pretending to be American voters.

From this announcement, though, it's unclear how Iran and Russia obtained the information – and exactly what info they have.

You only have to look at your spam filter to see that many people have your email address.

The main charge against Iran is it has sent "spoof emails" to voters in swing states. If true, this is unlikely to be a sophisticated attack.

In many states too, voter registration information is publicly available.

And nowhere in the announcement was there any further information about how widescale the emails have been.

FBI Director Christopher Wray joined Mr Ratcliffe at the news conference. He said that US election systems were still secure and "resilient".

"You should be confident that your vote counts," Mr Wray said. "Early, unverified claims to the contrary should be viewed with a healthy dose of scepticism."

The officials did not offer further details on how the voter data was obtained or what the Russians may be doing with the information.

US intelligence agencies concluded in 2016 that Kremlin-backed hackers were behind an effort to undermine Hillary Clinton's presidential run, using both cyber attacks and fake news stories planted on social media.

Iran has not managed to successfully hack US systems.

The emails in question were addressed to registered Democratic voters in several states, including the key battleground of Florida, and urged them to vote for Mr Trump – or else.

"You will vote for Trump on Election Day or we will come after you," the emails said, according to US media.

"Change your party affiliation to Republican to let us know you received our message and will comply."

As of Wednesday, over 40 million Americans have cast early votes in the presidential contest between Mr Trump and Democrat Joe Biden.

Alleged Hacking into US Central Command Accounts by ISIS

Why Was Diezani Denied Conversation With Buhari Throughout Their London Trip?