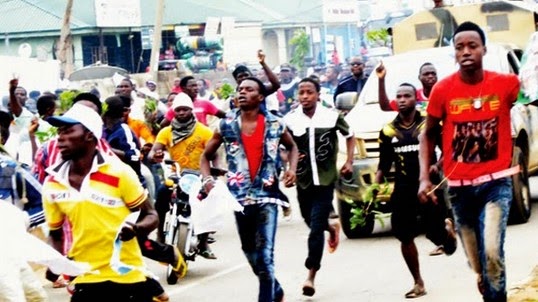 Three people have died while one person was serious wounded during clashes between Gwandara and Eggon youths who were protesting over the commencement of impeachment proceedings against Governor Umaru Tanko Al-Makura of Nasarawa State on Thursday.

Leadership gathered that some armed Gwandara youths stormed the house of an Eggon man around Old Alamis Market and set it ablaze along with his car. Many governorship posters of information minister Labaran Maku were said to have been pasted on the walls of the house.

The state police public relations officer, Ismaila Numan, confirmed the development, saying the house was burnt in the early hours of the day but he could not confirm who was responsible.

Investigations has however revealed that…

The impeachment notice served on the governor by the PDP-controlled state lawmakers did not go down well with the Gwandara youths who resorted to violent protests to register their anger over the attempt to impeach their kinsman to pave way for an Eggon man to take over the leadership of the state.
One of the warring youths was seen with a very deep machete cut in the upper arm as he was being taken to the hospital for medication.

The Gwandara are said to be accusing the Eggon elite of being behind the woes of the governor, leading to the impeachment process by the state legislators.

Maku, the information minister, is of the Eggon extraction whereas Governor Al-Makura is of Gwandara ethnic stock; the latter are considered one of the smallest ethnic nationalities in the state.

When Leadership visited the scene of the violence, burnt-down commercial tricycles littered the area even as shops and other business premises hurriedly closed for fear of being vandalized.

Presidency behind my travails – Gov. Al-Makura
Governor Umoru Tanko Al-Makura of Nasarawa State has attributed his present travails to the Presidency. The governor made the disclosure through his senior special assistant on public affairs, Abdulhamid Yakubu Kwarra, while fielding questions from journalists in Jos, the Plateau State capital, on Thursday.

According to him, this development is meant to destabilize APC-controlled states in the country.

Mr Kwarra said: “They are threatened by the monumental achievements of the APC administration in Nasarawa State; there is no administration that is as corrupt as the present PDP-led government in the country.

“Authorities in Abuja should stop the bull from entering a china shop. They are opening a new war front; they should address the issue of the insecurity and Chibok girls instead of chasing shadows in the country.”

He stressed that they were exploring all the options available to them, pointing out that a situation where some members of the State House of Assembly exercise their power without decorum will be highly resisted.

18 Ways you can identify a good partner