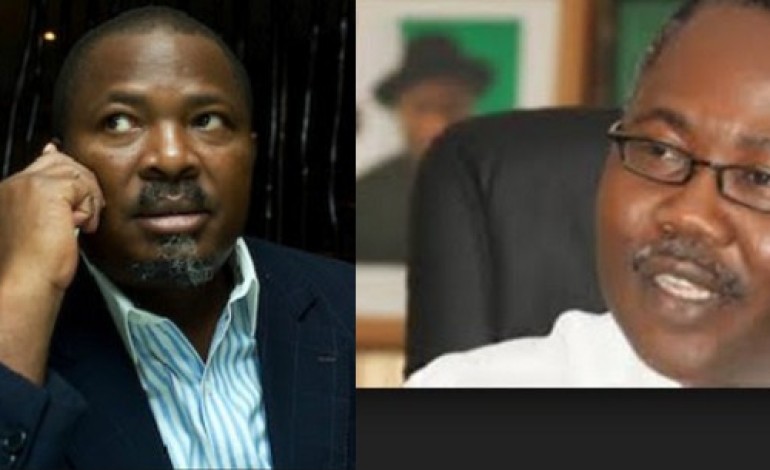 President Muhammadu Buhari -led government is set to declare some top officials of the Goodluck Jonathan’s administration wanted, in connection with some new and ongoing corruption revelations.
Security sources who are aware of the plans revealed that the first list of wanted ex-officials and military officers, who anti-graft investigators believe fled the country to evade arrest and prosecution over corruption, has been compiled and ready for release.
Below are full details of the “big men” to be declared wanted…
Former Minister of Justice and Attorney General of the Federation, Mohammed Bello Adoke. Sources in the EFCC told Premium Times that he is wanted in connection with the $1.1billion Malabu Oil deal.
Adoke is believed to be in Dubai. He is required to answer questions about his role in facilitating the transfer of the huge sum, paid by oil giants Royal Dutch Shell and Eni, to accounts operated by a former petroleum minister and convicted felon, Dan Etete.
Also on the list is the publisher of ThisDay Newspaper, Nduka Obaigbena. He would be declared wanted for receiving N670million from former National Security Adviser, Sambo Dasuki.
Obaigbena claimed, in his letter to EFCC that part of the money was meant for compensation for Boko Haram attacks on his offices in Abuja and Kaduna, while another N120million was on behalf of the Newspaper Proprietors Association of Nigeria and 12 newspapers who asked to be compensated for the “unlawful seizure and stoppage of circulation by armed soldiers in Abuja and several cities”.
Some of the newspapers have denied receiving money from the newspaper body, NPAN, while others have returned the money they were paid to the association after it was revealed that the payment was made from the alleged missing N2.1billion meant for the procurement of arms to fight Boko Haram.
The whereabouts of Obaigbena is not known, but it is hoped that he would be arrested wherever he is as soon as his name is published, and be extradited to Nigeria to face trial.
Others on the list included ex-Comptroller of the Nigerian Customs Service, Abdullahi Dikko, who is being investigated for fraud, and a former chairman of the Pension Reform Task Team, Abdulrasheed Maina, who is wanted for alleged stealing N2.8 billion. Both men are believed to be hiding in Dubai.
Our sources say two senior military officers, Sarki Yarki-Bello, a General and Bello Fadile, a Colonel, who worked in the office of the national Security Adviser under Dasuki, are also on the list.
Mr. Sarki was the Director of Counter-terrorism at the ONSA while Mr. Fadile is described as a close confidant of former National Security Adviser, Sambo Dasuki.
Last July, Fadile was arrested in company of Dasuki when SSS operatives stormed his home in Abuja.
Also, Sarki and Fadile are believed to be hiding in Dubai. Buhari
Another big name on the list of wanted ex-officials is Waripamowei Dudafa, a former Special Assistant to ex-President Jonathan on Domestic and Social Events.
No wonder President Buhari went to Dubai to sign all those documents to get cooperation from UAE.
On Tuesday, President Buhari signed a series of bilateral agreements with the government of the UAE, among them are the Judicial Agreement on Extradition, Transfer of Sentenced Persons and Mutual Legal Assistance on Criminal and Commercial Matters, which are intended to help in extradition of officials wanted for fraud and other criminal activities and the repatriation of looted funds.
Sources say many looters are hiding in Dubai because there was no agreement with Nigeria before to send wanted persons back home. President Buhari got to know their tricks and started work immediately!
Read More

Hilarious! See what this teacher gave his best student (photo)