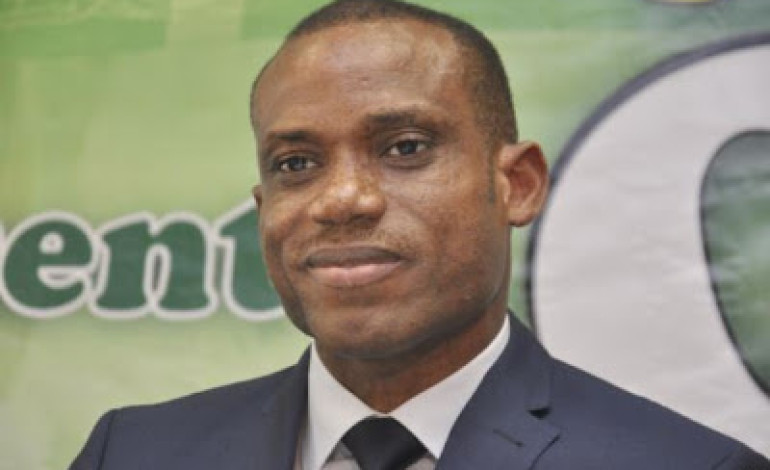 This rejoinder was written by sports journalist, Aderonke Bello. Read below…
“I have to play Sunday Oliseh’s rant over and again at the mercy of my precious megabyte and all I could mutter to myself was, what has gotten over this disorientated opportuned coach? You know he said his critics are insane, but for real, no one looks as insane and inept as he does in that video, plus he has obviously lost his mind and carried away with the euphoria of the job. Is it safe to say that Oliseh was high on some aphrodisiac when he was ranting.
That said, I am a renowned critic of this coach who is suffering from mouth diarrhoea, not because he was unqualified to hold such a big post but also because he was always easy to criticise others from the armchair as a pundit as I said in one of my articles ‘Enu dun rofo’. I pointedly said to him directly to his face after he criticised Siasia at a media parley in Abuja that only time will tell.

He said and I quote: “This is a family affair, I will not go to the public to say anything against my employer we will settle it in house……” and I replied openly “Coach time will tell” he looked at my side and said “Sis Sis please” and I kept quiet. Time has surely caught up on him, according to the old adage, ‘Time is the father of all truth’.

I never for once believed in his capability of doing us any good on and off the pitch as he once claimed to be a consultant. How can?

Don’t get me wrong though, growing up as a young girl and a tomboy, he was one of those players that I Idolised, I used to call myself Oliseh and Amokachi when I played football as a young girl – back in the days. But I am no fan of his as a coach.

Oliseh I am your critic and I am not insane, you are insane – infact you are deluded. I do not blame you but the desperate NFF who employed you without any due process or worthy experience because they were bent on reprisals of chasing Stephen Keshi away.

Oh! how I miss the trophy winning team coached by Stephen Keshi and Daniel Amokachi. At least they won Bronze at CHAN despite our poor league status but Oliseh can not even make it out of the group, he is still lamenting.

Oliseh is so lousy, all he knows how to do is cause chaos, as I remember though I was young, he insulted a sports minister, football officials and now Journalists calling them INSANE! First of all you should expect criticism if you are a leader, you cannot satisfy everyone. Even with results, Keshi was criticized and eventually sacked – what have you won with your almighty coaching certificate – Nothing!.

You criticised Keshi for years and he never called you insane, so why are you abusing people? You even abused your employers.

Because of you, Emmanuel Emenike and Vincent Enyeama retired, what kind of manager are you?, and to put it quite bluntly, what kind of a MAN are you? These two players are the ones I only get to see in camp with no involvement in any cabal on and of the pitch, but like for real you practically chased them away, yes you did Oliseh!

Why draw so much controversies in little time despite your ‘just 14 matches’ like you said, if only talk win matches you could have won them all Oliseh.

Imagine you taking a swipe at your former colleagues, I really don’t want to mention names here but I have engaged some of them and they hold you so dear and highly with well wishes. These same set of people are the ones you castigated.

However, every previous Nigerian Coach at one point or the other failed to comprehend the enormity of the nation’s passion for football and even had issues with the administrators, but on this one you went way too far. You arrogantly said a TOP GOVERNMENT official begged you before you could take the job, this so-called official must be so clueless that there is something called due process which the NFF ignored.

And they negotiated and signed you up in London, refering to you as the African Guardiola – what an insult to Pep. I see why you do not even stay in the country and watch league players. bewitched by witchcrafts apparently, lol.

Let me tell you about witchcraft; it is when you snitch on your neighbours and people close to you, and also when you laugh with people to their faces and pull them down behind their back, that is witchcraft.

Mr Oliseh, your team is sick, look for a cure and get it well. Nigerians want[ results and not grammar, it doesn’t win football laurels.

So as it is now, the NFF will have to cough out N140m to you if they get you sacked, according to your proclamation, Dream On! You must surely have annulled any contractual compensation that may be due in case of your inevitable sack, through your moment of madness rantings and ill advised utterances.

I want to conclude by saying this, you will be a coward and must be insane if you don’t mention those journalists that you accused of asking you for bribe.

Oliseh I am calling you out on behalf of the 170m Nigerians, just apologise to us or resign, probably walk back to the TV and continue your verbal coaching ‘Enu dun rofo’

lmao... Singer Tyrese Calls Out Lady who Googled his Net Worth before Hanging Out with Him

California to honor advocate for victims of 'sexual slavery' during World War II, who died this week at age 93

Beyoncé spends £200k on a pair of diamond-encrusted stilettos

Chris Brown to Ray Rice: 'I've been down that road'

Welcome to 2015: The Year of Triumph And Happy New Year!

Meet the man who took over Tiwa Savage Husband's Position