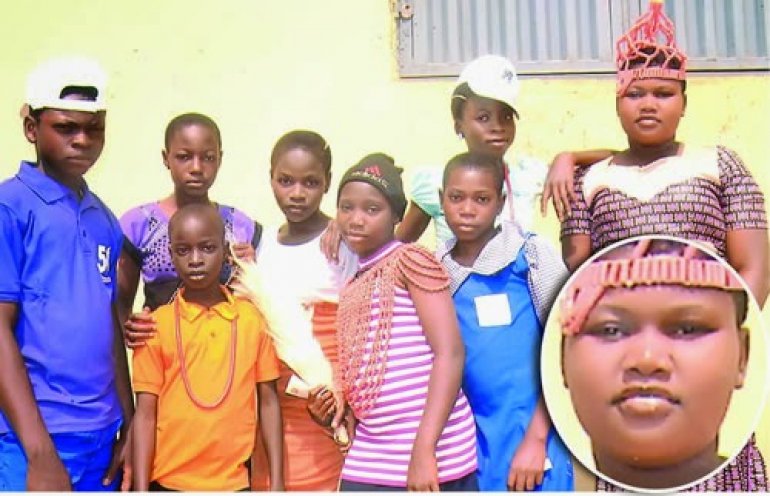 Before January 29, 2015, the girl’s eyes could be said to be perfect, going by the picture she took with her friends the same month when the school celebrated its 50th anniversary. But the tide changed against Iyanu and it seems she has lost an eye.

Sunday Tribune gathered that the event that led to the change in Iyanu’s life started when she was allegedly slapped by one Mrs Funke Fashina, said to be the secretary to the principal of the school. And what was her offence? The woman reportedly saw her and two other girls emerging from an unused room within the school building and enquired to know what they were doing there. Before they could reply, she landed a slap on Iyanu’s face first, and subsequently others.

The girl’s right eye was said to have developed a problem and had got worse, with the University College Hospital, Ibadan (UCH), saying that she would require a surgery. Iyanu told Sunday Tribune that she could no longer see with the right eye.

“On Thursday, January 29, students were having an Agriculture class, so those of us offering Food and Nutrition left the class and three of us went to stay in one of the rooms in the building.
“We saw our teacher from the window of the room so we wanted to step out to go and meet her. As we were about to leave the room, we saw the secretary to the Principal, Mrs Funke Fasina. She asked us what we were doing in that room but before we could explain, she slapped us one after the other.
“By the time I got home, my left eye had turned red and painful. I told my mother what happened but she dismissed me, saying that I would not have been slapped if I didn’t do something wrong. On Monday February 9, my mother followed me to school and the principal asked my mother to take me to the hospital.
“We went to Catholic Hospital, Eleta, Ibadan and we were told to do the scan of the eye. By then, my eye had become bulgy and I was no longer seeing clearly. We went to St. Gregory’s Ultrasound Centre, Yemetu. From there, we went to the University College Hospital, Ibadan and I was told that I would undergo surgery. We were told to bring N300,000 as deposit. My parents have reported the case at the police station in Alakia Adelubi and the woman admitted that she slapped me.”

Iyanuoluwa said before the slap, she never had any pain or itch in her eye, so the report that she had a problem with her eye does not hold water. “Now I can no longer see with my right eye and I am going through a lot of pains,” she stated.

“To my surprise, the eye started swelling up. I followed my daughter to school on Monday, February 9 and the principal was shocked to see the eye.
“We went to Mrs Fashina and I begged her to give us an antidote if she used a charm on my daughter but she denied using charm to slap my daughter. My daughter never had any eye problem since she was born.
“We took Iyanuoluwa to UCH and we were told that she would go through surgery. We did CT scan at UCH but the result was cornered and we never saw it. We were told to go home when we could not pay the N300,000 we were asked to deposit.

“Unfortunately, the woman who slapped my daughter refused to do anything financially and my brother who went to the Commissioner for Education was told that efforts were on to go round schools for students to contribute money towards my daughter’s treatment.”

Sunkanmi Ojewumi, Iyanu’s uncle, decried the attitude of a staff of UCH (names withheld), whom he said tried to frustrate all their efforts because she is Mrs Fashina’s in-law.

“We didn’t get the result of the test carried out in UCH and the police at Alakia-Adelubi did not get it also. To our surprise, the result found its way to TESCOM where the Permanent Secretary at the Ministry of Education, Mr. Giwa, told me he had seen the result and it indicated that the girl might have had underlying problems that resulted in the eye problem.
“He said the only way they could help was to go round schools and seek donations from students, which TESCOM would add to. It was claimed that she had a tumor in the eye. But we will not accept the result because the girl never had eye problem.
“We appeal to the government to come to the girl’s aid. We don’t have any money and the father’s shop at Oki area of Ibadan was razed recently and he lost goods worth millions of naira. The mother sells provisions.”

Sunday Tribune gathered that the case was eventually transferred to the Department of Criminal Investigation, Iyaganku and was arraigned to court on Monday, March 9 for wounding. This was confirmed by the police’s spokesperson in Oyo State, DSP Adekunle Ajisebutu.