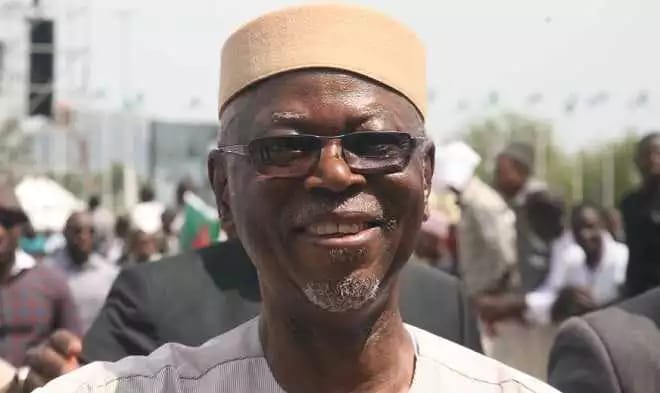 – He declared the PDP dead in Edo state

Chief John Odegie-Oyegun has declared that the Peoples Democratic Party (PDP) is dead following the mass defection members of the party to the All Progressives Congress (APC).

Vanguard reports that Oyegun made this comment when he received more than 3000 PDP leaders into the APC in Oredo local government area in Edo state.

The chairman of the APC said the party was still ready to accommodate as many PDP members who were interested in leaving.

“Massive development has already started in the state, and we welcome people who have the interest of the state and are progressive minded to join to continue with this development. Looking at the calibre of leaders defecting, I laugh when I see PDP boast of winning. Honestly, they are dead and buried in Edo.”

Governor Adams Oshiomhole of Edo also confirmed that the PDP was now irrelevant in the state and it was impossible for the party to win.

He said: “The defection of Dennis Evbuomwan, the Oredo PDP leader, marked the end of the party in the state. For me, the coming of Evbuomwan, and other leaders of the PDP in Oredo, along with their unit leaders, means they are here with a complete story. The unit heads are the real people in the field.

A few weeks ago, Alhaji Abubakar Momoh led thousands of members of the Social Democratic Party (SDP) to the PDP.

Momoh who was the senatorial candidate of SDP in the last general election in Edo North led mem­bers and supporters to resign en-masse from the party to join the PDP at a campaign rally held at Royal block Court­yard at Auchi in Etsako West Local Government Area of the state. “We decided to join the PDP because it has a candidate that will help Edo State get out of where it is today which is not comfortable. That candidate is a person who I believe will help to move Edo forward.” Original Article

Muslim Youths Show Christians Love, Protect Them Against Attack During Christmas Service, Because Will Worship One God!

Unmasked: The baby-faced schoolboy, 15, who stabbed teacher Ann Maguire to death in her classroom as judge sentences him to 20 years and warns him he may die in prison