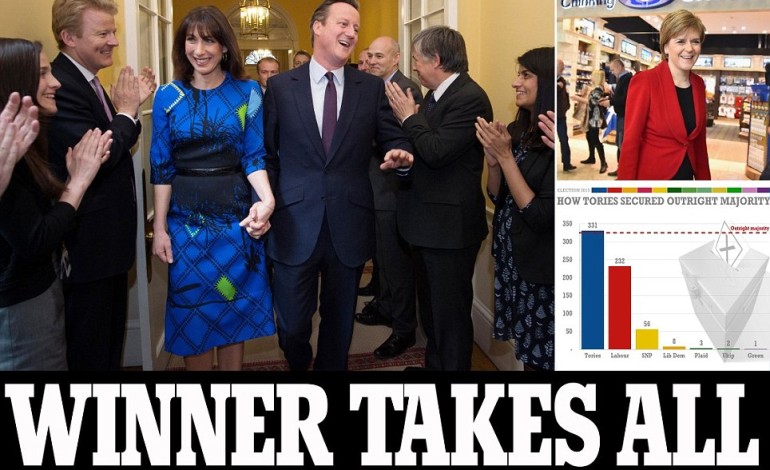 David Cameron today vowed to make Great Britain ‘greater still’ as he set out how he will use his shock outright Tory majority to ensure the ‘good life is in reach for everyone who’s willing to work and do the right thing’.

The Prime Minister used a statement outside Number 10 to pay tribute to both Labour’s Ed Miliband and his former Lib Dem deputy Nick Clegg who have both resigned after suffering heavy losses in one of the most unpredictable election results for a generation.

The three political leaders then emerged, barely an hour later, to stand side by side at the Cenotaph to commemorate the 70th anniversary of VE Day.

Mr Cameron had earlier walked out the doors of Number 10 to declare he was forming a majority Tory government after routing Labour and the Lib Dems in the biggest electoral shock in living memory.

The PM returned to Downing Street with his wife Samantha after making the short trip to Buckingham Palace for a meeting with the Queen to confirm what he described as the ‘sweetest victory of all’.

In an incredible night of political drama, Labour suffered a bloodbath in Scotland and failed to make any gains in England. Mr Miliband said he accepted ‘absolute and total responsibility’ for the electoral disaster, and resigned with immediate effect. His deputy Harriet Harman also announced she will stand aside.

Mr Clegg, who was left as just one of eight MPs to survive the near-destruction of the Lib Dems, also resigned – admitting he had led the party to its worst ever defeat.

It came after Ukip’s Nigel Farage threw in the towel within minutes of receiving confirmation that he had lost his bid to enter Parliament. But in a surprise announcement Mr Farage suggested he could return as party leader in the Autumn.

Mr Cameron said he would use the 331 MPs he will have in the Commons to implement the Tory manifesto in full, promising more apprenticeships, income tax cuts and an in-out referendum on Britain’s membership of the EU.

But he also signaled that he would sign off a massive devolution of powers to Scotland, after Nicola Sturgeon’s SNP stunned everyone to win 56 of 59 seats in Scotland. 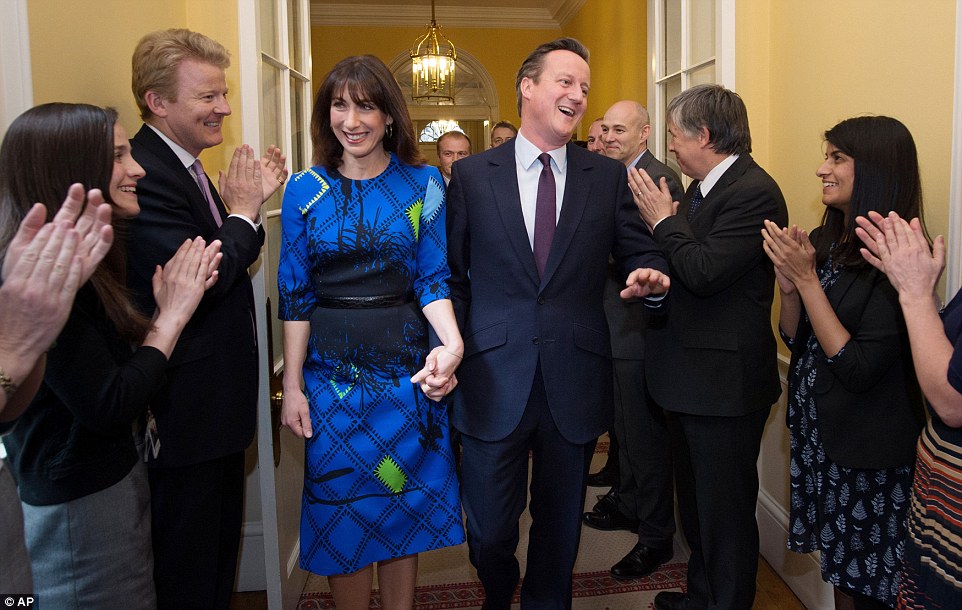 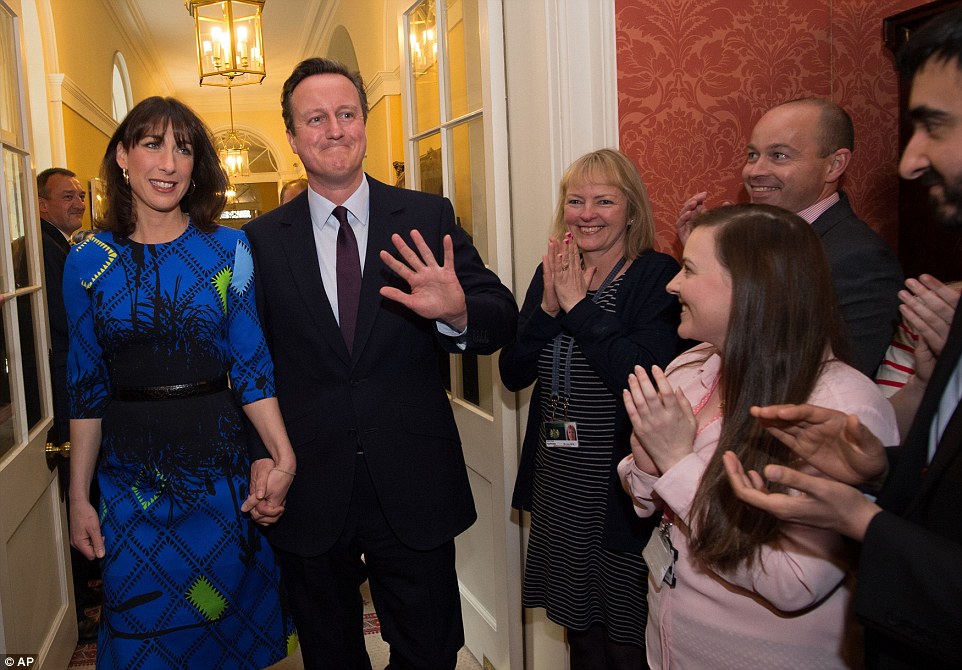 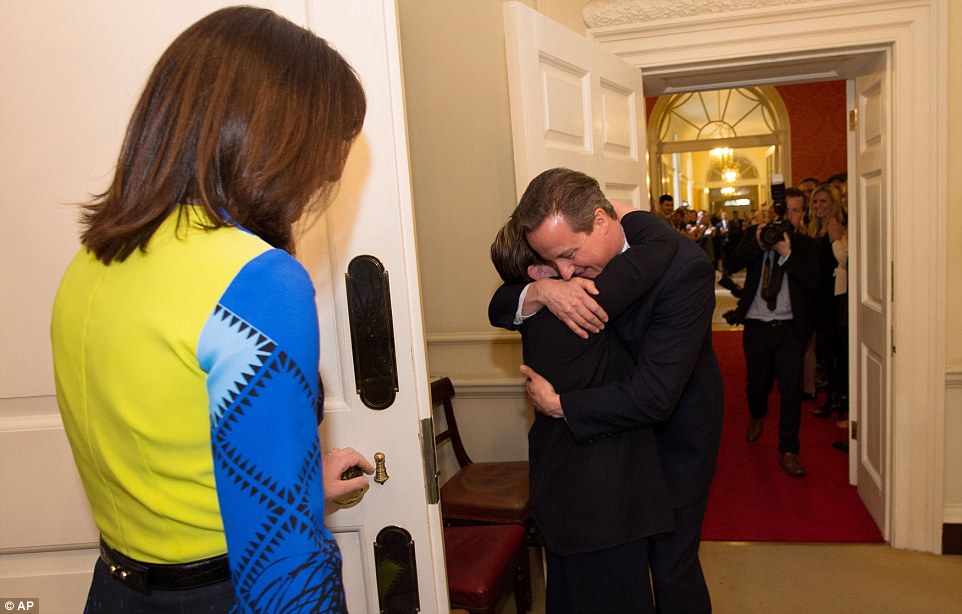 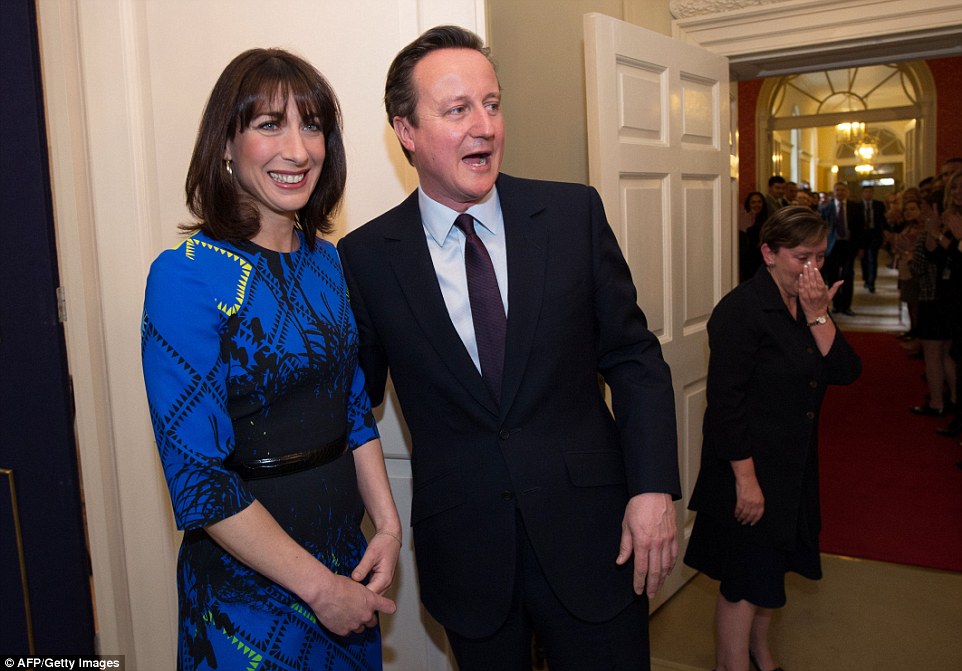 Senior Conservatives could not contain their delight as the results rolled in. In an extraordinary 24 hours of political drama:

With the world’s media gathered in Downing Street, a visibly relieved Mr Cameron said he wanted to finish the job of fixing Britain’s economy.

The Prime Minister said: ‘When I stood here five years ago – our country was in the grip of an economic crisis. Five years on Britain is so much stronger.

‘But the real opportunities lie ahead. Everything I’ve seen over the last five years and indeed over this election campaign has proved once again that this is a country with unrivalled skills and creativeness. A country with such good humour and such great compassion.

‘I’m convinced that if we can draw on all of this, then we can take these islands with our proud history and build an even prouder future – together we can make Great Britain greater still.’ 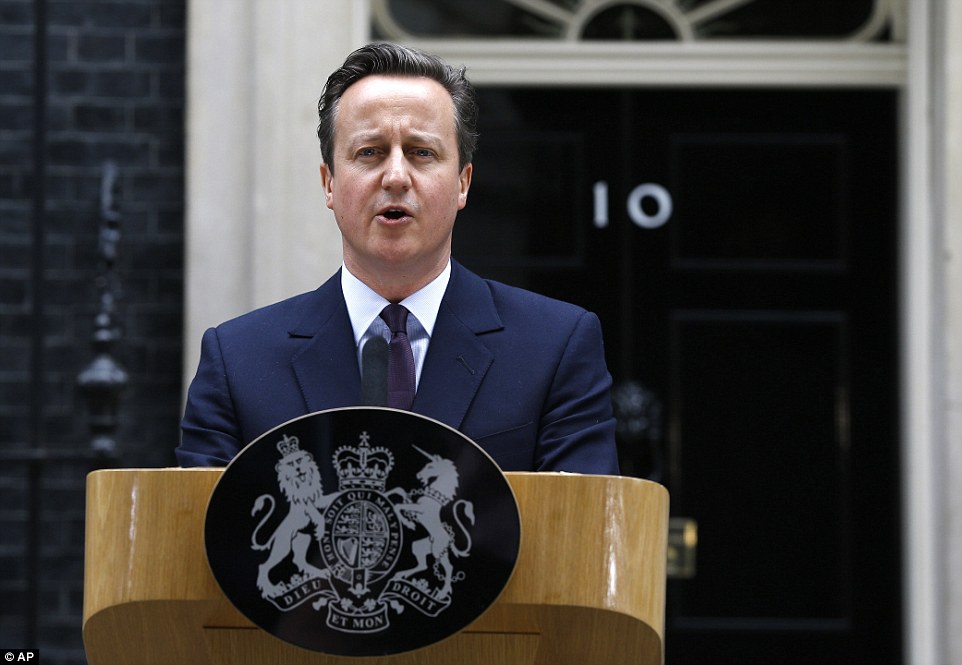 Victory: David Cameron addresses the nation from outside Number 10 after meeting the Queen to confirm he has secured an overall majority, which few pollsters, commentators or even Tories thought was possible 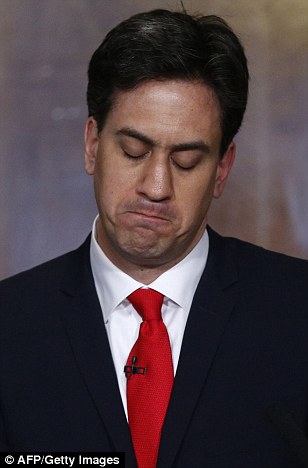 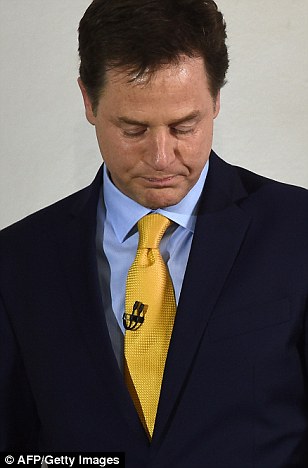 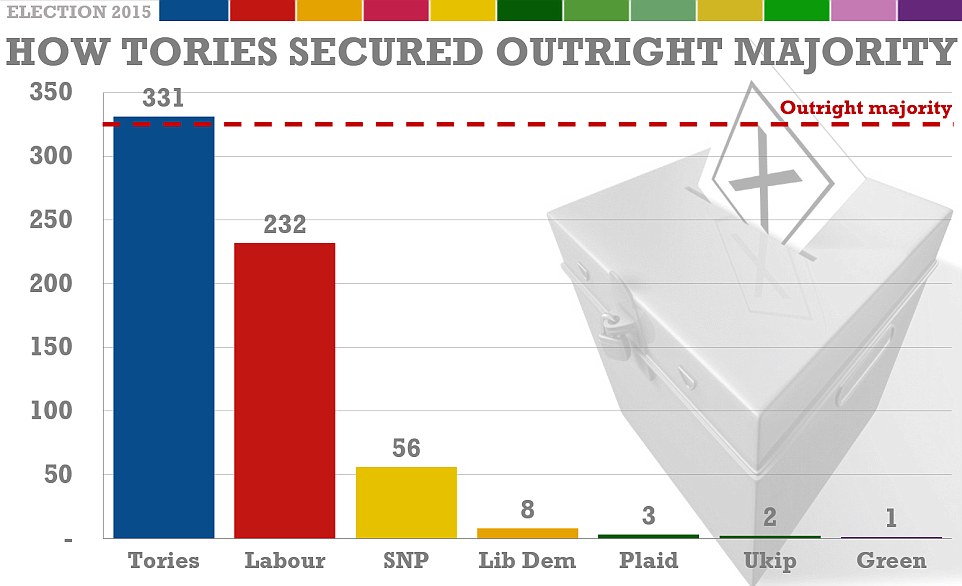 The Conservatives stunned their political opponents to win 331 seats, securing the outright majority which eluded Mr Cameron in 2010

Mr Cameron was in his ministerial car making the short trip from Downing Street to the Palace at 12.30pm, when news through that the Tories had officially secured the 326 seats needed for an outright majority.

Just minutes earlier a dejected Mr Miliband told supporters at the party’s HQ that he was to blame for the defeat but insisted he had fought the right campaign.

He said: ‘I believe Britain needed a Labour government and I still do, but the public decided otherwise. Now it’s time for someone else to take leadership of this party. So I am tendering my resignation.’

Mr Miliband quit with the final results still to be called – but the Tories on course to win 331 seats, giving them a surprise five-seat majority.

Labour is expected to finish with just 232 MPs, down 24, in its worst result since Neil Kinnock lost to Margaret Thatcher in 1987. The Lib Dems finished with just eight seats in its worst ever electoral defeat.

Mr Clegg, who spent five years as Deputy Prime Minister, admitted it had been a ‘cruel and punishing night’ for the Lib Dems.

Mr Cameron used his speech to pay warm tribute to his two rivals with whom he has traded blows in a fraught, and often deeply personal election campaign.

He said: ‘I have just been to see Her Majesty the Queen and I will now form a majority Conservative government. I’ve been proud to lead the first Coalition government in 70 years and I want to thank all those who worked so hard to make it a success. And in particular on this day, Nick Clegg.

‘Elections can be bruising clashes of ideas and arguments and a lot of people who believe profoundly in public service have seen that service cut short.

‘Ed Miliband rang me this morning to wish me luck with the new government. It was a typically generous gesture from someone who is clearly in public service for all the right reasons.’ 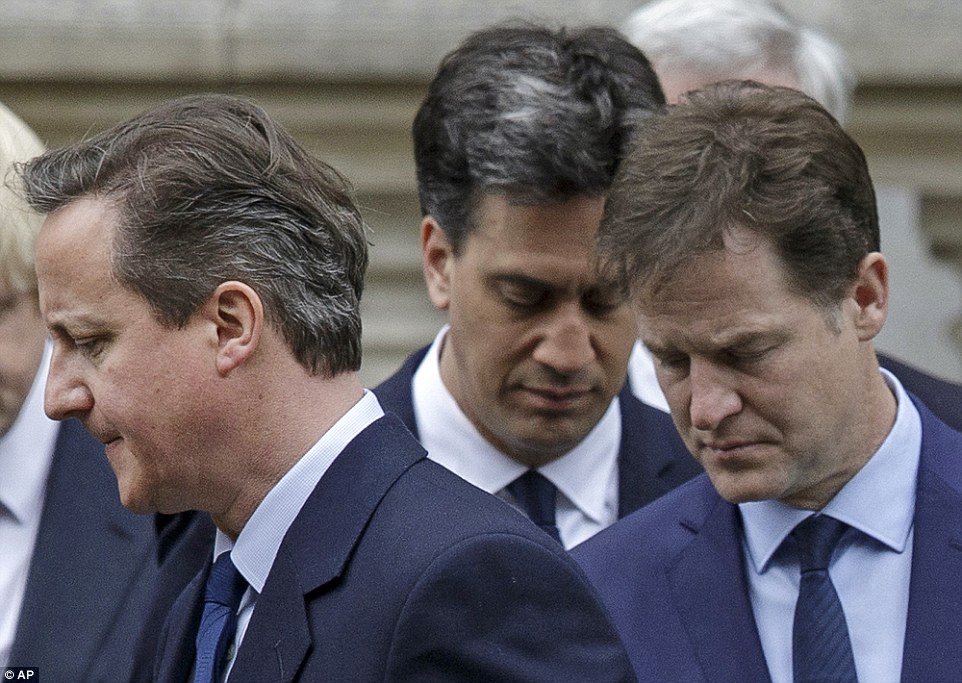 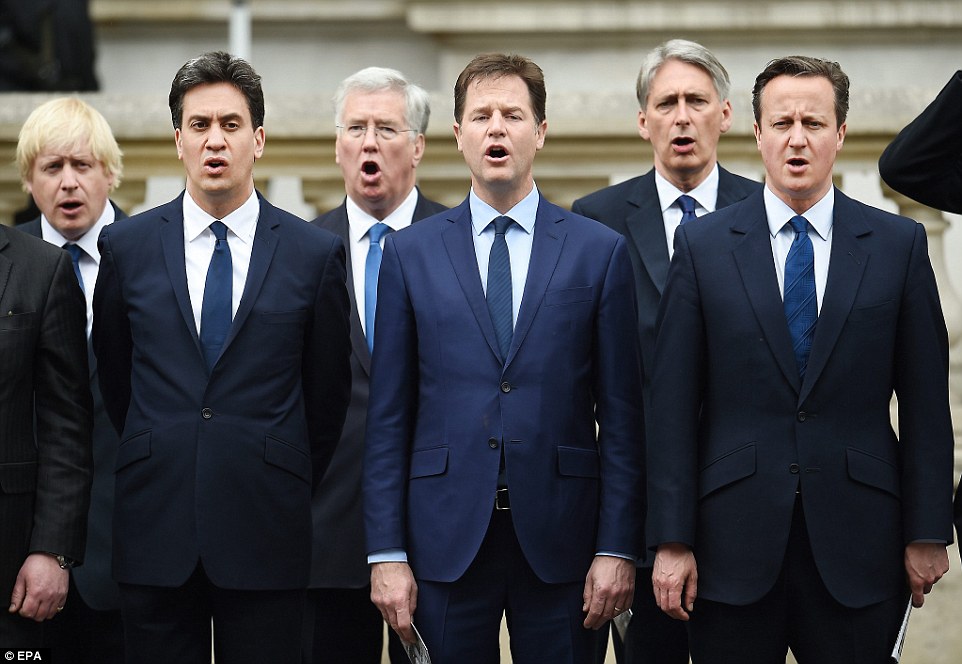 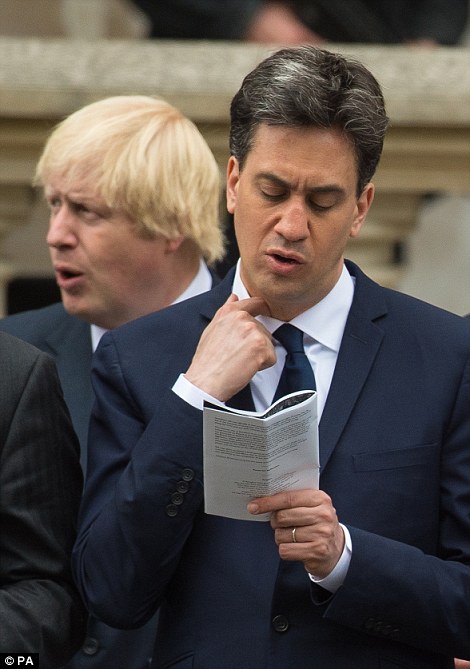 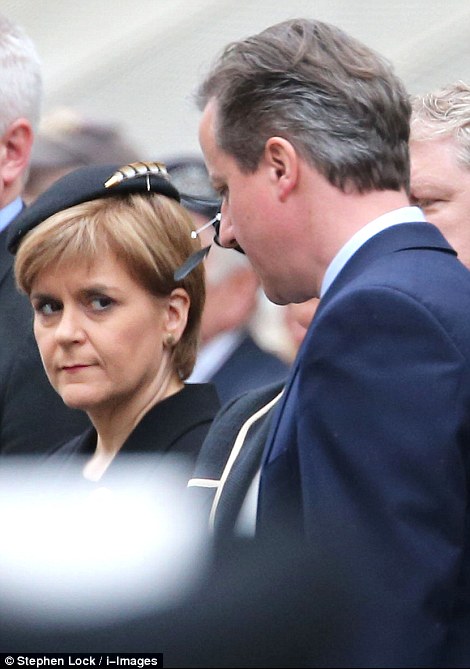 After a bruising general election, Britain’s main political leaders came together to commemorate victory in the Second World War, including Nicola Sturgeon (right)

Nemesis: Kim Kardashian Fears Kanye May Start Cheating On Her With Amber Rose

Europa League: Man Utd to face Liverpool in round of 16

B00bs Alert: What Is This Naija Babe Doing On Her Bed?