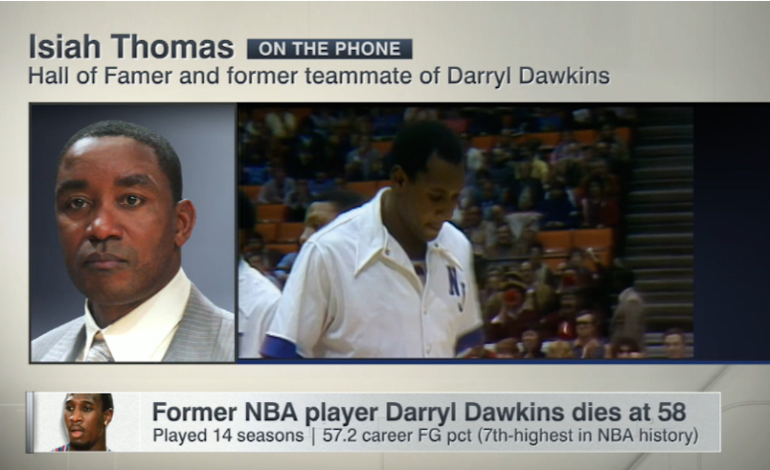 To anyone who ever knew Darryl Dawkins even a little, the news that he passed away Thursday morning from a heart attack felt as incredulous as the fact he was suddenly gone at just 58 years of age. Dawkins was such a sweet man, his heart was the last thing you’d expect to give out on him.

But then, most of Dawkins’ life played out against expectations. He was known for his imposing 6-foot-11, 275-pound build when the Philadelphia 76ers drafted him with the No. 5 overall pick in the 1975 draft, making him the first player to go straight from high school to the NBA, a year after Moses Malone made the same jump to the ABA. Yet the great irony of his career is he’s remembered most for his mind and his vivid imagination. Which is exactly how he wanted it.

Dawkins once told me near the end of his career in Detroit that people didn’t think he should get injured or stopped on-court because he was so big and strong, but “I just wanted to be treated like a human being, you know?”

“In Jersey when I was doing it [playing basketball] right, they loved me, and when I was hurt, they hated me,” Darryl Dawkins added. “When I was doing it right in Philly, they loved me. When I broke my leg or got hurt and couldn’t play, they hated me. It was always, ‘You ain’t human. You can’t get hurt.’ … If I get 20 points and 10 rebounds, there’s still people who think I should’ve had 28 points. There’s people that want to bother you, drive you crazy, break your spirit. I’ve always been damned if I do and damned if I don’t.”

So humor became Dawkins’ best armor, not his stats. His career averages of 12.0 points, 6.1 rebounds and 1.4 blocks a game in the 14 NBA seasons he spent with the 76ers, Nets, Jazz and Pistons are unremarkable. (He also played in Italy and did a stint with the Harlem Globetrotters.) But he did carve out a reputation as the funniest man in basketball. Maybe ever.

Dawkins liked to tell a story about how the grandmother, who helped raise him in Orlando after his father “cut out” for New York City, warned him early in life about his florid stories, telling him: “You’ve got to be careful, son. You’re gonna say stuff nobody understands. … You’ve got to bring it out a little at a time, like a dam letting out water. Not all at once.'”

It was our great fortune that Dawkins didn’t listen.

Dawkins loved to tell jokes about stuff like the girlfriend he once had who was so skinny, “I had to tie knots in her legs just so she’d have knees.”

He claimed to be an alien from the planet Lovetron, and went by nicknames such as “Chocolate Thunder” and “Sir Slam.” He signed his first pro contract wearing a bright red suit and a top hat and remained such a colorful dresser throughout his career that former teammate World B. Free, no wallflower himself, said Dawkins glowed in the dark. Another 76ers teammate, Doug Collins, says he tried to take Dawkins under his wing after Dawkins made his groundbreaking jump from high school to the NBA.

If Dawkins found it difficult, says Collins, he rarely let on.

“The world could be crashing down around him, and there was never a day when I didn’t see him with a smile on his face,” Collins said in a phone interview Thursday. “He used to call me Paul Douglas, because that’s my full name — Paul Douglas Collins. And I’d call him Double Stick of Dynamite or D Double D. He was so talented. The game came so easy to him. Maybe too easy. I can’t even imagine how big he’d be if he came along today in this age of social media and top 10 highlights.”

“The world could be crashing down around him, and there was never a day when I didn’t see him with a smile on his face.”

Laughing now, Collins tells a story of sitting next to Dawkins in the locker room in Portland the season the 76ers and Blazers played for the 1977 NBA title and listening in as a sneaker company rep bent Dawkins’ ear about how his company was willing to pay Dawkins double if he’d switch to their brand.

“Well, when the guy said how much more they’d pay him,” Collins recalled, “Darryl looked at me and said, ‘Paul Douglas, these old sneakers I have on are killing my feet! I am going to have to get rid of them, just throw ’em in the trash.’ And I said, ‘Darryl, you can’t do that! We’re in the NBA Finals!'”

Dawkins stopped. Thought it over. Then came up with this Solomon-like solution: He took the court wearing one shoe from the new sneaker company that was chasing him and one from the first company he’d signed with.

“Yes he did,” Collins said with a laugh. “He had the heart of a young child.”

Collins thinks having to break in on a Sixers team that had veterans Julius Erving, Mo Cheeks, George McGinnis, Bobby Jones and Caldwell Jones probably affected Dawkins’ ability to show all he could do in the NBA.

“His talent never really got a chance to shine with us,” Collins said. “We went from 9-73 to a team that all of a sudden was starting four All-Stars and contending for the NBA title after he arrived. He was the first to do what he was doing. And I think he deferred at times.”

Dawkins did make a huge mark when his dunks broke two glass backboards in a three-week span in 1979. He famously nicknamed the dunk that left the closest witness, Kansas City’s Bill Robinzine, having to have his hair checked for glass, the “If You Ain’t Groovin’ Best Get Movin’, Chocolate Thunder Flyin’, Robinzine Cryin’, Teeth Shakin’, Glass Breakin’, Rump Roastin’, Bun Toastin’, Glass Still Flyin’, Wham Bam I Am Jam!”

The next season, the NBA switched to breakaway rims.

“It was just insane that he broke the backboard because that was a new phenomenon, somebody breaking a backboard — it just didn’t happen,” Cheeks, now an assistant coach for the Oklahoma Thunder, said Thursday. “He used to tease me all the time, because when I got there, obviously Julius, Doc, was there, and we’d be on the break and we’d be running and I would always, let’s say 99 percent of the time, I’d pass the ball to Doc. And he [Dawkins] would say, ‘That Cheeks, he got one eye. The only eye he sees is Dr. J.’ … He got such a kick out of that.”

NBA Hall of Famer George “The Iceman” Gervin says it also was fun playing against Dawkins.

“It’s such a sad time right now, and yet, when you go down memory lane and think of him, you can’t help just smile and laugh,” Gervin said over the phone Thursday, a few hours after hearing the news about Dawkins’ death. “When he first showed up he was young, he was aggressive, he was talkative and he just loved to have fun. And oh, he was always witty. You say something and he’s got an answer right away. You mentioned something you saw and he could make a rhyme.

Coco Austin flaunts her curves as she poses with her daughter

Meet Claire Leeson, The Lady Who Spent £20,000 To Get A Kim Kardashian Look

Onyeka Onwenu, You were not sacked for being Igbo – Freeze