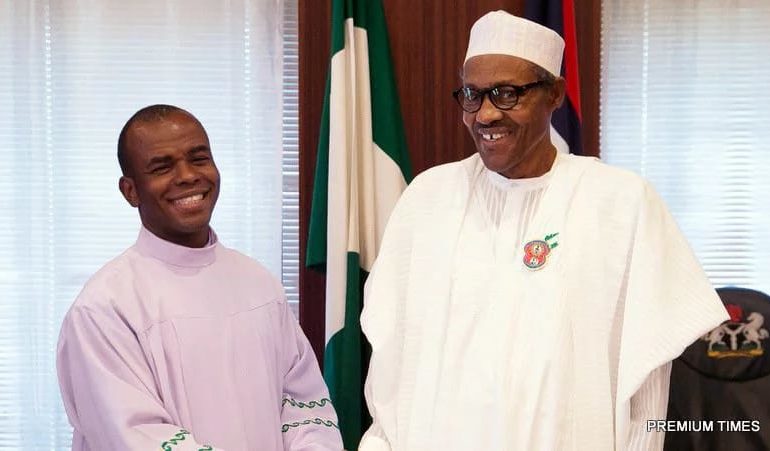 Editor’s note: Fiery preacher, Reverend Father Ejike Mbaka, Adoration Ministries, Enugu, advised members of his congregation to dissuade from cursing President Muhammadu Buhari. Mbaka said the president is a blessing from God to the people of Nigeria. His vocal support for Buhari’s government has drawn criticism from a lot of Nigerians, who urged him to separate politics from religion.

Okey Ndibe in this piece gives reasons why the Catholic priest should be summoned by security agents.

As a novelist, I frequently experience the sensation that I could never invent imaginative events that, in their tragic or absurd extraordinariness, can stand beside the strangeness of life as it is lived in Nigeria. Indeed, I follow public events in Nigeria with a certain sense that some grand master of fiction, versed in absurd tragedy, stands just out of sight to shape and orchestrate these events. For me, to read the pages of Nigerian newspapers is often akin to reading the most wrought fabulist fiction. Except that the events one encounters in news reports, bizarre as they may appear, are deeply rooted in and describe the shattering realities of Nigerians’ lives. These are often events that trigger the declaration, “Only in Nigeria…”

Before I get to recent illustrations, I must quickly cite some classic examples that have become so woven into the essential fabric of Nigerian life that they hardly strike Nigerians anymore as odd, much less astonishing.

It’s only in Nigeria that God “votes” in elections—and in fact casts the decisive vote. So, Nigeria’s election riggers invented the disingenuous mantra that only God gives power. If Candidate B is declared winner of an election, even though everybody knows Candidate A won it handily, all the imposter has to say to settle it all is “God has given me power.”

It’s only in Nigeria that public officials fatten their bank accounts from funds budgeted for public purposes—and then demand that the people whose lives they have impoverished must fast and pray for better electric power, to be spared death in road accidents or death in ill-equipped hospitals.

It is only in Nigeria that a governor would declare that he has “totally transformed” every sector of his state—and then promptly fly abroad for medical treatment the instant he experiences a headache.

It is only in Nigeria (as happened in Ilorin, capital of Kwara State in January 2009) that a commissioner of police would call a press conference and point to an “arrested” goat as a robber who turned himself into an animal just as pursuers were about to grab him. Newspapers around the world reported the absurd drama. It is only in Nigeria that the said officer would make such a global ass of a major national institution and retain his job.

Nigeria must be one of the few places in the world—perhaps the only one—where governors are effusively declared “performers” for paying the salaries of state employees. And if these governors happen to invest some funds in the rehabilitation of a few kilometres of roads, why, they are simply canonised.

Nigeria is arguably the world’s most notorious location where a mindless embezzler of public funds is no longer a thief if s/he belongs to the right (ruling) party, the right religion, the right state, and the right circles. Nigeria is a country where just about anything is rigged or riggable in favour of the rich and connected, where the police would hardly ever disturb the peace of a well-placed suspect, however grave the crime, and where many judges are only too willing (for the right price) to oblige well-heeled suspects and accused every manner of justice-evading legal gymnastics.

Nigeria is one address where proven fools and charlatans are revered and invoked while serious-minded people are disdained and ridiculed.

Last week, as I read numerous online news site, I was reminded of how absurdly fictive life in Nigeria can seem.

There was the case of Father Ejike Mbaka, a priest who has turned himself into a maestro of double-speak. And what’s Fr. Mbaka’s latest message? The priest claimed that some forces he did not name were planning to kill President Muhammadu Buhari in order to forestall the president’s anti-corruption policy.

The reverend, who fancies himself the vessel of divine revelation, urged his audience to refrain from speaking ill of the president. “So I want to tell you that, so far, God is happy with Buhari. And him whom God has blessed, may you not try to accurse, because God will curse you,” the priest said. And then he made the astonishing claim: “Many people are planning, as it is revealed, to kill him. There are many plans on how to eliminate his life so that corruption will continue, so that quantum embezzlement will continue. But the Lord says ‘God who put you there will not forsake you. Be firm, be resolute, remain focused, and be unbiased. Refuse to be intimidated and refuse to be distracted. Go ahead and war against evil. President Buhari, go ahead and war against corruption.’”

One is used to religious figures weighing in on political subjects. But Nigeria’s league of superstar preachers will claim the Olympic gold for making weird pronouncements in the name of divine inspiration. If any spirit, much less a holy one, told Mr. Mbaka about a plot to kill President Buhari, you’d think that the spirit would name names. You’d also think that the spirit, out of prudential concern, would counsel Mr. Mbaka to quietly take the names of the murderous plotters to the country’s law enforcement or security operatives.

To claim openly that a cabal was plotting to kill anybody, more so the president, is no joking matter. That kind of speculation or prophecy, taken seriously, could precipitate the flight of investment capital, the crash of the stock market. That’s why Nigeria’s security agents ought to summon Mr. Mbaka. They should demand that he give them the source of his information and identify the ostensible plotters. If he cannot validate his claim, then he should be unmasked as a trader in falsehood and fiction. At any rate, Mr. Mbaka’s supervising bishop ought to rein in the priest’s diarrheic mouth.

Mbaka’s astounding claim was far from the only event that provoked that phrase “only in Nigeria.”

Abdulmumin Jibrin and the illegal allowance of the lower chamber

There was the latest assertion by Abdulmumin Jibrin, a former chairman of the House of Representatives committee on appropriations. Late last week, Mr. Jibrin alleged that a few senior lawmakers had collected illegal allowances exceeding more than N10 billion. He said these legislators, including Speaker Yakubu Dogara, had bilked Nigerians out of billions of naira in the name of “office running costs.” To assure that he was not leveling the accusations lightly, he admitted that he, too, had collected N650 million.

I doubt that the Buhari administration, which bills itself anti-corruption, will react with anything more significant than a yawn. Officials of the ruling APC have already served notice to Nigerians that any allegations of corruption between party members would be treated as nobody’s business but the party’s. It doesn’t matter that the cash in question belonged to every Nigerian; the party, in the fashion of the deposed PDP, is determined to settle such scandals within the family. And I say, only in Nigeria.

And how about Governor Rochas Okorocha of Imo State? For weeks, the governor’s whereabouts were unknown. As speculations spread that the man was gravely ill, his spokesman stated that he was abroad harvesting foreign investment for his state. Then, last week, Mr. Okorocha reappeared in the state and admitted he’d been sick. “I went to the land of the dead and our ancestors turned me back, saying it was not yet time,” said the governor.

Who paid for this trip to the land of the dead? Whether the taxpayers of Imo State did or not, they deserved to be told the truth from the outset about the governor’s health condition. To be a governor is no part-time assignment.

And Mr. Okorocha should answer this: What has he done to ensure that those he governs have access to the kind of healthcare he received “in the land of the dead”?

Your own opinion articles are welcome at [email protected] — drop an email telling us what you want to write about and why. More details in Naij.com’s step-by-step guide for guest contributors.

Ladies Are More Than Men, I Do Not Mind Being A Second Wife – Nollywood Actress

Dear Ndigbo, can’t you see that Ambode and Lagos hate you so much?