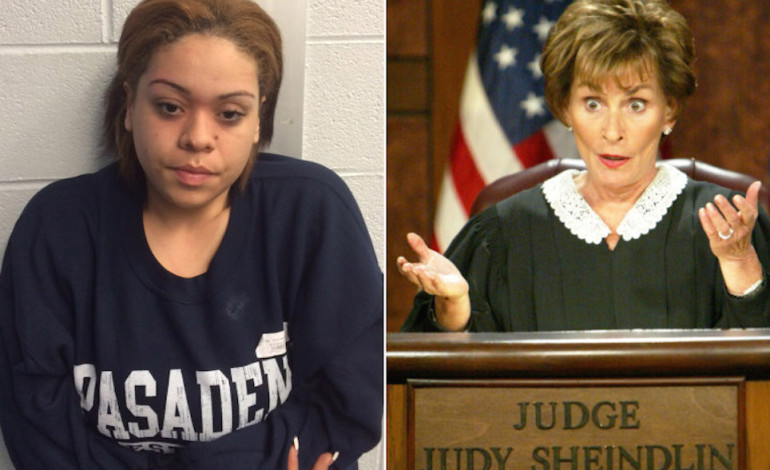 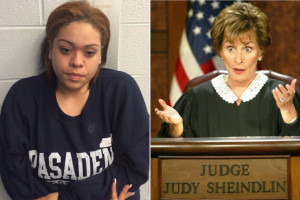 Melissa Perez was on her way home after appearing on “Judge Judy” when the alleged theft occurred. Photo: PAPD; Everett Collection

A Bronx woman, returning from Los Angeles where she had taped an episode of “Judge Judy,” was arrested at JFK for allegedly ripping off a flight attendant and another passenger at 30,000 feet, law enforcement sources said Thursday.

She has priors for various drug offenses, according to law enforcement records.

While in flight, a crew member noticed that her tote bag was missing, officials said. The pilot made an announcement over cabin loudspeakers, asking passengers to look out for that lost bag.

Then 45 minutes before landing, a passenger had found the cover of the crew member’s missing iPad, sources said.

The crew searched the immediate area and found the missing tote bag under seat 13A and eventually linked it to Perez, sources said.

While crew searched for the flight attendant’s bag, a 29-year-old female passenger noticed her US passport card and Bank of America card were missing.

That passenger said she took a nap and woke up to find her purse tampered with and the suspect nearby, law enforcement sources said.

Perez was also caught with 10 grams of marijuana, authorities said.

Reps for former Manhattan Supreme Court Justice Judy Sheindlin and the company that produces “Judge Judy” could not be immediately reached for comment on Thursday.

Finally! Ezekwesili speaks up on recession, lectures Buhari on economy (Read all she said)

EXPOSED: Lagos Massage Parlour Where You Get Séx As The ‘After-Service’ Bonus

Dabota Lawson Aku shows off inside her massive bathroom

Letter to single & married women from a single independent woman