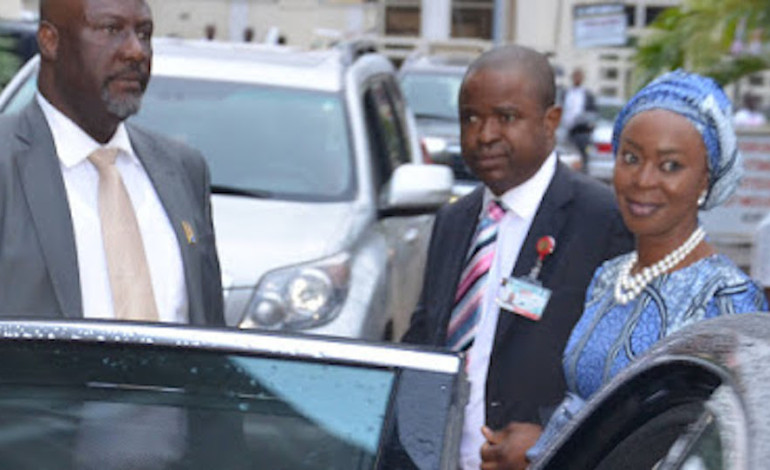 Read the press statement below…

Kogi West Senator in the National Assembly, Otunba Dino Melaye, has defended his recent visit to the Headquarters of the Economic and Financial Crimes Commission (EFCC), when wife of the Senate President, Mrs. Toyin Saraki, honoured the invitation by the anti-graft agency.

The chairman, Senate Adhoc Committee on Media and Publicity also challenged anybody who will controvert the truth that he has never done any government contract, either at the Local Government, State or Federal levels, to come foreward with evidence.

Melaye in a statement entitled: “Stand up for what you believe in regardless of the popularity or acceptance of your belief”, and issued on Friday in Abuja, said he has I made sacrifices to the extent of escaping assignations.

He said, “I chose to react to the attacks I have received Sent from my iPad

“I was arrested 14 times in one year by the administration of ex-President Goodluck Jonathan because I desire a country where my grandchildren (that I may never know) will dwell in a nation where life is already structured for them. I cannot throw away my sacrifice of being beaten and my clothes torn on the floor of the House of Representatives because of fighting against corruption. I have come too far to compromise my stand on corruption and corrupt persons.
“I make bold here to challenge anybody who will controvert the truth that I have never done any government contract, either at the Local Government, State or Federal levels. It is not criminal to do so, but he who must come to equity must come with clean hands. I have made sacrifices to the extent of escaping assignations. Will my fellow citizens forget all these too quickly on the altar of loyalty to friends, family and loved ones? My loyalty to friends is not only when the going is good. I will be there even when the roads are rough.
“The invitation of Mrs. Toyin Saraki by the EFCC, however, is not a criminal indictment. I will not abandon my friend because of mere EFCC invitation. I also went there as a private investigator and an anti-corruption crusader to find out the extent of culpability of my sister and friend since she was not told the content of the petition against her before her appearance before the EFCC.
“My definition for friendship is he or she who walks in when others are working out. If my father is invited by the EFCC, I will go there; if a prima face case is established against him, I will shout for his prosecution. So my great people, I have no regret following my friend and sister to the EFCC. If you are my friend, you are my friend. I cannot control what my friends will do, but they remain my friends. I am not fighting corruption out of passion only, but because it is the Godly thing to do.
“Finally, Winston Churchill said, “I may not believe in what you have to say, but I will defend to death, your right to say it.” No change of values, in the next few months ahead, Nigerians will those who want President Muhammadu Buhari to succeed. I promise to be with the people at all times, within the constitutional milieu. I thank you for taking your time. Be a change agent! God bless you and bless Nigeria.”
Sign…
Otunba (Senator) Dino Melaye
News

MUNA OBIEKWE: Why We Won’t Forget The Actor In A Long Time [PHOTOS + VIDEOS]

Rihanna confirms her relationship with Drake with a tattoo

Is This True that Rapper MI leaving music? See his tweet

See what Abia state governor did to a citizen (photos)