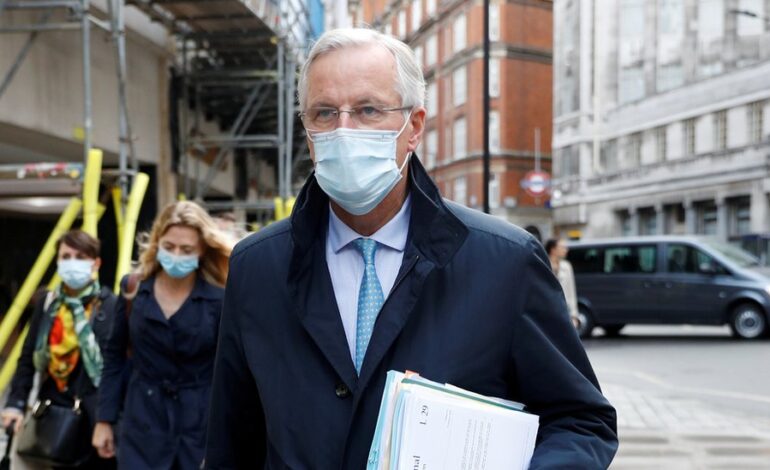 EU chief negotiator Michel Barnier will arrive in London later to resume talks over a post-Brexit trade agreement, after a week-long standoff.

The Frenchman will meet his UK counterpart Lord David Frost, after the pair agreed to restart face-to-face talks during a phone call on Wednesday.

Officials from both sides will hold "intensified" daily talks in the run up to December's deadline for a deal.

No 10 warned that "significant gaps" remain in the most difficult areas.

Negotiations stalled last week after a summit in Brussels where EU leaders called on the UK to "make the necessary moves" towards a deal.

But the UK side agreed to resume talks after Mr Barnier said "compromises on both sides" were needed, in a speech on Wednesday.

Both sides are seeking an agreement to govern their trading relationship once the UK's post-Brexit transition period ends in January 2021.

Key areas of disagreement include fishing rights, post-Brexit competition rules and how any deal would be enforced.

In a statement announcing the resumption of talks, No 10 spokesperson said it was "entirely possible that negotiations will not succeed".

But, they added: "We are ready, with the EU, to see if it is possible to bridge them in intensive talks."

In line with a demand made by the UK, both sides will resume talks on all subjects based on proposed legal texts prepared by officials.

They have also agreed that "nothing is agreed" until progress has been reached in all areas – which has been a key demand of the EU.

You could be forgiven for thinking that what we've witnessed over the past few days is a bit of political theatre.

Cover for the government – post chest-beating- to return to the negotiating table where they know the time has now come for tough compromises to be made.

EU leaders also went out of their way to sound tough on Brexit at their summit last week. Privately, a number of EU figures now admit it was a misstep.

But EU leaders play to the domestic gallery too. They wanted to show they were "standing up to the UK" – that leaving the EU doesn't pay and that EU interests would be defended.

The two sides have been at odds over the issue of so-called "state aid" rules, which limit government help for industry in the name of ensuring fair economic competition.

The UK has rejected an EU demand made earlier in the year for it to continue following the bloc's rules on such subsidies as part of a trade agreement.

Lord Frost has suggested the UK could instead agree "principles" for how subsidies are spent – something welcomed by Mr Barnier on Wednesday.

The two sides are also haggling over how much European fishing boats should be able to catch in British waters from next year.

The EU has so far resisted UK demands for annual talks to decide stock limits, as well as a reduction in access for its vessels to British fishing grounds.

By remaining in the bloc's single market and customs union, the UK has continued to follow EU trading rules during its post-Brexit transition period.

This 11-month period is due to end in December, and the UK has ruled out seeking an extension.

Formal talks began in March and continued throughout the pandemic, initially via video link before in-person discussions resumed over the summer.

If a deal is not done, the UK will trade with the EU according to the default rules set by the Geneva-based World Trade Organization.

Sweet Lady! Get Ready For A Dose Of Fashion Attack [ SEE Photos]

Cissy Houston: There’s ‘not a great deal of hope’ for Bobbi Kristina

EbonyLife TV launches on DStv in South and Southern Africa