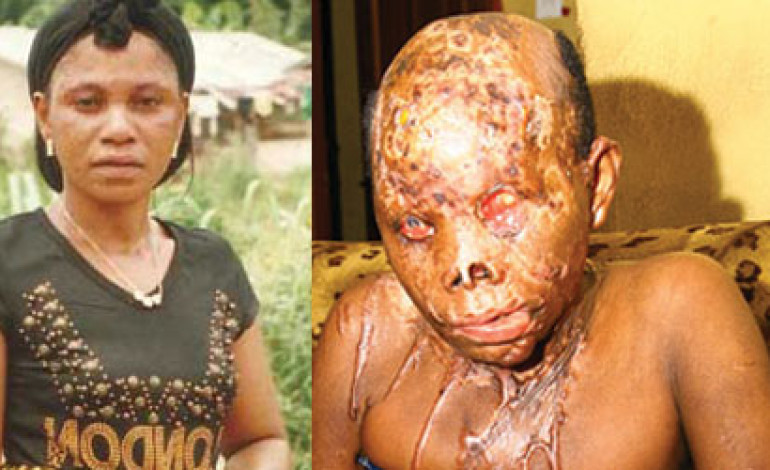 It was a day her vision was cut short and dreams shattered.  it was a day she hoped  never happened.

That was the day she her supposed lover poured her acid and disfigured her.

Paulina, an indigene of Kokori in Ethiope –East Local Government Area of Delta State, had fasted and prayed   on   August 27, 2010 during a church programme but next morning she was bathed with acid by   Mr. Difference Ogba,  her lover who knocked on her door at 5 a.m.

with one eye completely chopped off by the acid and the other blind but with chance to be restored.  Her two nostrils are also damaged with her skull grafted in efforts to save her.

Ogba is now serving a ten- year jail term in Okere prison in Warri after he was convicted by the High Court at Otu-Jeremi.

However,  pleas to well meaning Nigerians to come to Paulina’s aide have not yielded results four years down the line.

When Saturday Vanguard visited Paulina at her Okuokoko residence where she is staying with her elder sister, the story was that of agony and pains. But she remains hopeful that help could come her way to enable her to undergo a corrective PLASTIC SURGERY

to restore her severely damaged face and body.

According to her, “ my elder sister, Mrs. Kate Agbavwre and members of the Deeper Christian Life Ministry and Church of God mission have been helping me and I have great hope that help will come one day.  I can still see again.  Doctor confirmed that I can still see again but at  a very high cost. My faith is stronger now as I have taken God as my father.

“If Ogba repents and God forgives him, it is good for him.  I  have forgiven him.  God is the true judge. I leave him to his God. The incident has changed my perception about life and my faith in God has grown.”

Back in 2011,  after the attack, the once beautiful woman   who men found irresistible   was a shadow of her   former   self after she was discharged from University of Benin Teaching Hospital, UBTH, Benin City.

Paulina, a divorcee and mother of three needs a lifeline of   N10 million to restore her dignity.

my husband with whom I had three kids after irreconcilable differences and incompatibility . I relocated to Ujevwu   in Udu Local Government Area of Delta   State. There, I   began selling meat at the Warri Refinery and Petrochemical Company, WRPC, area, a business which sustained and provided for my needs as the kids were with their father.

“After about six months, my church members alerted me that Ogba whom I was dating was married with wife and four kids. I trailed   him and got the truth and I told him to leave me alone, but he refused. His wife got wind of our relationship and started coming to abuse me at home.   I   told Ogba to leave me alone, but he refused. He went to disturb my pastor. The pastor asked him to leave me alone, but he would not listen. They beat me up and took my money (N30,000).   I reported to the leadership of Egini community. They reprimanded him but he would not change his mind. This started the    he, as a motorcycle rider(okada) conveyed me home. He identified himself as Mr. Difference Ogba, and   told me   he was resident in Egini, a neighbouring community to Ujevwu. He said he was not married. He picked interest in me and I told him I   was   a divorcee. He said he did not mind.

I had to leave where I was staying just to escape from him. He found out where I was and continued making trouble. He said that I must marry him. He would not leave me alone. I had    packed out to Ekrokpe Community in Ughelli-South Council area.

After about three months, he found out where I moved to and he came again. I chased him away but he continued disturbing me until my landlady got tired and   threatened to give me a quit notice. I continued to chase him away any moment he came around and my landlady later joined me in chasing him away, till he stopped.

. I fasted and went for our Wednesday prayers in my church (Church of God   Mission). I   prayed to God to chase away Ogba completely from my life.

I went to sleep early that evening as I had my plans for the next day. I wanted to go to the MARKET

and sell and, on return, cook and eat my choice soup (banga). But very early in the morning, August 28 , at 5 a.m, I heard a sharp knock on my door and the voice of a woman I knew. I was shocked because she resides in Egini. I was wondering how she came to Ekrokpe that early.

Immediately I opened the door,   I was poured something (acid) on my head and face.  I shouted for help and fainted.   I woke up two days later at UBTH to discover that Ogba was the one who knocked on the door and poured me acid.” Ogba fled after the incident.

“I have gone through excruciating pains as I had to undergo three different surgeries. Flesh was cut off from my lap to patch my head and lip. My skull was operated on.   I weaved my head a night before but the acid that soaked on my head burnt it. I saw death but God did not allow me to die. I cursed the day I met Ogba.    I regret meeting him and I am still baffled that he did this to me. He neither drinks nor   smokes. I am not aware that he had or has mental problem. So, it is like a bad dream. How I wish it is a dream. I can’t see. I’m almost BLIND

Paulina’s elder sister and member of Deeper Life Bible Church, Mrs. Kate Agbavwre, who resides at Okuokoko community, said, “I was at home on August 28 , 2010,   when, in the early  morning, our mother came to tell me that my sister was bathed with acid by her lover and she was brought to Kokori. We rushed back there and took her to hospital in Okpara Inland. The next day, she was referred to UBTH.

“At UBTH, life was terrible for my sister as many never believed she will survive, even some relatives’ advised that she be left to die. But I stood by her. I had to BORROW MONEY

to save her life. I borrowed about N500,000 to buy drugs and blood. Things got hard and I had to liaise with my family to sell our land at Kokori. We were billed N665,000 for the bed, treatment and feeding for the one year.”

How Ogba was trapped and arrested

According to Mrs. Agbavwre, “When the incident occurred, the landlady promptly reported the incident at the Ekakpamre Police   Station and the case was transfered to the Otu-Jeremi Divisional Headquarters. The police swung into action and arrested two members of   Ogba   family, who were eventually released on bail with a condition to look for   the suspect in two weeks.

‘’After a month, I came back from UBTH and a lady from Ogba family came as a spy to inquire if Paulina was dead or alive. I sensed her mission and I told her that Paulina was alive and had been discharged from hospital. The lady then said she was going to meet their family to see how they could come for settlement.

The following day, the family came to my house and I told them the truth that Paulina was in critical condition at UBTH. On hearing my report, the family said they would come back again, but they never did. Back at Egini, Ogba was planning to sell his house so that he could flee from his hideout. The   family told him that he should come so that they would plan on how to settle the matter. Then, they alerted the police who mobilised and laid ambush for him. He was apprehended and taken away. Later, he was transferred to the   state   Police Command in Asaba, but we heard that he is being remanded at the Okere Minimum Prison in Warri.”

“We are pleading with the government, non-government organizations, Niger Delta Development COMMISSION

, Delta State Oil-Producing Areas Development Commission and other public-spirit organizations and persons to come to the rescue of our sister. We were told that corrective surgery can help rescue my sister but the cost   is   too much for us.

We do not have the resources to do it but we call for help. We have been told by the doctor that one of her eyes can be restored through surgery but it will cost so much. We need help so that at least she can see again”.

Do You Want To Know The TRUTH About P'Square?

Dear RoyaltyGist readers: My husband called me ode for texting his mistress

Sports Watch: Mikel Pops His Cherry as Blues Make It Through