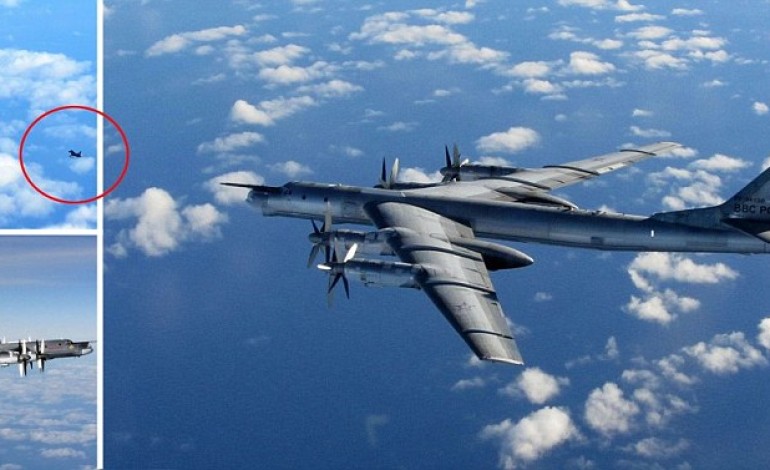 Nato has sounded a warning after 26 Russian bombers, tankers and fighter jets on military exercises were intercepted around Europe in just 24 hours.

Jets were scrambled by the RAF and allies in Germany, Portugal and Turkey after the ‘unusual’ spike in activity, which saw two giant Tu-95 Bear H bombers fly close to Britain yesterday.

The alliance said Russia had conducted ‘significant military manoeuvres in European airspace’ – though it then added none of the planes had strayed into any specific country’s territory. 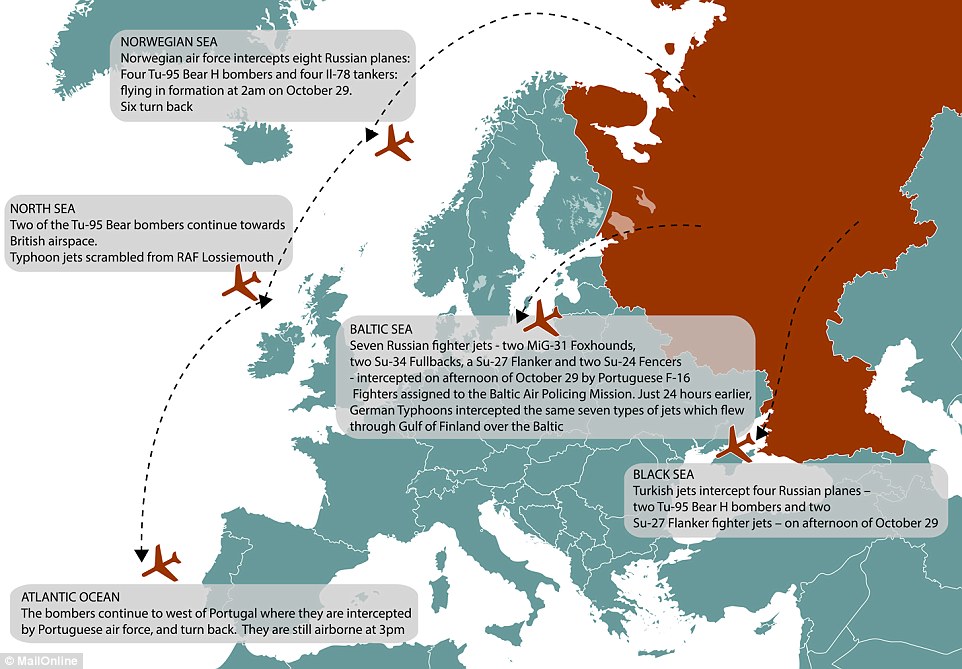 Military manoeuvres: Nato has sounded a warning after 26 Russian bombers, tankers and fighter jets on military exercises were intercepted around Europe in just 24 hours. Above, a map of all the activity reported by the Nato alliance between Tuesday and Wednesday afternoon 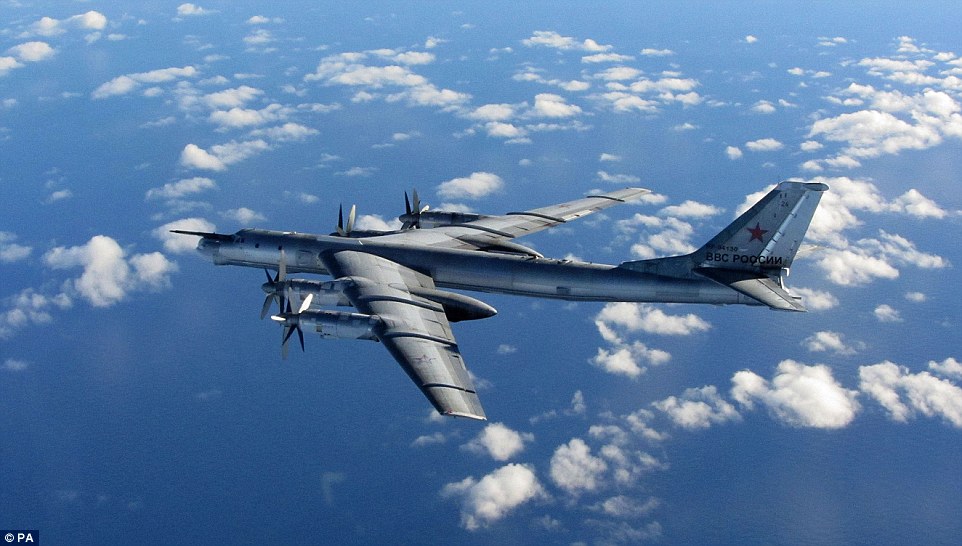 Closely watched: RAF Typhoon jets were scrambled yesterday to track this Russian Tu-95 Bear H bomber, one of two which flew close to Britain without filing flight plans or communicating with air traffic controllers. Some 26 intercepts were made in around 24 hours, said Nato

The two Bear bombers had been part of an eight-plane formation which was first intercepted by Norwegian F-16s over at 2am yesterday.

While six of the planes returned back towards Russia, the two Bears carried on south west towards the UK where they were picked up by RAF Boulmer, Northumberland.

Chiefs the scrambled Typhoon jets from RAF Lossiemouth in Moray, northern Scotland, which tracked the Bear bombers as they continued through Britain’s ‘flight information region’.

Nato said: ‘The bomber and tanker aircraft from Russia did not file flight plans or maintain radio contact with civilian air traffic control authorities and they were not using on-board transponders. 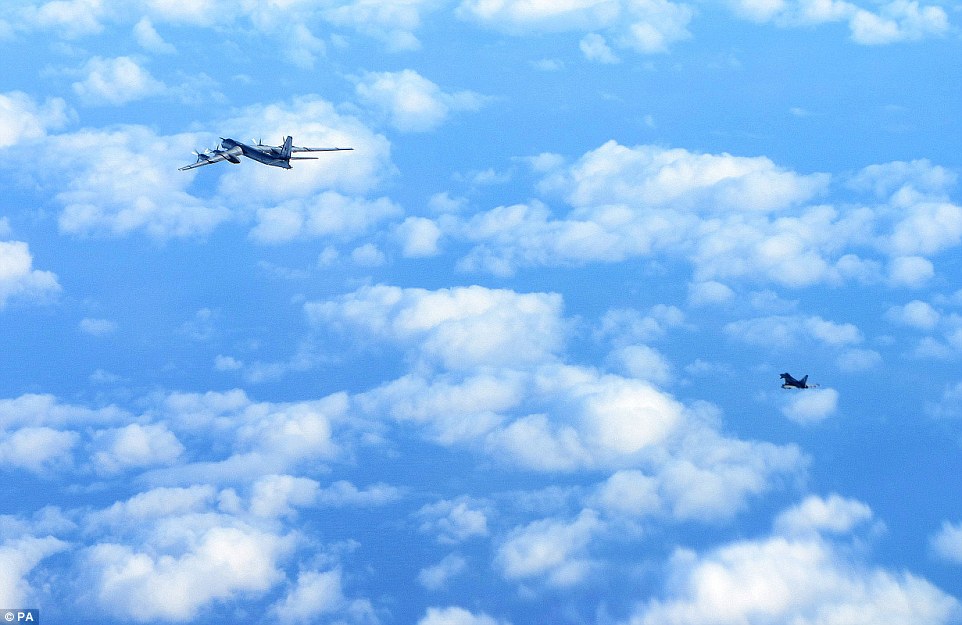 Followed: These images were all issued by the RAF and showed the moment the aircraft were escorted by Typhoon jets near British airspace 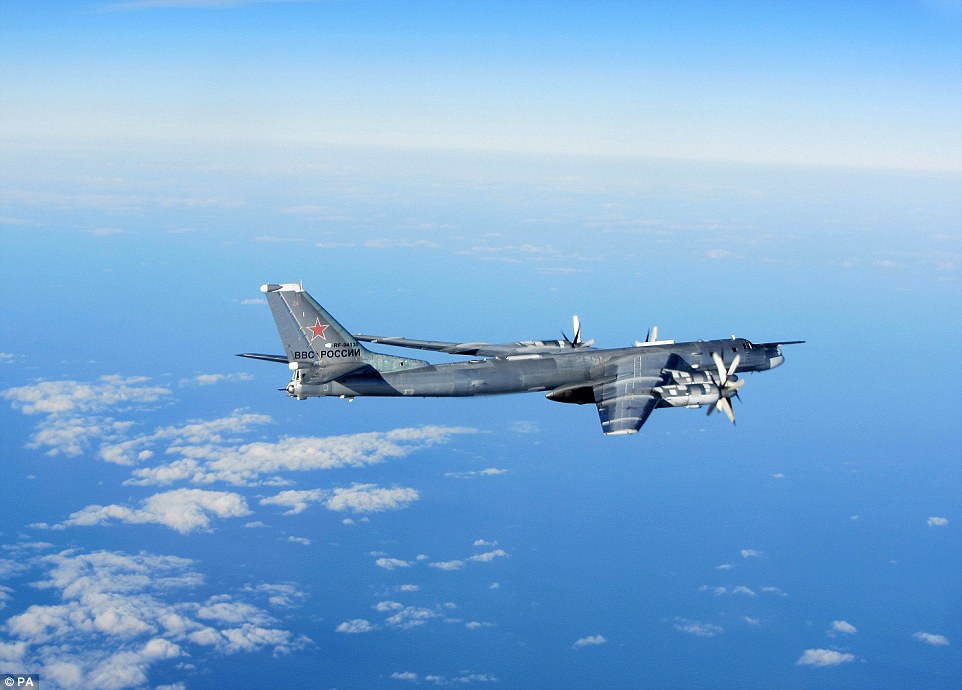 Nato stepped up defences and said: ‘These sizeable Russian flights represent an unusual level of air activity over European airspace’ 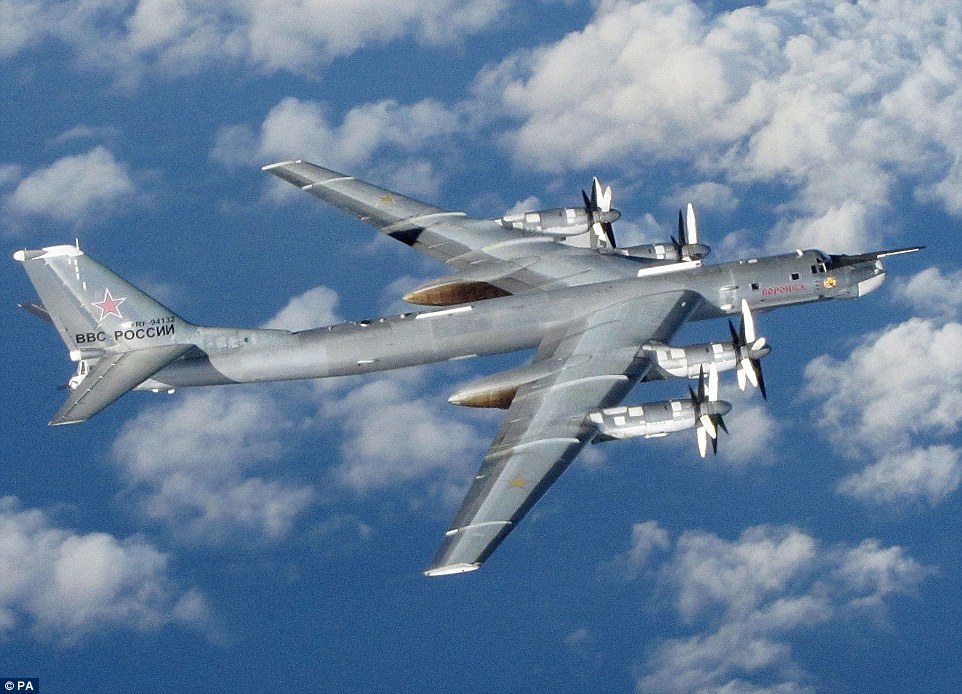 The bombers continue to Atlantic where they are intercepted by Portuguese air force, and turn back. They are still airborne at 3pm

The British Typhoon pilots identified the Bear bombers visually and ‘escorted’ them around the edge of British airspace, a Ministry of Defence spokesman said.

The Bears then continued towards the Atlantic to the west of Portugal, where they were intercepted by Portuguese F-16s before turning back.

They appeared to be heading back to Russia but were still airborne by 3pm.

But the alliance added that all the planes intercepted were, in legal terms, still in international airspace.

Russian bombers and jets were also intercepted over the Baltic and Black Seas between Tuesday and yesterday afternoon.

Some 26 interceptions were made in the space of just 24 hours, although seven could have been the same planes returning to the same area.

More than 100 Russian planes have been intercepted by Nato this year – triple the number in the whole of last year.

The movements come after months of heightened tension between Moscow and the West following Russia’s annexation of Crimea and military incursion into Ukraine.

Nato’s new chief said today the alliance is increasing its readiness and air policing after yesterday’s flurry of activity.

Jens Stoltenberg said that while Nato is not back on a Cold War footing with Russia, its former arch-enemy as the Soviet Union, recent behaviour has severely undermined mutual trust.

‘We need to keep our forces ready, therefore we are investing in high readiness, new capabilities,’ he said.

‘We are… increasing air policing as an answer to the increased air activities we are seeing from Russia.’

He also urged Russia to remove its forces from Ukraine – Russia denies they are there – and warned against plans by pro-Russian separatists to hold local elections in eastern Ukraine. 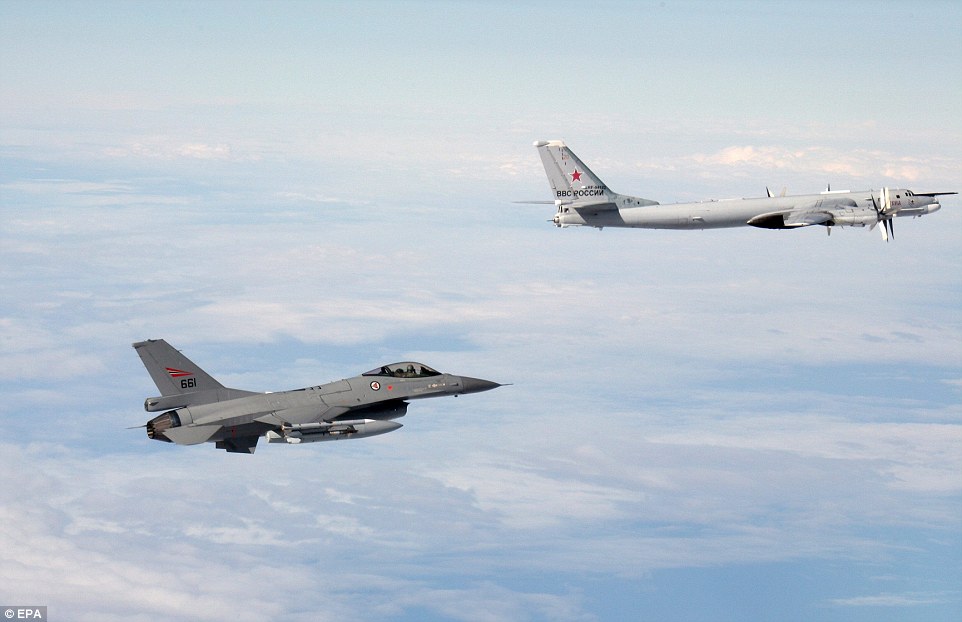 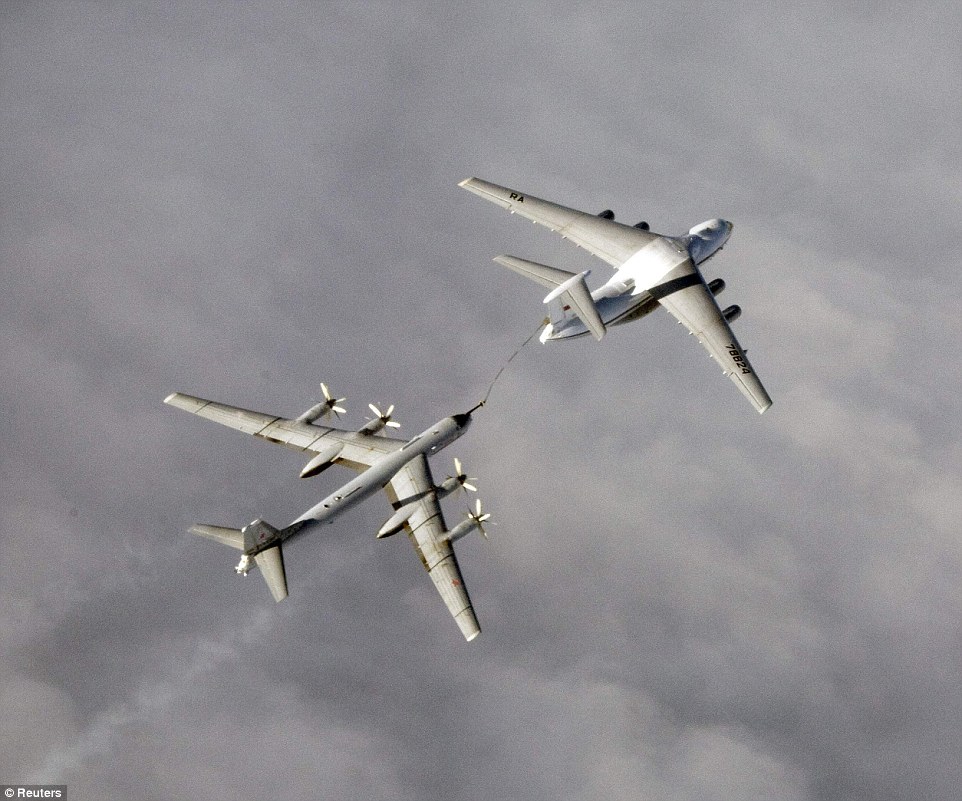 The interceptions yesterday were unrelated to a sonic boom caused by RAF fighter jets which shocked residents across Kent.

Typhoons from RAF Coningsby, Lincolnshire, flew to Kent at supersonic speeds to dramatically halt a Latvian cargo plane on its way to Birmingham after it ’caused concern’ to air traffic controllers.

The swoop, which resulted in the Lativan-registered plane being grounded at Stansted airport yesterday evening, sparked a massive sonic boom which was heard across a 50-mile radius.

Soon after the incident, an unverified audio clip was posted online which appeared to have recorded the moment an RAF pilot warned the plane it risked being ‘shot down’.

A man was heard saying: ‘I’m instructed by Her Majesty’s government of the United Kingdom to warn you if you do not respond you will be shot down’. 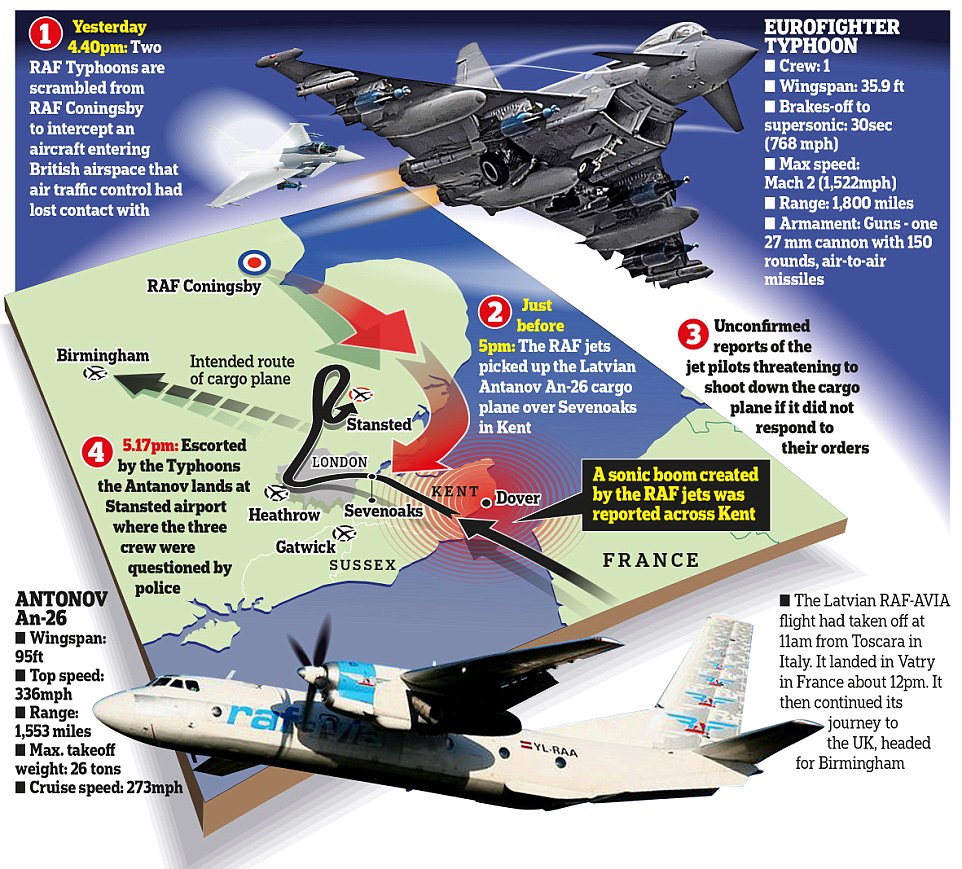 The incidents happened on the same day Kent was rocked by a sonic boom as a Latvian cargo plane was intercepted, but were unrelated 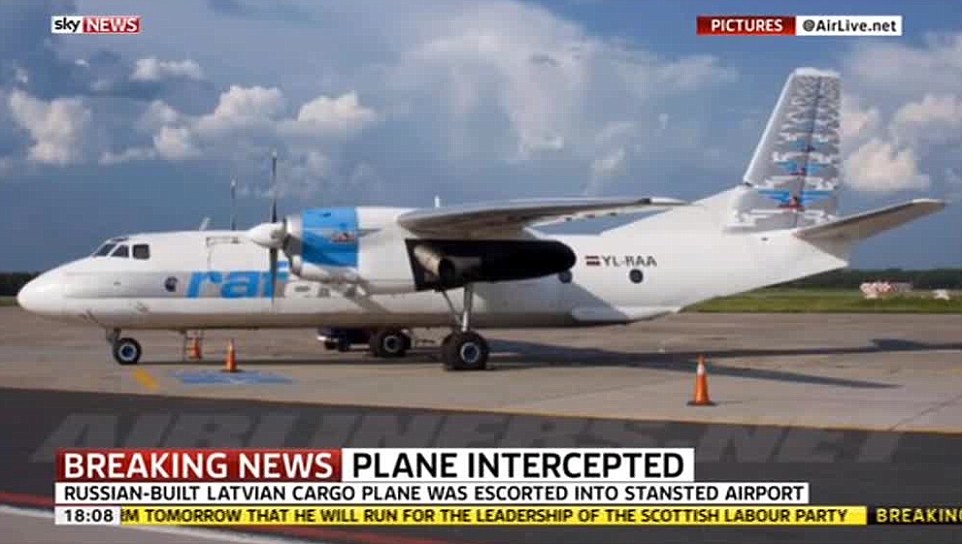 Grounded: The Latvian Antonov An-26 cargo airliner (pictured) was escorted into Stansted Airport after causing a brief scare yesterday

The interceptions were also not said to be linked to another huge sonic boom heard yesterday over the Outer Hebrides.

The blasts rattled buildings and left islanders shaken from Benbecula and Barra, a distance of more than 55 miles.

At first locals thought there had been a blast at a local quarry or military ordnance blown up at a beach – but the RAF later said it was ‘most likely a supersonic jet belonging to the RAF or US Air Force on a routine training flight’.

A spokesman added: ‘These flights take place all the time around the UK and we don’t announce them. To hear a supersonic boom is rare. However in certain climatic conditions they can be heard and this is what most likely happened in this case. It was probably us.’

Sheila MacCormick, of the Borrodale Hotel in South Uist, said: ‘The actual building shook. When we looked out there was people walking on the road – who were standing looking around to see what had happened.’

MILITARY EXERCISES AS TENSIONS MOUNT WITH NATO OVER UKRAINE

The exercise is a rebuke to Nato, which was founded as a Cold War-era defence body in 1949, less than a week after it insisted the Russia still had troops in eastern Ukraine.

Russia strenuously denies the claims – but Nato said although it has withdrawn ‘partially’ it still maintains a capable force on the border.

Some Russian troops stationed near the Ukraine border had left and some others appeared to be preparing to leave, he said.

‘But the force that remains and shows no indications of leaving is still a very, very capable force and remains a coercive capability to the nation of Ukraine.’

Is Adam Sandler dead? The internet goes crazy about this break out

What?! This Woman With GIGANTIC BOOBS Wants Them Even Bigger [PHOTOS]

Man Kills Fiance and Tells 10-Year-Old Daughter, ‘You Have to Die Too!’

Good news! American Doctor with Ebola to be Released from Hospital Today