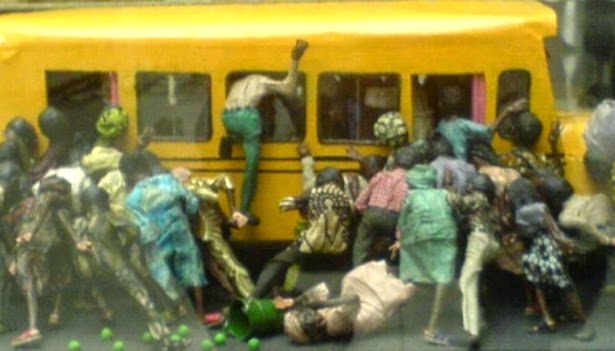 In his latest piece in The Punch, singer turned columnist, Etcetera, takes on something more interesting:

Few weeks ago, I got a call from a friend asking me out for a drink, but I was already at the Lagos airport. “I’m not going to be around for the next few days,” I told him. “I’m going to Abuja.” His immediate reaction was: “Why? What’s wrong? Do you want to bore yourself to death?” That’s the typical response I get whenever I tell someone I am travelling to Abuja. Abuja is a beautiful city with a terrible reputation for boredom. I have heard people in other cities speak of Lagos as a noisy, dirty and dangerous city filled with crazy people. In truth, everyone in Lagos is crazy.

What else do you expect in a state crammed with 22 million people?
It must be a hell of a job for the governor and his officials keeping everyone under law and order daily. Lagos has a peculiar vibe that can’t be found anywhere in the world, so much that “Lagos Hustle” is a commonly used phrase among Nigerians. I would rather go crazy living in Lagos than be bored to death in Abuja, Ibadan or Enugu. Abuja leaves you chewing your finger nails out of boredom. If you doubt me, whenever you have a visitor from Abuja, check his/her finger nails. They are always short and well chewed. Even the Hausa local nail trimmers have all migrated elsewhere due to the nail scarcity.

It is said that people in Lagos argue for at least two hours daily. It is true; we love to generate arguments out of everything. We argue everywhere; in buses, during church services…

Now Telemundo has become a cause for more argument among the girls here. So why are they surprised that we are crazy in this city? How many people can stay sane for long with the screams of Telemundo girls and the wailing sirens of police and government officials constantly beating their eardrums? Even the supposedly rugged Lagos rats can’t bear it too, that’s why they are always scampering from one gutter to another. If only we can understand what those rats would be saying to themselves about the cars with wailing sirens and flashing blue lights which have now become the city’s official ride for big boys. Don’t they know that it is by far the easiest way to advertise their arrivals to all the criminals in the city?
Let’s add all the roaring vehicle engines, blaring horns, the arguments of the association of free newspaper readers at every bus stop, the street preachers with megaphones every morning, the open trucks filled with dancing skimpy dressed models selling almost expired products, or the rickety tortoise cars with dead PA system selling gbogboniseand the CD/DVD sellers blasting latest naija vibes. Anybody expecting to find a sane person in Lagos must be crazy indeed. It is like looking for a virgin in Nollywood. It is a city with an official soundtrack emanating from millions of generators rumbling constantly all through the day and night.
But as crazy as it is in Lagos, I love it. I love the fact that it is like the city is divided in two halves, for non smokers and smokers. Or how can anyone explain to me why Apapa is always covered in thick smoke? Call it trailer exhaust fumes or smoke from burning tyres, what I know is that whenever I am passing through Apapa, it is as If I have suddenly walked into the smokers section of a night club.

I love the fact that this city doesn’t discriminate. And that all the money of the rich offers no protection from the most trying aspect of life here. Aggression is imperative and timidity on the road is seized upon by everyone even pedestrians.

When driving, you are caught up, over-taken and honked at all at once. All drivers seem to be afflicted with honk sickness. You get in a taxi late at night when there isn’t a single other car on the road, and the driver is still blasting his horn at five seconds intervals for the entire journey. It is even worse when the traffic is gridlocked. Ask the millions who experience this bottleneck from the mainland to the commercial districts on the Island daily.

A guy dropped his friend at Lagos airport to catch a flight to South Africa. When he received his text message saying he had landed safely at Joburg airport, he was still in traffic on the way back to Victoria Island.

We don’t have much of a tourist industry in Lagos at the moment but thank God for Makoko, an extraordinary floating slum, where everyone travels round in boats. It is our own version of Venice. Thanks to the governor, the dividends of democracy can now be felt in some places in the city. Let’s take the Ojota dump site for example, it has become symbolic of everything that past governments have tried to achieve. What used to look at first sight a rough, lawless, dangerous place has become a well-organised place where good money is earned by local street boys who now prefer a life of grime to a life of crime. Some of them are university graduates.

Lagos is a shining example of democracy. Even the area boys and those scavengers on the streets for things to re-sell have their own democratically elected chairmen, who sort out any arguments or disagreements.

Don’t you love the look of today’s Oshodi, especially when you are standing on the bridge feeding your eyes with the wonderful mosaic of human beings like a colourful artwork? The traders are constantly feeding energy into the atmosphere with their hilarious but innovative marketing methods, giving visitors from various parts of the world a first hand view of how lucrative and conducive this city is for their businesses. But it is imperative to have lots of patience and a good sense of humour to survive here.

Planning is crucial if you want to get things done. You must make contingencies because most of the time things don’t go according to plan, whether you are caught in argument or in traffic. For tourists, it is important to note that there are no up-to-date visitors’ guide on sale anywhere. And the few guidebooks available do not pretend to over-sell the city’s destinations. But one thing you won’t need guidebook to notice are the mechanic workshops littered all over the city. The good thing about this is that whenever you go hungry, just walk into the nearest one and you are sure to find a mama-put (restaurant).

Lagos is noisy, polluted, corrupt, lawless and ungovernable, but beneath these stereotypes are some of the most hardworking, passionate and big thinkers on earth. Thousands of people make their living by selling all kinds of stuff in traffic jams: household provisions, mobile phones, electrical appliances, wrist watches, books, clothes, popcorn, machetes, soup ingredients, wheel chairs, rat poison, CDs, DVDs, pets, you can even buy a brand new car in traffic. It is quite innovative and convenient because most Lagos residents prefer to do their shopping on the go.

I love Lagos because this is the only city in the world where you can leave home for work stark naked and be sure to buy everything you want to wear in traffic. They’ve got ironing boards too in case you want your clothes starched and properly ironed. Eko o ni baje oo!

Update: Photo of Muna Obiekwe on a dialysis machine, prior to his death

Soul of the US Open 2016: Serena Williams Still Chasing History

Video: ‘My role with Jim Iyke is not a S3x tape’ – Nikki Samonas

A thumbs up for the camera after storming the fence: Migrants celebrate successfully charging barrier separating Morocco from Spanish enclave

Kim Kardashian Can’t Get Pregnant Again; And She Is Upset!