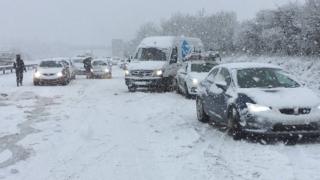 Commuters are being advised to check their routes before travelling as snow and ice affect roads and railways.

An amber warning for snow in parts of south-east England is due to last until 11:00 GMT, while a yellow ice and snow warning covers north and east Scotland as well as areas in England and Wales.

More than 400 schools have been closed in Wales, with more closed in areas of England including Cornwall.

Great Western Railway said services could be disrupted until 13:00 GMT.

Transport for Wales expects some routes to be affected until 14:00.

In Cornwall, more than 100 people spent the night at the Jamaica Inn pub after their cars became stuck on the A30.

The Met Office has warned of "treacherous driving conditions" in some southern areas.

Elsewhere, Bristol Airport has suspended all flights until 12:00 GMT while snow is cleared from the runway. Passengers are being told to check with their airline before travelling.

British Airways has cancelled dozens of flights from Heathrow Airport on Friday morning.

The South West was worst affected on Thursday night. Snow depths of 12cm (5in) have been recorded in Bodmin, the Met Office said. Parts of Cumbria have seen 8cm of snow, while there was 7cm recorded in Inverness-shire and 5cm in Powys.

Sammy Wheeler, who runs the Jamaica Inn, said some of those who spent the night had walked "a good three, four or five miles" through the snow to get there.

All 36 rooms at the pub were occupied overnight, with some shared by strangers. Two makeshift dormitories were also set up in the restaurant and lounge areas to help look after the guests, who included children and an eight-month old baby.

"We kept the kitchen open all night and people were playing games in the bar until the early hours in the morning."

Paula Martin, chief executive of Cornwall Air Ambulance, was in one of the cars that got stranded on the A30.

"I got within two miles of home and the snow arrived very quickly and very suddenly," she said.

"Within minutes the A30 very quickly became impassable, especially for the lorries – and it went from bad to worse."

Temperatures fell to their lowest level this winter, with Braemar, Aberdeenshire, dropping to -15.4C (6F) in the early hours of Friday.

This is the lowest in the UK since 2012 – when temperatures fell to -15.6C in Holbeach, Lincolnshire.

British Airways advised customers to check their flight status for cancellations and said people due to travel on short-haul flights were being offered the option to postpone their journey.

"Safety is always our priority, and we're working hard to keep our operation moving. We're sorry that some of our services are being delayed by the weather conditions," a spokeswoman said.

Southeastern Trains said it will run its "winter weather timetable" on Friday – adding: "All of our London stations will be open, but there may not be direct services on all our routes and you may have to change."

South Western Railway has warned passengers that some early trains may be cancelled on Friday morning while the tracks are checked and cleared.

Snow is forecast for central-southern England on Friday morning – with up to 10 cm (4in) possible across higher ground.

This snow in the south will ease through the morning, but much of Scotland and the North East of England will see snow showers continuing into Friday.

What warnings are in place?

There are yellow warnings for snow and ice until lunchtime on Friday in large parts of Wales and England, including London, and northern and eastern Scotland.

They warn of some snow, but not prolonged falls, and say some stretches of road will be icy.

You can read the Met Office guide to its warnings here or watch our handy breakdown.

Compare the temperature where you are with more than 50 cities around the world, including some of the hottest and coldest inhabited places. Enter your location or postcode in the search box to see your result.

If you can't see the calculator, tap here.

Has your travel been affected by bad weather? Tell us by emailing [email protected].

3 Ways To Win The Heart Of A Strong Black Woman

If FG believes APC leaders are terrorists, they should produce evidence - Atiku says

What Buhari should do with Tompolo, Asari - Dein of Agbor