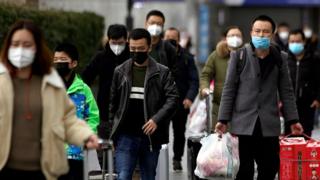 All Britons in China should leave the country if they can to minimise the risk of exposure to the coronavirus, the Foreign Office has said.

The Foreign Office said it continued to work to evacuate Britons from Hubei province where the outbreak began.

Commercial flights are available from other parts of China.

At least 427 people have died after contracting the virus and there have been more than 20,000 confirmed cases, most of them in China.

There are an estimated 30,000 UK nationals in China, ministers have said.

Foreign Secretary Dominic Raab said: "We now advise British nationals in China to leave the country if they can, to minimise their risk of exposure to the virus.

"Where there are still British nationals in Hubei province who wish to be evacuated, we will continue to work around the clock to facilitate this."

The change in advice comes as China's most senior leaders, including President Xi Jinping, admitted there were "shortcomings" in the way the country dealt with the new coronavirus outbreak.

The virus has now spread to more than two dozen nations, including two cases in the UK.

However, the World Health Organization (WHO) said it does not yet qualify as a "pandemic". This is only declared when there are sustained outbreaks within communities in multiple parts of the world, according to the WHO.

Previously the Foreign Office had advised against all but essential travel to China, while warning against any travel to Hubei province, including the city of Wuhan.

BBC China correspondent Robin Brant said the new advice was "not because we've seen a sudden increase in the severity of the outbreak of the virus".

Instead, he said it appeared to be prompted by the Foreign Office organising what it was calling "the last flight" to evacuate Wuhan.

The UK was also moving non-essential staff out from its embassy and consulates in China, so "there are fewer people who can help any Britons in distress", he said.

One British man in China who fears he contracted the new coronavirus in November said he has been given no indication of when he will be able to leave Wuhan.

Jamie Morris, 23, from Tredegar in South Wales, said he had not been able to return on recent flights because he had given his passport to Chinese authorities to extend his residency permit.

"I am currently on my own in my apartment, isolated from the outside world," he said.

Some Britons in China told the BBC that they intend to stay despite the Foreign Office advice – while others questioned whether it was possible to leave.

Music teacher Sam Mulliner and his wife, Rebekah, work at an international school in Shanghai and say it is not easy to "just get up and leave".

"I feel like I want to stay here and support my Chinese colleagues," he said, adding that there may be more risk of infection on a plane.

John Hall said he wants to return to the UK with his Chinese wife and his three-month-old daughter from his home in Zhanjiang.

But he said he cannot travel the six hours to the nearest embassy to get the paperwork and feared his daughter is "much too young" to fight the virus if she should contract it.

On Friday, 83 UK citizens were repatriated on a flight out of Wuhan arranged by the UK government. Another 11 Britons joined them on Sunday on a French flight.

They are now in quarantine at Arrowe Park Hospital in Wirral for 14 days – the incubation period of the virus – to ensure that they are not infected.

Mr Raab told the House of Commons that there were another 14 places for British citizens on an Air New Zealand Flight on Tuesday.

But shadow foreign minister Afzal Khan said the evacuation of Wuhan had been a "shambles".

Two people, a student at the University of York and one of their relatives, are being treated for coronavirus at the specialist infectious diseases unit at Newcastle Royal Victoria Infirmary.

They are the UK's only two confirmed cases, with 414 people testing negative for the virus, according to the Department of Health and Social Care.

Are you a British citizen in China? Will you leave the country? Share your experiences by emailing haveyoursay@bbc.co.uk.

Or use the form below

UPDATE: Why We Put Olisa Metuh In Handcuffs

Football Legend Pele “Getting Better” After Being Admitted Into Intensive Care